The latest episode of Doctor Who has Babbage, Baggage and Techno-babble, but few answers...

As Daniel Barton’s plane plunges to Earth – with Barton and the Master (for it is he!) safely beamed away and the Doctor finding herself between dimensions, it seems some quick and unlikely escapes are desperately needed. Both Ryan and The Doctor find help via unexpected people but that’s just the beginning of the team’s problems.

A race against (and across) time begins with The Master in hot pursuit and enjoying the thrill of the chase… and Graham, Ryan and Yaz trying desperately to curtail an invasion in the present – much hampered by Barton’s tech.

This second episode is certainly a whirlpool of ideas, all of them spinning fast and fun, yet none of them quite standing up to deeper scrutiny. There’s very much a series of nods to Who series past: the time-travelling and fixing things before they’re broken is very Curse of the Fatal Death and video instructions are very Blink. The Doctor and Master trade insults atop the Eiffel Tower (a moment, location and a conversation that should be truly epic but settles for interesting) and there’s even a reference to Tom Baker’s final story (Logopolis), Jodrell Bank and the villain’s role in causing that regeneration. It’s a nice touch but one would think the nostalgic talk would rather turn to ‘Didn’t you-twice-removed kill you once-removed last time out?‘ but on that ‘escape’ there’s naught to be found (unless of course, this is a post Anthony Ainsley, pre-Derek Jacobi incarnation which could be interesting)…

But the episode is as much a mess as it is a romp with askew logic (the whys, hows and whats just don’t add up) and a centre that can’t quite hold. The interdimensional ‘bad’ guys, now named as the Kasavin, remain something of an enigma, giant globs of light with some vague handwavery infiltration agenda that the Master says he hijacked for his own ends – and frustratingly, the Doctor essentially defeats them off-screen. Aspects such as Yaz, Ryan and Graham being fugitives is a big deal ™ until it’s not, the Master hanging out with Nazis is treated as little more than an ironic punchline and the idea that the villain hung around for around 80 years without doing anything globally-nefarious is a bit unlikely, though perhaps fodder for Big Finish audio outings.   Starting with a plunging airplane in the present it then skims through two centuries, ricochets across dimensions like a scattershot Bill & Ted, picking up two key real-life women from history (Sylvie Briggs as the first ‘computer programmer’ Ada Lovelace and Aurora Marion as WWII agent  Noor Inayat Khan who each might have made interesting full-time crew-members. Indeed, Lovelace was actually featured in a Fourth Doctor audio outing.) But after extolling their brave and forward-thinking importance, the over-stuffed episode really giving them little more than exposition in the latter third which makes it doubly a wasted opportunity.  Lenny Henry shows much promise, particularly with a monologue about how his character Daniel Barton exploited social media tech, but the screen-time given to Dhawan precludes much character-development for anyone else and after killing his mother for no real plot reason Henry’s Barton eventually scurries off-screen for hopefully a better appearance later in the run?

Thankfully, Whittaker finally gets to balance the zany with some deeper stuff – though none of the monologing and anecdotes so far feel quite as natural as some of her predecessors. The episode also sees The Doctor and her ‘fam’ separated for all but the closing minutes and though it gives her companions time to discuss how little they really know about her, it’s somewhat disappointing that Graham and Ryan are largely reduced to giving us gags about James Bond weapons and Yaz is the designated driver and sensible adult but with less to do.

All in all, it’s all perhaps more of a showpiece, a statement of intent by which Chibnall is addressing the complaints over the last run.So far, the ambition of Series 12 is undeniable, a case of going big and going home.  After the avalanche of activity in the episode, the unexpected climactic shot of a ‘nuked’ Gallifrey is certainly a very big card to play, a 180-degree turn from last season’s fairweather romps, but the Doctor ‘accesses’ the bubble-universe in which it is hidden away with nary a wobble and another iconic moment becomes an epilogue in an episode that already feels like Top-Trumps. When combined with Master mutterings about their Gallifreyan history being a lie and a deception, one wonders if Chibnall might be going nuclear himself, wiping out a lot of established history that has been built up over six decades. The franchise has inevitable contradictions over such a long lives-span, but each Doctor Who showrunner is a custodian of the franchise and there’s a feeling here that Chibnall is deconstructing the myth rather than constructing more layers… which could be a very slippery slope indeed, especially if some rumours about the specifics of that do turn out to be true.

It’s still far too early to judge this season and various elements of brick-bats and bouquets all seem somewhat valid. So far Chibnall seems to be producing a show that feels like having Moffat ambitions but with a Russell T Davies flair, which sounds good on paper but is less easy to produce on screen… but there’s still plenty of time to see where and when things go. 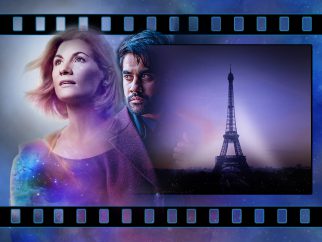