After a controversial start, can Jodie Whittaker master a second season of the cult sf show?

Readying to meet up again and head off on more travels, The Doctor and her companions are all individually summoned to MI5 by ‘C’ (Stephen Fry) to help investigate the bizarre killings of several operatives scattered around the world. In each case, their DNA has been totally scrambled, something far beyond Earth technology.  After getting back together, the team split up again, The Doctor (Jodie Whittaker) and Graham (Bradley Walsh) head to the Australian Outback to find more information from a hermit-like ‘O’ (Sacha Dawan) and Yaz (Mandip Gill) and Ryan (Tosin Cole) go ‘undercover’ to investigate a tech-supremo named Barton (Lenny Henry) who may have links to the killings.

But it’s clear that whatever threat is targeting Earth and now The Doctor and her ‘fam’, its origins lie far beyond the Tardis data-banks and the Doctor’s vast knowledge, maybe even beyond our universe.  And if so, who are the real spies and who is their spy-master?

The last season of Doctor Who saw a fundamental shift in every aspect of its being – that is something of a given. As we’ve noted previously, there was a handbrake turn into a different style: a new show-runner (Chris Chibnall), a new Doctor, a new gender, new companions, new Tardis, a new night of broadcast and what had arguably been an over-intricate, cerebral and lyrical venture suddenly seemed to be aimed at a younger audience. The ratings fluctuated in both directions and – like statistics – could largely be manipulated or read like cosmic tea-leaves pointing to a triumphant return or a problematic misstep depending on how you chose to read them.  That some would feel frustrated was a given – this was the biggest shake-up in the show since its 2005 return to screens. That some would decide the show was no longer for them was always likely, but while some fans departed (or, more accurately, sharpened their pens and keyboards and took to the ‘Net to vent) the viewing figures suggested that some came to replace them and keep the ratings buoyant.  In many ways, it was just another turn around the axis of Doctor Who‘s long history of consitent reinvention.

Cosmic mileage will always vary. Some complaints seemed entirely justified, be they subjective or not. But the sheer joy in which some quarters rummaged through the season entrails and ripped apart sinew and bone of a proclaimed corpse was different and somewhat disappointing, even going beyond stylistic snark to something far more unpleasant.  (New Doctors have always felt the innate grumblings of fandom – it’s something of a rite of passage for each incarnation to face the wrath of the ‘Not as good as the last guy!‘ from fans – but while it’s hard to imagine Eccleston, Tennant, Smith or Capaldi being called ‘bastards’ merely because people didn’t like them initially, you didn’t have to look too far to see Whittaker being referred to as a ‘bitch’ for not being what they hoped).

And so, after taking most of 2019 out of rotation, the show now arrives for its twelfth modern run on New Year’s Day 2020 with fans old and new scrutinising its return… and the only thing that is undeniably true is that this second season of the Whittaker/Chibnall era may establish in a far firmer way the future direction of the series: an entirely new species or just a chameleon circuit redux…

The first part of Spyfall (the second part will follow this coming Sunday, with the show in that regular slot)  indicates that the speedy brevity of plot is something that might continue: What we have is largely a pastiche of 007 movies – exotic locations ranging from Russia, exotic European vineyards and the barren Australian outback through to London and Sheffield – all being represented well within the confines of a BBC budget. Everyone speeds along having a great deal of fun with witty banter being shouted across rooms and hallways and a fair amount of technobabble and anecdotes thrown into the wind. But it’s the momentum of the piece that goes someway into covering for the fact that the many, many parts hide a considerable lack of connective tissue and logic.  While Steven Moffat’s era often got bogged down in surreal and the stylistic and a tapestry of loose-ends making one’s head hurt, the Chibnall era foregoes such details and generally hits the accelerator urging you to feel the wind in your hair rather than examine the machinery involved. It’s all a ride and it’s not until the ride winds down that you realise you haven’t actually travelled any great distance.

But that’s an observation rather than wholesale criticism – in catering for that younger audience (and likely a BBC directive to be less confusing) Chibnall knows what he’ doing (whether some fans like it or not is another matter) and his era wants that ‘romp and caper’ factor painted in entertaining broad-strokes.

Much of Spyfall (dedicated to the memory of beloved writer Terrance Dicks) is disposable silliness, fun in the moment and nicely-shot in an opportunistic, National Geographic way, but the action sequences (including a bike/car chase through a vineyard and a runway sprint to catch a plane) show their seams and are largely unconvincing. The main cast are reintroduced to newer audiences one by one, but guest-star Stephen Fry is little more than an extended cameo (of him essentially being Stephen Fry) and while Lenny Henry has better luck, he’s still something of a casual tech-supremo archetype.   Sacha Dawan plays ‘O’, an apparent MI5 outcast to the Outback that the Doctor conveniently heads towards to get some answers and inside-knowledge of the spy world (especially after Fry’s ‘C’ bluntly tells her that he left all that ‘alien nonsense’ to the now-disbanded UNIT and Torchwood). Dawan’s character seems to be quite knowledgeable about the Doctor’s past, sometimes contradictory, adventures and has plenty of files on the time-traveller.  (With some synchronicity, Dawan also appeared as Waris Hussein, who directed  Doctor Who ‘s first episode An Unearthly Child (1963)  in the 2016 dramatised tale of the show’s beginnings An Adventure in Space and Time). The interesting, if totally ‘WTF’ climax of the first episode, suggests that the actor may have more to do in the second-part of the story.

Despite characters conveniently appearing and disappearing with little explanation to their movements, at service to plot needs (tissue compression vs logic redactions) there are story elements in here that could prove a more satisfying arc. Multiple universes and old secrets get discussed like Chekov’s gun so may come into play again later and there are hints at tonal additions in the weeks to come, perhaps echoing the idea that new Whos often need time to settle in and find their own pace and strengths. Yes, there’s enough here to keep most watching for the full ten episodes if not quite as deeply invested as in years gone by, the previous Saturday-night-staple having become a Saturday-Morning-Serial and with more in common with Russell T. Davies’ era than Steve Moffat’s.

Only after that might we be able to judge the true where, when and what of how Who abides… 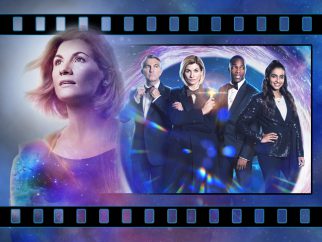