Those supporting players come together for an ill-fated Imperial assault...

When the Mandalorian receives a message from Greef Karga promising a clean slate and reinstatement in the Guild if he helps rid the command post of its limited Imperial presence, the warrior immediately suspects it’s an obvious trap. But the idea of avoiding an endless chain of people trying to hunt him down is a compelling one and so it’s time to get an insurance policy. He enlists Cara Dune and Kuiil as back-up to keep him and ‘The Child’ safe in case of any double-crosses and reluctantly accepts that the reprogrammed bounty droid IG-11 should also be involved.

It’s time for some difficult choices and overdue future plans to be finalised. But even with several alternative strategies in motion, can the warriors fulfil their latest mission or will the odds prove too strong for them to survive?

If we’re grading on a curve, then one could do worse than reckon that The Mandalorian‘s seventh episode The Reckoning is a quite obvious upswing in proceedings – the best of the episodes to date and the first real evidence of any cohesive plan after almost an entire run of sometimes forgettable standalone hours.  Taking elements from many of the previous six weeks, Jon Favreau and his team remember supporting characters and set them on a convergence course that screams ‘trap’ from the very moment it’s announced. So the real surprise is not so much the agendas at play but the sense of when will things go wrong and how will they resolved.  It isn’t a real spoiler to say that such a resolution is not immediate and we’re left on a cliffhanger until the next entry ( after this rare Wednesday-outing the final episode of the run won’t be until Friday 27th December). However that cliffhanger is somewhat unexpected in the grand scheme of things, so it will be interesting on its repercussions…

The SFX factor continues to be of the high Lucasfilm standard and action-wise there’s plenty to go around: there’s an interesting if brief  desert-night firefight interlude with some winged beasties that screams of Pitch Black and makes Games of Thrones conflicts seem well-lit by comparison.

Pedro Pascal’s Mando is still an enigma wrapped in tin-plating, but supporting cast-wise, we’re not shirking on quality. Giancarlo Esposito (Breaking Bad) was born to play arrogant and self-assured bad guys and from the minute he appears he instantly raises the boo-hiss stakes once again. It might help that he has an army of stormtroopers at his back, but our introduction to Moff Gideon has the air of someone who might not need them and that makes him inherently dangerous and an effective threat to our heroes. He’s the guy one suspects won’t be killed off immediately because he’ll be a hard act to follow – and the show desperately needs that cohesive threat.

Gina Carano’s  Cara Dune returns, once again being given a hand-to-hand combat sequence to remind us of the actor’s specialities…  but it’s effective enough and the shackled-to-each-other -via-a-lazer-chain combatants makes for some interesting choreography. Carl Weathers as Greef Karga  is also back, having survived the last encounter with ‘Mando’ and enticing his previous employee back with an unlikely, unreliable promise. Nick Nolte reprises the voice of Kuiil and Werner Hertzog relishes the chance to reprise his sneering upper middle-management warlord, known only as ‘The Client’, to strong effect.  Mini-Yoda has a slightly larger role to play than in the ornamental plushie role of the last few weeks and it’s refreshing that someone actually calls out The Mandalorian to explain what his plans are regarding the little green force-magnet.

It’s still all very familiar and an echo of countless less-well-budgeted episodes from decades worth of sf tv shows, but executed well. Is this and the upcoming finale enough to redeem a somewhat lacklustre debut? Time and hindsight will tell, but for such a short season, the batting average has not been as favourable as one would expect and demand from the ingredients – it’s never being awful but certainly its been derivative and ill-paced and one suspects a show not linked directly to the greatest sci-fi franchise of all time (patent pending) might have failed to secure itself a guaranteed future beyond this 2019 run.

Unless that year-end finale really pulls off something special, this will have all been a pleasant diversion rather than an imperative. 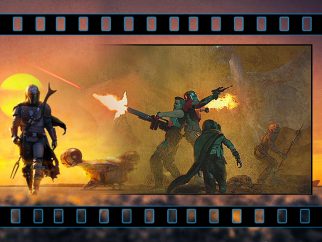