A catch-up with the most recent entry for Disney+'s Star Wars show...

After a close encounter with a pursuing ship, The Mandalorian needs to put in repairs and so heads to Mos Eisley, the infamous space-port in the backwater (backsand?) world of Tatooine. But needing money to finance those repairs, he reluctantly agrees to help track a local would-be bounty-hunter for a prominent capture of a ‘terrorist fighter’.

By this halfway-ish point in the run, I think we’ve established that The Mandalorian is a bog-standard sci-fi series, leaning heavily on any trope that will take its imperial-credits, but with the added flourish of being part of the Star Wars universe whicha rguablt makes the difference – though your light-years may vary on how much. If you were expecting anything ground-breaking, you’ve likely been sorely-disappointed, but  if you’re looking for a high-production value annex to that galaxy, far, far away you’ve probably thrilled at the easter-eggs, references and just the sheer veneer of what’s on offer.

The galaxy may be vast but the fifth episode, entitled ‘The Gunslinger‘ conveniently takes us back to Tatooine and, even better, to that hive of wretched scum and villainy known as Mos Eisley. In a series of shots that unapologetically reference the original film – the planet from above, the entrance to the enclave, what looks to be the same bar that Obi-Wan, Luke and the droids enter in search of passage off-world – things get even more reverential when we find the guest of the week, a would-be Guild member Toro Calican (Jake Cannavale) sprawled in the same booth as we remember first meeting a certain Correlian pilot of the Millennium Falcon. But Toro, we discover,  is very much a bargain-bin version of Han Solo, with all the confidence, but half the skill and a quarter the charisma. He needs a big ‘win’ to get union-affiliated and The Mandalorian needs some money for repairs after a top-of-the-hour space-battle.  It’s a partnership of inconvenience, but the two bounty-hunters set out in search of Fennec Shand (Ming-Na Wen), a highly-skilled warrior believed to be hiding out somewhere deep inside Tusken Raider territory.

Ming-Na Wen, one of the original lynchpins of Agents of SHIELD, does everything required of her in what is another under-written role that is fuelled by impressive fight choreography and snark (both familiar characteristics of her Melinda May role for Marvel). It feels like a potentially good role, one that if written better and given more room to breathe could have been an impressive addition to proceedings.  But a few moments of hand-to-hand combat and some ill-fated banter are essentially all we get, in reality, little more than an extended cameo that probably took a single day to shoot.

The Mandalorian – now casually referred to as ‘Mando’ by everyone he meets – keeps goes through the motions, but there’s little to change the opinion that while Pedro gives the tilts of the head and nuances to the voice-performance that add something, there’s really little that would be lost if the titular role was suddenly swapped out to be played by another. (In fact, it’s been noted that for a large amount of scenes, it may not even be Pascal in the armour, making this more a case of voice-work). Mini-Yoda/Toy-Yoda/Baby Yoda (at this point, it’s up to you), continues to be the undeniably cute prop of proceedings, there for moments of levity, the ‘awwwww!’ to balance the ‘argggh!!!’ and you can already pre-order that inevitable plushie.

The Mandalorian has found its niche as a glossy homage, merchandise-pushing venture that looks nice but still rings empty… comfortable, but  a little too comfortable there. 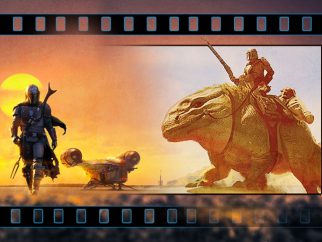