Short Treks: ‘Ask Not…’ as Pike swaps Bridge for Brig…

Ahead of 'Picard' and more 'Discovery', the 'Short Treks' continue to offer bite-size entries into that universe...

When the Enterprise and Starbase 28 come under a surprise attack from what appears to be the Tholians, a young cadet Thira Sidhu (Amrit Kauer) on assignment to the brig finds a high-profile prisoner placed under her watch. Apparently Captain Christopher Pike (Anson Mount) has defied official orders and technically mutinied in an effort to save lives. While explosions rock the structure, Thira is given strict  instructions to keep Pike under careful guard. But Pike quickly tries to convince the young officer to see the imminent danger and free him so he can save them all.

However, Thira is well aware of the Star Fleet protocols and refuses to go along with Pike. As the time ticks away, who will win the battle of wills and what will be the consequence if the cadet makes the wrong choice?

The most recent slots for the Short Treks, available on CBS All Access and each offering  a quick slice of series-adjacent Trek action, have been quite brief, all of them seemingly running distinctly shorter than last year’s 15-20 minute entries. And while – so far – there’s not quite the memorability of last year’s stellar, emotional offerings, they’ve still proven the ability to take a concept, distill it down to the basics and present a short, sharp hit to the eye and mind.

The first of the new run was Q&A, a whimsical interlude about Spock’s first day on the Enterprise and so far the longest of the current batch. This month’s Ask Not, a little like the second minisode, The Trouble with Edward, is fun but could have seen the benefit for more time to set out its central premise.  The audience is likely to be one step ahead of the story from the outset and with only a handful of minutes to play with, that’s something of a shame.  In this case, a story that runs to less than ten minutes simply doesn’t really allow for the complex power-plays that could have made the conflict between young cadet guard and seasoned superior prisoner a more elaborate and more compelling outing.  That being said, Anson Mount adds several more cans of fuel to the fire of those demanding he gets to reprise Pike in a full-on series of his own – every minute of screen-time he adds to his resume makes those arguments more compelling. Here he is brisk and to the point, firmly at ease in the role he’s defined and trying to find ways to crack the cadet’s resolve and using a range of empathy, command, logic and sincerity to find a way out of the handcuffs and brig into which he’s been dumped. Amrit Kauer (best known for Anarkali) as Thira, a cadet facing a possibly career-ending decision, is effective in the time she’s given but it would have been nice to see a format that had her wavering for longer and playing up the nuances without the ticking clock foreshortening the conclusion.

The punchline over the conflict resolution is hardly unexpected, but this is still a prime example of what the Short Treks were essentially designed to be – tasty appetisers and aperitifs between the fuller spreads. Writer Kalinda Vazquez gives a brisk and effective story and director Sanji Senaka, better known for his music videos for the likes of Jennifer Lopez, Ashanti and Common, produces a less physically kinetic experience than one might have expected from his résumé but still one that plays well in what is a claustrophobic and almost single-set production.

There’s still very little of the future-heading ‘Discovery’ aspect of Trek on show and the continuing feeling that this could rather be that dry-run for a Pike/Enterprise show. At the end there’s a tantalising glimpse of the next two Short Treks, both released in December and for the first time they are animated – in two very different styles – but both teasing to take us somewhere we’ve never gone before…or, at least, recently. 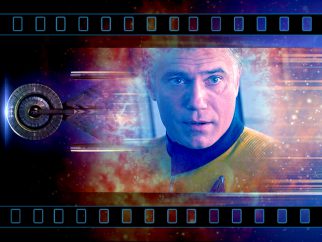