Ambitious, slow-burn 'For all Mankind' takes the space-race in a new direction...

It’s the summer of ’69 and all across America, families gather to watch a truly historic event – the first man to step foot on the Moon. After some tense last-minute problems, the vessel lands and the first astronaut steps on to the distant, powdery surface, uttering the first words ever spoken there:

“I take this step for my people, my country…and the Marxist-Leninist way of life.”

No: this is not the 1969 you know – it’s one where the Russians managed to get to the moon first and it has major implications for everything that follows. Will America’s NASA step up to the plate, indulging in ever more more risks to regain their toe-hold in the space-race or are they, as astronaut Ed Baldwin (Joel Kinnaman) tells a reporter in an off-hand moment ‘running scared’ in the wake of recent defeats.

Either way, the decisions that follow may be life or death for not just the individuals who ride the rockets but for the people who care for them, the people who work beside them and for those who will come after them…

There’s always something enticing about alt-history stories, the idea of what would and could have happened if one little detail or decision had been different – how subsequent key moments could easily have played out differently and like a ripple, changing more as they expand. So when you take something as seminal as the moon-landing it’s easy to understand how history would have been fundamentally different in America was beaten to the moon.

Ronald D. Moore has a formidable history in the fantasy genre, several incarnations of Star Trek, the hugely successful reboot of Battlestar Galactica and the time-displaced Outlander but this feels like something entirely different. There are no aliens here, no transporter beams or cosmic rays, just some hard truths and some fascinating insights on what it took to be part of the space program, the sacrifices made and how often the gap between spectacular failure and historical luck was thin and fickle. There doesn’t need to be an explanation of the events being different – no time-travelling or Avengers-shennanigans here… it’s just one gigantic ‘What If..?‘ that you have to accept on merit. If there was an episode-ending punchline, this could be a Twilight Zone, but it’s all more matter-of-fact with plenty of walk-and-talk to pass the time. The result is more like Aaron Sorkin doing a tech-fringed Mad Men than Stephen King or Rod Serling waiting for the other shoe to drop.

The opening episode moves slowly and if it wasn’t for the changes of outcome along the way it would feel every inch like the kind of the decent but dry, dramatised account you might find on NatGeo or the History Channel. But those differences do keep you on your toes and every so often the conversation and furrowed brows are punctuated by the realisation that you aren’t sure where it’s all going. As much as the world sat on their edge of their collective seats in the 1969 our world, unsure if it would be triumph or tragedy, we’ve grown accustomed over the decades that followed to knowing how well it all went – safe in our distance from events and our trust of history. Here… not so much and For All Mankind toys with our knowledge and expectations in admirable style, showing the mundane in a new light and putting us firmly back on the frontline of discovery.

That’s a rich seam but one that the series feels no rush to excavate and that may be the show’s main problem… the speed at which it peels this alternative history is so laid back and so mundane in many ways that the moments of tense drama that do come almost feel like a release. And if it’s tempting to think the first few episodes are simply laying the groundwork, the series doesn’t really pick the escape velocity it’ll need if it wants to hold onto its audience, even beyond those chapters.  It’s interesting, but not quite compelling and though it’s fascinating to see some of the nuances that change not just the program but society in general (for instance women becoming involved much earlier in NASA’s work), there are times when you want to actively get out and push the support gantries away in favour of real lift-off.

Once the US is beaten to the moon, all bets are off, a NASA that had grown cautious, even timid in the wake of disasters like the fatal Apollo 1 fire in early 1967 and intelligence failures (that suggested the Russians were trailing far behind), teeters on a decision to become reinvigorated and chance-taking or to admit defeat and channel government money elsewhere. Each carries risk, not just for those venturing into space but for national pride and power-structures. As the mission commander extols from the control booth: failure isn’t an option.

It’s at this point that Moore’s venture could have veered into simple patriotic flag-waving: the idea that the US was cheated of its milestone and was always destined to be ‘best‘… supplanted only by the bigger message of the other classic American mantra of being the underdog that rises to the challenge when all seems lost. Instead, Moore threads the needle, exploring how failure does inspire as much as triumph but not forgetting that the men – and women – involved are prone to be torn between insecurity and better angels. This is a show about consequences, large and small, good and bad and the balance therein.

Joel Kinnaman’s Ed Baldwin ( a fictional character in an ensemble of  actual historical figures) is a fascinating study in contradiction, a man who was a handful of miles from the moon on a test-flight and whose public declaration that NASA has lost its nerve has consequences for his career and the whole space program. He’s a product of his time, able to talk to his military buddies about his frustrations more easily than he can with his wife and child, but also able to swallow his pride for the good of the mission. Shantel VanSanten as his wife Karen is also impressive, resisting the call to fall completely in line behind Marge Slayton (Rebecca Wisocky), the NASA matriachal wife of boss Deke ( Chris Bauer) but torn between wholesale support for Ed, knowing that his wish to go to the lunar surface runs the risk of losing his life. But the show also goes off on tangents that aren’t entirely clear at the beginning, one in particular following a young Mexican girl, Alieda (Olivia Trujillo) who watches the Russians land just a few weeks before she illegally sneaks across the border into America – perhaps hinting that her future may end up in a higher orbit.

This is a show that will likely attract and keep older viewers and those familiar with the likes of Apollo 13  rather than those who demand a spectacular wham-bam-quickfire approach to their drama, but short of some major revelation by the ten-episode series end, it may find its meandering approach leads to a decay in orbit, gliding slowly along as it observes the Earth below when it should have more moments to soar – and do more than gaze to the stars it so yearns to touch…

For All Mankind is certainly quality television, but – ironically – may not be for all audiences. 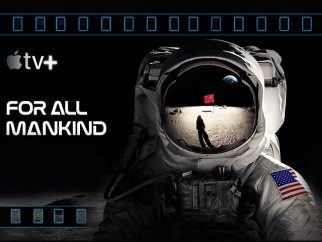