Can a cloned Fresh Prince survive the uncanny valley in a SFX-enhanced but formula action thriller...?

Henry Brogan (Will Smith) is one of the government’s top assassins, regularly bringing down bad guys when deniability is needed. He’s a principled guy, but has served his government faithfully. When he announces his retirement after a particularly tricky kill that nearly had collateral damage, all he wants to do is fade into obscurity. But when his CIA friend Jack (Douglas Hodge) tells him that the latest hit might not have been the ‘enemy of the state’ Brogan was led to believe – and that other jobs might have been equally iffy – Brogan realises his own life may now be in danger.

That seems to be true when a contract is taken out on Brogan and he’s soon on the run with compromised undercover agent  Danny Zakarweski (Mary Elizabeth Winstead) and seeking out fellow soldier and erstwhile pilot Baron (Benedict Wong) for assistance. But the powers that be quickly realise that it might require an operative of the same incredible talents to bring Brogan down… and it’s the perfect opportunity for former friend and soldier Clay Verris (Clive Owen) to fully test out his secret side-program. It’s an operation known as Gemini… and as Brogan is about to find out, the only person better than he is now, is a version of him when he was younger.

Who will prove the better man when they’re actually the same man?

Gemini Man is a film literaly decades in the making and one which has passed through many hands on its way to the screen. (Director Joe Carnahan was once connected to the project recently showed off the ‘sizzle reel’ in which he’d pitched his version of the concept, inter-cutting scenes from various Clint Eastwood films to show how, even without real effects, the basic idea could work.) But the visual-effects that would be needed to fully render the experience were never really available, technology needing to reach a certain level before you could actively put two different versions of the same actor  – at different ages – together in scenes without the seams showing.

The problem is that the seams, on a variety of levels, still show.

Smith, of course, is no stranger to big tentpole movies with impressive SFX budgets – he’s headlined Independence Day, Men in Black, I-Robot, but even with those, Gemini Man is something a bit more ambitious – the kind of movie that almost asks you to ignore those sleights of hand and rise above the tricks to simply believe what you’re seeing. The de-aging techniques used to simulate Smith Jnr. have been glimpsed in the likes of  flashbacks sequences for Guardians of the Galaxy Vol. 2 and X-Men movies, but has never really been at the forefront throughout an entire feature to this level. Though it’s a fun enough diversion, the ‘uncanny valley’ (the ephemeral barrier to believing the humanity of an artificial creation) is still evident in Gemini Man and while some scenes get close to being almost fully immersive, a majority of the scenes featuring ‘Smith squared’ still have that ‘something just a little off‘ aspect which essentially defeats the whole purpose.

The dual roles for Smith are the unapologetic hook to a feature that shows its age in other ways – the basic plot being something you might have expected from Stallone, Schwarzenegger or a wave of action stars during the late 90s / early Noughties. (Indeed, The Sixth Day trod adjacent ground nearly two decades ago in 2000 – though with less tech – and this feels like that film was welded to Assassins  or Ecks Vs Sever and just let loose). Beyond the central premise, there’s the same sloppy lack of logic and tilt towards set-pieces as many other films of that decade. Far too often characters make choices that lead to great stunts, but make no real sense if you stop to think about them and certain plot contrivances require a suspension of disbelief that runs the risk of rearing their head while you’re watching rather than afterwards (For example, Brogan has an innate fear of drowning, yet has no problem with boats; he has a severe allergy to bees, but doesn’t carry an epi-pen and why doesn’t bad man Clay get rid of that bee-weakness if he has the tech to clone people – achieved when other scientists were still struggling with doing the same to sheep?). Add to that a raft of thankless and under-used supporting characters who are there more for  ‘exposition’ than anything essential and this feels like an expensive but ultimately undemanding ‘beer-and-pizza flick’ than a genuinely inspired blockbuster.

Mary Elizabeth Winstead is given more to do than expected and makes the most of it,  Benedict Wong is just a collection of clashing character-traits, but has fun as the ever-prepared army buddy. But Clive Owen is essentially there for the pay-cheque alone: the only thing missing from Owen’s one-note, bad-guy performance is a moustache to twirl. The cookie-cutter antagonist is the sort where we’re simultaneously asked to believe he’s a majorly connected security-service boss, a rogue agent,  caring father, uncaring military hawk and somehow has the ability in middle-age to easily take down young Smith in his prime. Nope, not buying it.

One would also expect something more significant than this journey-man effort from the talented diretor Ang Lee, better known for far superior films such as The Life of Pi, Crouching Tiger – Hidden Dragon, Sense and Sensibility and Brokeback Mountain. Here he seems to be going through the motions and despite a breathless, high-speed-frame-rate bike chase through crowded streets… with the amount of CGI needed, one suspects he’s working at the needs of the SFX department rather than the other way around – which is rarely a good thing.

Those looking for a light diversion and a slice of silly action hokum will find Gemini Man sufficiently fun to watch and almost any Will Smith film has something going for it. But at the end of the day, multiple Smiths only give this outing breadth… it’s the depth that’s missing. 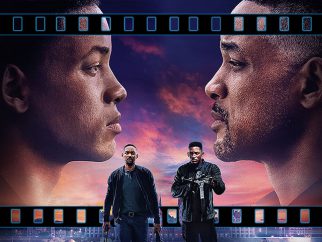