Pennyworth: No bats – but bloodied, bespoke and very British…

UPDATED: With the first series done in the US, did 'Pennyworth' live up to its quintessentially British promise..?

Alfred Pennyworth has served his country and now intends to serve himself. Trying to escape the bad memories of the things he did on a far off battlefield, Alfred is still young enough to carve his own future on his own terms and he wants to set up a security firm. But England may be just as dangerous a place to be and through a series of chance encounters, he finds himself caught in the middle of groups whose names are spoken off in whispers – and who have very different ideas for the future of post-war Britain. Both are more than happy to remove anyone who stands in their way.

There’s the Raven Society with its talons in compromised high society but with a remit to bring the fascists back to power, the No-Names who would like to steer the country into the extremes of the opposite cause. In truth, Alfred would prefer they both  stick to their own turf and duplicitous spy-craft and just leave him alone… and that goes for the other miscreants that just make his life difficult. But an easy life seems unlikely… because sinister plans are in the works and one way or another they extend into all parts of Alfred’s life  and if he wants to hold on to his girlfriend Esme, he’s going to need an income to keep them safe.

Alfred has a particular set of skills to offer and a code of conduct that others will seek to both exploit and circumvent.  He intends to not only survive but thrive… but at what  cost to queen, country and those he cares about?

“Technically, it would be a coup d’état, what do you think about that?”
“As a rule, if you have to use French words for something, I don’t like it…”

There’s much to like about Pennyworth, a show that certainly carved an unexpectedly unique niche during its first ten-episode run. – It achieved the rare result of  blending numerous ideas and motifs and spinning an interesting, if not always paltable whole – and all with only the slightest and most obscure nods to the DC/Batman material we know lurks somewhere way beyond the horizon. Indeed, far from being treated as the obscure spin-off many envisaged, its arguable that it did itself a service by being a show that was so far removed from that in style and execution that you’d barely be aware of any connection without being told.

Danny Cannon and Bruno Heller were the main team responsible for another Batman-adjacent enterprise, Gotham, and while that was interesting in concept, it quickly became ‘Before Batman‘ simply showing prototypes of the classic villains to come. Though the creators have said both shows could be genetically connected,  Pennyworth feels like another universe – far more ambitious, far less shackled to the genre and with a surreal edge that feels unlike anything else on television at the moment… though it’s possible that the middle-aged Alfred we see in Gotham (essayed by Sean Pertwee) could once have been Jack Bannon’s younger west-end wide boy, it’s  more a celebration of another culture entirely.

There is something wspecifically British about the whole enterprise. Most US shows, working without a decent travel budget, are content to slap a red phone box and a black taxi into the background and call it ‘on location’, but there’s no doubt that this is a series actually shot – at least part – on real British streets (albeit with some suspension-of-disbelief, far-horizon SFX backdrops that perhaps echo – or is that foreshadow – the way that Gotham City was often shown as a mixture of a modern metropolis with a gothic twist). Batman, Bruce Wayne and Gotham are quintessential American icons, but Alfred is decades and continents removed, as British as stiff upper lips and the Beatles. Based at Leavesden Studios as well as getting out and about in side-glancing rural and urban locations, Pennyworth created its own particular world within that and one not scared to shy away from the less positive touchstones. The result has a signature visual style and pentameter that speaks to an askew version of 1960s Britain, one that is a delightful, if darker, cross between the Avengers (John Steed and Emma Peel, not the Tony Stark and Natasha Romanoff variety) a retro-fitted 007, the savagely unforgiving yet outwardly dignified era of The Krays, post-war  paranoia, west end wonder and just plain dirt. There’s even some Wicker Man moments by the end of episode four and a nod to Peter Cushing in the finale.

Shown on Epix in the US (and to be broadcast on the subscription service Starzplay in the UK this Autumn) there’s growing graphic violence as the series progresses and a sprinkling of f-bombs (and worse), indicating from the outset that this wasn’t going to be family-viewing. Indeed, the political hues of the time (post-war fascism and racism still lurking beneath the veneer of a brand new day and political expediency and compromise being the new dark arts) are firmly part of its DNA. There’s actually more of an anarchic Alan Moore social-awareness than you might expect going in – the dystopic vision of V for Vendetta and the tweaked history of Watchmen seemingly having influences. This is not just potentially classy in the quality sense, but is looking at the class-system and a country being torn apart by those who would harness others ideologies for power in opposing directions – and demanding loyalties or retribution. In that sense, despite the deliberately askew-60s production design (with a flexibility that nods to almost Victoriana elements in some cases) it’s sadly as timely as could be.

But perhaps therein lay a problem. As the series moved forward it did seem like Cannon and Heller were sometimes more interested in playing musical chairs with social-political policy than with the title character himself. In the latter half of the run, there were sometimes entire episodes that felt as if Alfred was an outlier to the machinations and  shenanigans of the opposing political forces that moved into the spotlight. Quality backdrops are fascinating decoration that can play into the main action, but when moved too far forward they obscure the main story. When placed in tandem to a  story going out of the way to make audiences begin to question their loyalty to Alfie (he gets over losing Esme far too quickly and there’s absolutely no doubt he makes the choice to be a cold-bloodied murderer many times over) then there’s a danger you’re going to lose the loyalty you’ve built up. The first half of the seaosn had heart and whimsy to match its darkness, the latter – merely oveblown character quirks and vitriolic posturing.

However, rising star Jack Bannon owns the lead role and the screen, charismatically swaggering along like a mix of  a slightly lecherous David Tennant in search of a Tardis and a stiff drink and Michael Caine preparing to blow the bloody doors off…  playing wide-boy, ex-soldier Alfred as principled but far from prim. Here’s a young man whose seen far too much killing for his age but who stores his bad dreams away as he looks to the future. Bannon mixes the quip and the kick, able to savagely deliver both wideboy put-downs and non wirework drop-kicks as needed – initially giving us an Alfred not wanting to kill but willing to do it without blinking should the stakes require such. He’s reckless but pragmatic and one of the main keys to the show’s success-stories as a performer.

But there’s able support here too. Singer/Actress Paloma Faith is quite glorious as a scene-chewing henchwoman named Bet Sykes (geddit?) exuding some genuine casual menace like a Corrie reject on crack – only occasionally tipping her threats into over-the-top theatrics and becoming more complex and crazy with every episode – though there’s a feeling that once established there’s only so many ways to take her before it gets repetitive. Emma Corrin as Esme, the high-society girl who falls for Alfred – despite their differences – made us root for their romance and seemed to benefit from being given far more to do than being ‘the love interest’. Emma Paetz as Martha Kane is another savvy addition to the cast and Jason Flemyng, more often to be seen in Guy Ritchie fare, moves up and down in the world as the nosey Lord Harwood, determined to stage a coup d’état for the fascists and he too manages to make himself a villain of the boo-hiss variety but one capable of backing up his demands in bloody style.

Pennyworth, the character and the show, has the confidence to be its own man – borrowing some ideas but shuffling the deck to ensure a winning hand and never trying to emulate.  It does lose its stride towards the end, seemingly sidelining Thomas Wayne and Martha Kane with a time-wasting satanic-tinged story that evaporates,  dances around the battle for the country’s hearts and minds with a national emergency that’s too easily stepped back from and its version of a young Queen Elizabeth II is silly caricature rather than satire. It ends up revelling a little too much in its violence and cynicism and that’s a shame for a show that arguably went from quality confidence to over-confidence in its narrative . But even with those caveats, it’s a mixture of British style, American money and a series that could be on its way to being one of the true genuine, impressive surprises of the year despite some failings along the way. The Epix/Starzplay factor – rather than a more well-known platform – may  mean fewer people got to see Pennyworth than should (that being said, it’s gaining ground with notable, quality fare such as Berlin Station, Perpetual Grace, Deep State and Godfather of Harlem on the Epix schedule) but if the ten episode first season does get the exposure it deserves – the butler has served us well enough to want to see the next serving…

Pennyworth was broadcast in the US on Epix and arrives in the UK in October on StarzPlay. 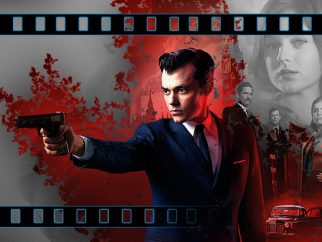