GOT: Apocalypse Wow. For whom doth ‘The Bells’ toll..?

The pacing may be questionable, but the spectacle is not... 'Game of Thrones' unleashes penultimate carnage...

With the forces of the Night King defeated, the troops have headed south to begin to rally for their attack on Cersei’s forces in Kings Landing. However, Cersei (Lena Headey) has made it clear that she intends to give no ground and believes her stronghold will hold out once more.

But Daenerys (Emilia Clarke), ever more isolated and distrusting of those around her, is equally unbending. She speaks of ending the age of tyrants forever, but with so few wise advisors left, she begins to see failure and betrayal from even those who love her. The only one she can trust is her dragon – a beast capable of huge carnage.

As people on both sides assess their past mistakes and current priorities, Tyrion (Peter Dinklage) desperately seeks a way to keep faith with his queen but to also stop the slaughter that may happen if the two forces clash in the city’s streets. Can his last minute attempt to prevent imminent tragedy really work and if it doesn’t, can Westeros ever be the same again?

There will be those who will watch Game of Thrones and speak of their dismay that while a strong male lead character seems to endure with morals largely intact and forgiven any transgressions, a strong female character has once again been demonised and can’t avoid the devolution from ‘independent woman’ to ‘hard-ass-evil-bitch’ motif. But to do so really requires that you haven’t really watched Game of Thrones – a show that has given us a saga with events and its menfolk continuously steered by far more pro-active and resilient  ‘taking-no-shit-from-anyone’ women.  From the start Daenerys  (Emilia Clarke) quickly went from abused victim to a person who did what she needed when she needed to achieve what she wanted, often without batting an eyelid – only submitting to others as a means to her own ends. For a long time she has been a ruthless queen in attitude and action and  in all but official standing and her growing arrogant nature (hardly a gender-unique attitude in the show) and sometimes unmerciful decisions (ditto) can hardly be called an entirely new trait. But now it’s just entered an entirely new league.

No, if there’s a problem – and there arguably is –  it’s not the journey that’s perhaps at fault here (though we all hoped GoT would somehow spare ‘Dany’ that foretold fate). Yes, she has definite form for punishing her enemies even after she beats them (actual crucifixions as a warning, anyone?)  but it’s the recent pacing of that rationale decline – or ramping up, if you prefer. What might have worked far better over a fuller season, or ten or more episodes of a final run, rather than the six albeit longer entries we now have, works less well as Dany’s losses (particularly the recent deaths of so many advisers and slightly kinder angels) mount up and suddenly make her, her own, isolated and worst counsel.  The moment she decides not to accept Kings Landing’s hard-won surrender but to go full Apocalypse Now on the city anyway is her definitive turn to the Dark Side… the kind of decision for which all the best sagas demand retribution and consequence. But however inevitable that may be to the titular ‘Game of Thrones’ itself, its execution in the moment doesn’t feel quite as… organic as it should. Given her mindset, unbalanced though it now is, the citizens of the city could – dramatically – have been forgivable collateral damage on her route to Cersei – the ‘ends justify the means’ of Dany’s revenge (at least in her eyes). But instead of seeing that destruction as a ‘necessary’ acceptable by-product, she and  her winged steed Drogon actively seem to target the busy, panic-stricken streets with no military value or moral imperative. In the same breath as declaring her aim is a world devoid of tyrants, she’s unapologetically turns the city folk into firery-breathed crispitos. By the time she’s done, not only would the Iron Throne she seeks be possibly destroyed, there’d be no-one left to rule. That’s not singular revenge, it’s wholesale slaughter. It’s the moment you know that Dany won’t, can’t and frankly shouldn’t survive the coming final episode.

Once the pre-assault preamble is done, the episode speeds along in entertaining fashion – from air-punching moments (Yay… enemy-destroying dragon carnage!) to heartbreaking losses (er…. boo… indiscriminate dragon carnage!).  Actually, general pacing continues to be the problem – the once vast and barely-navigable country now reduced to easily-traversed landmarks that feel like the highlights of a ‘Visitors’ Guide to Westeros‘ and what was once an intricately-planned story of deception and deceit has rapidly shed such nuances as true-colours are revealed (and then, often, splattered with blood and entrails).  Particularly sad is the dispatching of notable players Cersei, Varys and Jamie, not their deaths per se – casualties are inevitable at this point – but the actual manner in which they leave. Rushed. Exit Stage Left. That altered momentum has been a trait of the show since it out-paced the more considered source-material, though George R R Martin perhaps deserves his share of the blame for that, moving on to other lucrative projects before finishing the work he’d started.

Narratively, this is an episode of great, truly epic scenes and developments rather being a wholly satisfying great chapter per se. One suspected that Cersei (looking remarkably trim for a woman who claims she has been pregnant for two seasons) had some monstrous, malevolent plan to face down Dany and Jon’s forces, but – disappointingly, she’s just arrogant and over-confident, reduced mainly to watching the chaos from her ivory tower and living her final minutes in denial –  a frankly, pathetic and unworthy version of her previously high-manipulative self. (If viewers want to complain about women getting the shorter-shrift, Cersei’s the main victim of that). The series desperately needed a definitive Daenerys Vs. Cersei face-to-face moment and everything pointed to the two women’s no-quarter-given confrontation.. but it never came – their personal battle fought inpersonally from afar. Consequently, Cersei and brother/lover Jamie are largely reduced to the side-show as their city burns asunder until Kings Landing lands firmly on them… and buries them in anonymous, arbitrary fashion. Even as incestuous, child-killing, mass-murdering and possible sociopaths, they deserved better.

Once deployed, Danerys is largely a distant ‘angel of death’, her wrath perceived from below. We see it through varied eyes: Kit Harington’s Jon Snow finally realising others were right to have doubts about the woman he loves, Maisie Williams’ Arya – witnessing the devastation at street level with hollow eyes, Peter Dinklage’s distraught Tyrion proving to be one the key players here: a short man of great stature, wine and wisdom who so nearly secures the peace he knows is possible and has to watch it trampled underfoot by agendas larger than his own. One of the most satisfying moments on a variety of levels is brothers Ser Gregor Clegane (akaThe Mountain) played by Hafþór Júlíus Björnsson and Rory McCann’s redeemed Sandor Clegane (The Hound) having an epic battle on the battlements… one that has all the energy and choreography needed to ranks it alongside certain Star Wars and Highlander moments. It’s a predictable conflict and eventual resolution that’s been a while in the making, but delivers all it needs.

Yes, the visuals here aretruly epic – many sequences a benchmark for just how far television has come – with scenes that a few years ago might well have looked no less impressive on the big screen. The sfx budget, clearly saved for this episode even when compared to the Battle of Winterfell sequences, allows world-building and world-destroying: wholesale carnage that is stunningly believable as Dany and Drogon sweep above Kings Landing (a cityscape where it’s impossible to see where the actual physical buildings end and the pixels begin)  and punish those below. If Winterfell’s fate felt like Braveheart, this latest attack feels more like Saving Private Ryanwith kinetic, unforgiving, up close and personal, debris-dodging camera-work, effective editing and visceral deaths. But, yes, we’re never allowed to forget that we’re watching a slaughter not a battle.

As Arya, who pragmatically and conveniently – if unexpectedly – suddenly gave up on fulfilling her epic kill-list, rides out on a pale horse to confront the destroyer of worlds – biblical, much? – the next episode may decide how we view the saga entire.

Game of Thrones has been ground-breaking and bone-breaking in equal measure – but when the time comes to bow out, will it break our heart as well? 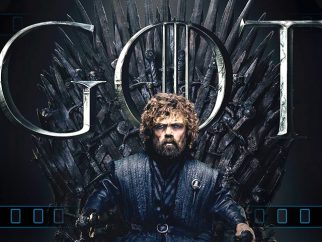