‘Winterfell’ is here. Game of Thrones roars back…

All eyes were on Westeros on Sunday night. Was the very long wait worth it? Of course it was...

So. Winter is no longer coming, it’s finally here and there’s little doubt the most watched hour of television on Sunday night was the opening salvo in the final season of HBO‘s Game of Thrones.

There’s an argument that the much-anticipated return to Westeros could never live up to expectations and though there’s some truth, it lay the groundwork well – ticking off the violence, sex and wry scripting that have become its hallmark. Perhaps the only problem here is for those of us who didn’t spend the last month doing a binge-watch catch-up of what has transpired to date. It’s true that Winterfell did it’s best to reset the tabletop – from tweaking the still amazing animated opening sequence through to a little more exposition than usual, skipping across Westeros and reminding viewers of where some of the key players were last seen.  But if, like many, it’s been well over a year since your last visit to the war-torn lands, then there were probably more than a handful of moments – even after the ‘Previously on….‘ montage, that left you turning to your loved one and whispering ‘Wait, who’s that? Where are they? What happened to..? etc etc…‘ That gap between seasons would probably have crippled any other show on the planet, but a third of the way into Winterfell, you were probably smiling at the Starks’ snarks, Cersei getting serious and counting the moments until Jon Snow weathered the revelation of his true lineage.

There’s sometimes a danger that Game of Thrones relies on a ‘Dynasty with Dragons‘ formula, but the betrayals, shifting alliances and powerplays are delivered with such delicious conviction and slappings of censor-baiting gore that even at the moments where it slips from Shakespearian heights to fantastical guilty pleasure hokum mean that it is still armies ahead of a lot of the competition. Perhaps there were the odd uncanny valley moments where the imposing dragons’ taking flight revealed just a little of the CGI mechanics at work, but it would take eagle-eyed scrutiny to see the joins between on-set architecture and computer-conjured extensions and backdrops. That’s the beauty of Game of Thrones – it’s success in creating the world of George R R Martin in such great detail

Kit Harington as Jon Snow remains the brooding, smouldering ‘trying-to-do-the-right-thing’ hero that has men and women not caring if he ‘knows nothing’ or not, but the show’s talented ensemble share the load admirably. Peter Dinklage’s Tyrion gets some killer one-liners, Sophie Williams gives burning stares that suit a Dark Phoenix and Emilia Clarke radiates confidence as Daenerys  but as a queen who could have better social skills. However its arguably Masie Williams as Arya who probably makes the best use of her lines, knowing when a withering or lingering look is better than a scene full of words, especially as the viewer watches her tick off a mental checklist of those who have wronged her as they pass by entering the gates of her childhood home.

This was a normal length episode – even a little shorter than normal – that could actually have done with a few more minutes  but there’s some epic-length chapters to come between now and the end of May and the weekly waits are going to drag. 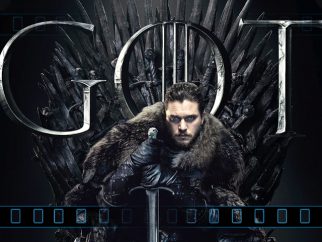 Discovery’s ‘Such Sweet Sorrows’ – Hurry up but Weight…

No ‘Bones’ about it: Connolly’s epic takes its damned tome…