It could have been the calm before the storm, but Trek's latest is at its best with personal moments of quiet power...

One of the red signals has appeared over a distant Klingon moon and while no-one knows what it means, Tyler is all too aware of its personal significance to him – it is the planetoid containing the monastery to which his son was spirited away to keep the Klingon empire from imploding. The monastery is also the protector of the time crystals that the Discovery could use to reboot their plan to send the Sphere date into the future, but the monks will barely entertain visitors never mind part with such potentially dangerous materials. However Captain Pike takes his chances and though initially refused, is ultimately offered a fateful choice…

Meanwhile Michael and Spock investigate a drifting Section 31 ship that appears to have only one survivor, but what can they do against an entire vessel primed to kill them?

The second season of Discovery has not been the most even of missions, boldly going in fits and starts, sometimes soaring, sometimes dragging its heels. It has been a huge improvement on its first run, but we’re now within sight of the end of the current season and it’s all to play for. While one could argue that aspects of both the ‘A’ and ‘B’ story in this week’s episode, Through the Valley of Shadows, don’t push us much further forward, they do raise the stakes: two sets of characters off to encounter elements that don’t really provide answers but add to the texture. It’s one of those entries with solid acting – quite stunning in some cases – that makes it feel important and memorable. And, let’s cut to the chase, it’s Anson Mount’s episode with a set of scenes and a performance that goes to the heart of the character and of Trek lore and may well be discussed for a long time to come.

While James T. Kirk would casually wink and smile and try to Kobayashi Maru his way out of whatever destiny had in mind, Pike has been shown to be a Captain of the Enterprise / Discovery that perhaps better understands the darker role of leadership and truly honours the promised duty to a higher cause… and he takes on an impossible weight for the sake of others – even when given the chance to avoid it – and in doing so Pike joins some of the most important dots in the Trek timeline. Long term fans know that the Christopher Pike shown in the Original Series (technically still to come after the events in Discovery) ends up scarred and almost completely immobilised after an apparent reactor accident. Here, Pike must glimpse that fate and decide if it’s a cost worth paying. In what could easily have been an overtly cheesy or self-indulgent moment, the scene where he comes face-to-face with his future and raises his hand to cover his mouth in a silent scream feels completely organic and understandable and the stoic face that he must then present to the world is a quiet triumph.  It’s no secret that whatever happens, Mount will not feature in the third season and that’s become a considerable disappointment given the undeniable impact he’s had here.

Amid the chaos, a quieter moment also stood out, with Tig Notaro’s Jett Reno continuing to unapologetically steal every single scene she appears in. Here she gives a life-lesson to the resurrected Hugh (Wilson Cruz) about what and who we hold on to and what and who we let go, filling in some of her back story. She lost her wife in the Klingon war – and notes with just the right degree of melancholy about battling against a loss of hope, that ‘People like us always find people like them…thank God‘. It’s the perfect understated counterbalance to Pike’s more harrowing scenes.

Early on it’s not clear exactly where we’re going. I’m no fan of the current Klingon melodramas and it did threaten to throw us back into sub Game of Thrones intrigues that were stumbled through in early episodes of the season. Equally, the talk of incredibly convenient ‘time crystals’, told in in solemn tones extolled from gothic balconies and walks along long glowing corridors sometimes felt like a Doctor Who episode on a higher budget. However Doug Aarniokoski is back as director for the second time this season (his third episode in the entire run) with an important episode and he manages both the pacing and the mood with aplomb, knowing how to go ‘big’ or ‘small’ as needed and  complete with imaginative transitions and strong work from the visual effects department. It’s going to be interesting to see what he brings to the forthcoming Picard show.

We’re left on an ‘Abandon Ship…‘ cliffhanger, though I can’t be the only one wondering why it’s agreed to go with the solution of hitting the self-destruct on the only ship in the galaxy that could instantly warp away faster than any ship could follow?  Either way, the trailer for next week’s episode feels very much like a Best of Both Worlds, Wolf 359-scale event with the return of the Enterprise and the promise of budget-blasting space battles and perhaps Pike’s day with destiny approaching sooner than we thought.  It’s certainly taken a while to get here, but the destination could well prove worth it… 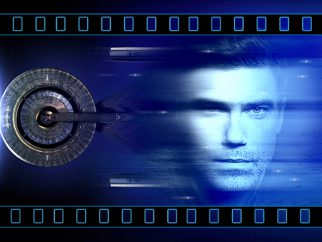