Morgues are never the most inviting places, but 'Hannah Grace' scares up some basic chills...

Megan Reed (Shay Mitchell)  is an ex-cop with something to prove, mainly to herself. After a tragedy at her previous job and overcoming an addiction to medication, she’s looking for an opportunity for something quieter and less risky. When her sponsor, Lisa (Stana Katic) who works in the local hospital, sees an opening for a person to oversee the building’s morgue, she offers Megan the chance to apply.  The cavernous chambers and the ill-humoured boss of the complex might prove intimidating to some, but Megan is just glad to be getting out again…

But things are not going to go as planned. On her very first night it’s not only several dead bodies that enter the mortuary but another unwelcome visitor, a man (Louis Herthum) who says he is the father of one of the corpses brought in earlier… and that the girl’s name was Hannah Grace (Kirby Johnson). He also claims the girl isn’t dead but has been taken over my a malevolent force.  He’s clearly crazy with grief and Megan manages to alert her superiors, but when she notes Hannah’s body again it doesn’t seem to have all the injuries it had before…

While not pushing the boundaries of horror in any unique or dazzlingly new way – indeed there’s a list of familiar set of tropes and cliches which inevitably come with the stalk/shock/spook genre – The Possession of Hannah Grace does execute its story with a certain degree of ghoulish style and the kind of decent pacing that sometimes trips up lesser releases. Like a souped-up rental car, it has lots of new bells and whistles to make it look shiny, stylish and disguise the basic, short but sweet ride… but is, at heart, a remarkably familiar design with a new name and cleaned-up chrome rims.

Should you wish, there’s various stumbling blocks and contrivances and your mileage may vary on whether it overcomes them. Yes, the ‘exorcism and possession’ part of proceedings actually takes up less than the first ten minutes… before moving things along to the aftermath. And yes, for all that ‘Hannah Grace’ is the title character, she’s the morbid maguffin rather than the main character. It’s also fair to note that while a morgue is an obvious place to situate your spookiness, this one has a steely cold and truly cavernous aesthetic only found in ‘de rigueur mortis’ cinema chiller- thrillers rather than real life (and filmed on a massive set that you suspect was left over or  sneakily borrowed from a higher-budget production during their downtime night hours). It’s decked out less like Ducky’s realistically efficient room in NCIS and more like the bespoke underground high-security vault at Tony Stark’s Avengers Tower. That being said, the regulation dark corridors and blinking lights are reliable go-tos and provide the necessary tone and sense of impending dread.

There is some logic to Megan’s (Shay Mitchell) position and the conflict that arise. In some horror outings you want to shout at the supporting cast about their sudden and wholly/unholy lack of belief in their friend/colleague/loved one’s spooky experiences, but here we have an ex-cop dealing with PTSD and needing a low-stress security job…  and who then starts to see strange things in an already creepy environment – so the skeptical reaction she initially gets from others is understandable (and the stress-drugs she’s sworn off yet still keeps ‘for emergencies’ probably don’t help her cause). Equally, security people do come running when called and though security cameras footage initially provides nothing conclusive to back up the specifics of Megan’s story, at least there’s something there that raises the alarm.

Stana Katic, late of Castle and Absentia, is a reasonably big draw for an underwritten part and there’s a continuous feeling that she’ll play a more prominent role than she actually does and The Flash/Station 19‘s Grey Damon as Andrew, Megan’s concerned ex, does all the script requires. Louis Herthum, most recognisable for his other fatherly roles in Westworld and Lucifer, also provides the necessary ‘I told you so‘s’

The Possession of Hannah Grace is a decent way for genre fans to pass a solid ninety minutes. Frankly, 2016’s The Autopsy of Jane Doe, which treads similar spooky ground, did far more with far less and felt more organic, generating a superior atmosphere of impending doom. But all things being equal, it may well be a long time before there’s no room left in hell for such fare.

The Possession of Hannah Grace is out now on DVD in the US and is released on 8th April in the UK. 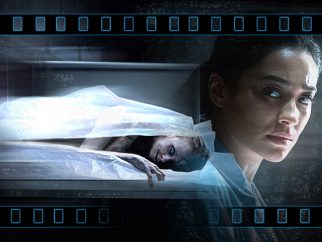