This week's episode of Discovery , Project Daedalus' continues the main story, but the focus is on the under-used character of the augmented Ariam...

Discovery is now a fugitive ship, but Captain Cornwell (Jayne Brook) is invited on board to finally analyse Spock’s story and the claims he was framed. It seems that – surprise! – Spock (Ethan Peck) is telling the truth and the footage has been altered but if elements of Star Fleet have been compromised, then it will require a visit to Section 31’s stronghold to find the truth and initiate access to a fuller disclosure. Spock and Michael (Sonequa Martin-Green ) finally get to discuss tactics and vent their spleens over a game of 3D chess

After finding their way through a deadly minefield, an away-team is formed, but unknown to anyone, Arium’s cybernetic structure has been compromised and could spell disaster for the crew and the entire universe.  Who is responsible and can Arium’s human side find the strength to stop whatever force is moving against them?

Project Daedalus an interesting and memorable episode, one that highlights the show’s rising confidence and significant strengths: we get large doses of action (hand-to-hand combat as well as CGI battles), character development (Spock and Michael’s sibling dysfunction getting some more attention) and a sense of the stakes being significantly raised. There’s also a less than happy ending with a notable death. When you send an away-team off on a dangerous mission an one of them is wearing red, there’s a Trek tradition to expect and uphold, though this episode sees it serve as something of a misdirect (Nhan – Rachael Ancheril – surviving and actually making the hardest choice regarding the airlock at the end).

The one catch here is that the departing character turns out to be Ariam, a character that’s been virtually ignored so far. She might be a member of the regular seen crew, but unlike the Original Series, there’s several key personnel where I’d be hard-pushed to even know their character names. Ariam’s had a handful of lines during the entire run of Discovery (most of them a few words long in the last few episodes), background character often there for exposition and been so underdeveloped that I expect half of the show’s more casual fans still don’t realise the character was recast this year with another actress (Hannah Cheesman replacing Sara Mitich).  It wasn’t even fully clear until this week if she was an alien, an android (which would have, again, put a spoke in the canon-wheel involving Data’s cutting-edge abilities a century or so later) or just an augmented human – a distinction regularly contradicted and changed by even those involved in the show, showing how little consideration had been formalised.  And so, ironically, we have something of an information-dump catch-up during Project Daedalus, filling in the considerable holes in the wide net of Ariam’s back-story and making us care about the character for forty four minutes before sending her on her icy way. The sacrifice and performance, noble and emotive as  they were, would perhaps have worked better if we’d had more time to invest or seen previous examples of her friendships within the crew. The result is an impressive episode, but that would feel like a memorable shiny standalone and shift of focus entry if it wasn’t so intrinsically linked to the on-going story of some highly-technological force messing with the past.

At points that story was hard to follow – but Ariam’s functions had effectively been taken over by ‘Control’ and a rogue faction within Section 31 in an effort to obtain all the information the sphere from earlier in the season had collected about Artificial Intelligence and which may or may not lead to the fiery death of the universe as seen in Spock’s visions from the Red Angel – even though we seemingly later find Control has been dead for several weeks. Hmmmm. Got that? Phew.

Other niggles? Minor ones. Michael was introduced as a more coldly pragmatic character and partly by necessity we’ve come to ses the more human side – but it’s interesting that in a complete u-turn she’s now the most emotive, tear-ducted character onboard. Captain Cornwell’s appearance seems a little shoe-horned in given that the Discovery is supposed to be on the run and Cornwell’s not the obvious go-to to trust. Equally, much as Tilly (Mary Wiseman) is proving the wonderful beating heart of the show, the go-to weekly speeches run the risk of becoming the Trek equivalent of rallying inspirational posters and run the risk of diminishing returns if not used more sparingly.  Beaming the away-team, including Ariam  out of the base would also seem a valid option and if not, should have been dispelled with a few lines of dialogue Also: the title of the episode, Project Daedalus, doesn’t even get mentioned until the dying(!) seconds. But these are after-thoughts that didn’t spoil the viewing.

There’s also more casual references to Michael’s childhood and the loss of her parents – already referenced with some moustache-twirling last week – could that be a story element for the end of this run or for next season?

Michelle Paradise (soon to be co-show-runner) impresses with her screenplay for  the episode and Jonathan Frakes (whose career post-Riker has been impressive behind the camera), does a great job of keeping all the elements well-balanced, going to the heart of Trek. All in all, one of the show’s other key helmsmen, Doug Aarniokoski, was right in our previous interview when he said that he felt most people would think Discovery had found its niche. It’s taken a while and there’s still several episodes to go (and the Red Angel story-arc could still dazzle or fizzle), but it’s clear to see the disparate parts coming together…. (maybe, dare we hope,even a tie-in to the short-ep Calypso?) 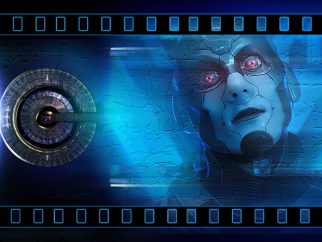 Have Gunn, will Guard… Disney’s reinstatement of intent…