Discovery – caught between a Spock and a hard place…

Michael heads back to Vulcan in search of answers and clues to where Spock may be and find the answers closer to home than she realised. But will that revelation mean she has no choice but to involve Section 31 and what will be the cost?

Meanwhile, back on the Discovery, a probe into the latest anomaly triggers a time-distortion that could have grave repercussions for Pike and Tyler aboard the ship’s shuttle…

The character that the entire season has been teasing  – talking about,  then avoiding featuring – finally turns up in the latest episode of Discovery and, wouldn’t you know it, spotlighting the narrative’s tendency to project and swerve, he’s actually back on his homeworld, secretly hidden away by his Earth-born mother, Amanda. Seriously  the last place you’d look, right?

Apart from brief flashes, this is the first time we’ve really seen Ethan Peck in the Spock role and due to it largely being a case of him scrawling on walls and mumbling Lewis Carroll quotes, it’s still difficult to judge how he’ll measure up to some of the more recognisable names

The actual Red Angel story-arc lurks around in the fringes as the continued unanswered mysteries hang like a sword of Damoclese over proceedings, revealing a few specifics but mostly dictating further questions rather than true explanations. The stories we do have are mostly divided between Michael’s attempts to decipher Spock’s ramblings (‘Through the Looking Glass’ rather than Mirror-Universe) while the rest of the crew of Discovery (Pike and Tyler, specifically) board a shuttle and face down a time-distortion left behind by the Red Angel’s most recent appearance – one that keeps giving them glimpses of the immediate future.

Essentially, Light and Shadows inches everything forward just a little, manoevering some of the players into different positions rather than giving them actual momentum. Georgiou, clearly with an agenda of her own, tells Michael the tests on the newly-delivered Spock will likely destroy his mind and instructs her to grab Spock and escape the Section 31 ship, pretending it’s a jail-break (and does the double job of consolidating her power-play and making the Burnham and Spock fugitives). What we do know by the end of the episode is that the Red Angel appears to be some sort of humanoid from five hundred years in the future, but Pike is rapidly coming to the conclusion that Tyler may be right and that its appearances may be less than purely altruistic. The biggest revelation happens in the final few seconds when Burnham simply reverses the numbers Spock had been reciting  (why did no-one else try that?)  and realises they are the co-ordinates of one of the most famous planets in the Original Series – Talos IV… the world from classic Trek‘s The Cage / Menagerie episodes (which also featured Captain Pike) and one that is forbidden to visit on pain of death (but which we’ll see anyway next week!).

The best moments of the hour are Tilly cutting through the show’s propensity for save-the-day technobabble (on show in full force this week) and pointing out, in very Moffaty fashion, that ‘Everything sounds cooler with the word ‘time’ in front of it…‘ and the Talos IV reveal. Otherwise, this is a connective tissue episode, but one that displays some solid-as-always special-effects work (if somewhat ‘Matrix-y’) and an episode that basically reminds everyone why we’re here and what we’ve been waiting to see.

One suspects (and hopes) that this is a sign that, going in to the latter half of the season, the season starts to bring its various threads together and creates a real velocity, rather than just having Spock and Burnham playing fugitives and cat-and-womprat with their pursuers. On the strength of the trailer for next week, things are looking good.. 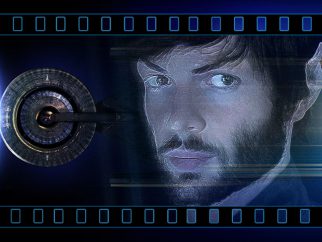