Star Trek: Discovery's latest episode 'Saints of Imperfection' doesn't make a lot of sense, but it does provide more emotional impact for its cast...

Spock’s shuttle is located but when it’s brought back on board, the pilot is not who the crew expect it to be – and even when they make their mark, Burnham (Sonequa Martin-Green) cannot reveal the full truth to her Captain.  But the search for the fugitive Vulcan will once again have to be put on hold because Stamets  (Anthony Rapp) refuses to believe that Tilly (Margaret Wiseman) has been killed by her recent dimensional ‘passenger’ May and looks able to prove it.  Under the remit of ‘no-one left behind’, Pike (Anson Mount) agrees to a rescue attempt that involves dangerously wedging the ship halfway into the mycelial network for a very limited period.  As Burnham and Stamets begin their mission, Pike finds that two old colleagues from his days in Star fleet appear to have fundamentally changed their outlooks and finds himself in the awkward position of needing their help but not fully trusting them.

Meanwhile, in the mycelial network, Burnham, Stamets, Tilly and May (Bahia Watson) are about to discover that for better or worse, nothing is ever truly lost…

If Discovery is regularly adjusting its viewscreens to emulate the tone of diverse and divergent other shows, then this second run has already presented us with the Original Series and Game of Thrones and now we have Stranger Things as Burhnam and Stametts head into what looks suspiciously like the ‘Upside Down’ by way of blacklighted James Cameron trademarked Pandoraesque foliage. The Search for Spock (tv version) once again gets little more than name-checking and an excuse to keep Section 31 on the radar. With this many artificial diversions – which look likely to continue next week – it would have been more practical to leave any of Spock’s story to later in the season rather than dangling him like a Vulcan carrot.

As always, it seems better to judge each episode of Discovery on its own merits rather than that of the whole.  In that way, there’s much to praise about ‘The Saints of Imperfection‘. But while the dramatic performances are good and the actors all bringing their expected A-game, for several reasons the series feels more like the central plotting and pacing of a solid comic-book that keeps rebooting as new writers tilt towards different windmills. By that I mean:  1)… the characters continue to become whatever the episode needs them to be in the series/moment ( Emperor Georgiou has moved from black-hearted galactic-tyrant to boo-hiss black-ops ninja, Ash Tyler has gone from unsure Starfleeter to Khal Drogo back to conflicted liaison officer in head-spinning time… literally, because as far as the Klingons are concerned he was beheaded, so let’s hope no-one tells them!). 2)… this is another one of those situations where the characters have to simultaneously work against a dramatic clock and countdown and yet somehow still spend entire scenes monologuing and discussing their personal thoughts and plight, standing around and pondering the universe where a few feet away others are fighting for the lives. There’s even a scene where two characters are pinky-swearing and promising to write while others are seconds from sliding towards almost certain death… and it removes some of the needed tension.

3)…this is another emotive entry that pulls off some highly convenient sleights of hand with just enough ‘feelz’ to probably let you give it a pass. If you’re aware of some of the revelations and assurances that the production announced as a result of events in the first season – and their promise that, despite appearances of such, Discovery wasn’t going to let a  familiar, controversial plot trope play out for too long –  then one of the bigger casting spoilers will have been less of a surprise. But if you don’t know…. then the return of a familiar face has the air of a comic-level ret-con, an almost fan-fiction way of reversing a key milestone moment.  While the returning actor (and Anthony Rapp) give it their all and deliver well, it does take away a little from the notion that Discovery is boldly going into edgier, permanent consequences.

Once again, there’s no criticism of the show’s effects-budget, the upside-Downian  ‘mycelial network’ scenes and the ‘doorstopped’ wedging of the Discovery between dimensions is lovingly rendered with perfect pixels and a sense of peril. The ideas (organic transporters, genetic adversity!) are interesting even if the technobabble and suspended logic of such is baffling and the level of technology on show continues to be continuity-awkward – but that’s something that will have to be largely accepted.

As ever, Discovery continues to deliver in many departments  (Mary Wiseman and Anthony Rapp in particular are proving revelations with Anson Mount also regularly finding just the right tone for Pike)  and it remains must-see television – while at the same time continuing to evade having a core tone or mission-statement that feels consistent or particularly co-ordinated. It’s science-fiction by very talented committee, but each with their own agenda and it would be nice if the voices didn’t fluctuate quite as much… 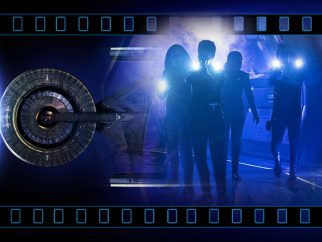