The second episode of Discovery's new run plays to some of Trek's basic strengths...

When another anomalous reading is detected  – similar to the mysterious pulses recently detected elsewhere in the galaxy – the only ship able to travel such distances in the needed speed is the Discovery. As Burnham (Sonequa Martin-Green) and Pike (Anson Mount) compare notes – and Spock’s current whereabouts are revealed – the ship drops out of warp and finds what appears to be a human colony, but far further afield than mankind has boldly gone before – at least officially.

A distress beam with incomplete audio from Earth’s World War III seems to hint at a link to an event in Earth’s history, but that still doesn’t explain the colony, especially as it doesn’t have warp technology. With the Prime Directive in operation and unable to reveal who they are, Pike, Burnham and Lt. Owosekun (Oyin Oladejo) beam down and pretend to be travellers from ‘the North’ (because all planets have a North).  Not all the ‘locals’  – whose religion is an amalgamation of many previous Earth faiths – are convinced by their story, but Pike insists they keep the truth hidden as they investigate.

Meanwhile, on Discovery, Tilly (Mary Wiseman) makes an important discovery, meets an old friend and must find a way to save the colony from another imminent threat…

While not perfect – the pacing is just a little off, perhaps trying to squeeze too much in – one would have to actually engage maximum warp cynicism to not find something to like in the mix here  – and the sense that the show is finding some sense of tone and balance is quickly increasing.  There’s a genuine feeling that the positive exploration tone of the Original Series and the modern CGI capabilities can complement each other nicely if the focus is kept… and that will be the trick as it’s still clear there are a lot of ideas competing for screen-time with more to come.

This week, specifically: The idea that a large group of humans could find themselves on another planet feels like a well-worn  sci-fi staple and a hook that could have its place in the 1960s series, especially with all the talk of the restrictions surrounding the Prime Directive.  Here, Pike – rapidly becoming likeable for ‘his by-the-book under any circumstance… until it’s just semantics and then I’m open to any and all ideas’  attitude – eventually characterises the ruling as essentially not getting caught out interfering with the development of a pre-warp civilisation rather than actually remaining wholesale neutral. It’s a general question and dilemma that’s appeared in a number of Trek outings over the years often with differing outcomes. Here there’s some moral and convenient wiggle-room provided (too much, too little, just right, your mileage may vary) but it works within the story and arguably leaves a more satisfying conclusion for all concerned that’s in the spirit of narrative positivity if not strictly by-that-book. (It might have solved some of the problem if Discovery’s own presence had been the catalyst for the debris field forming rather than the solution and thus obligated to offer aid).

In some ways that immediate ethical problem is more interesting than the bigger  ‘Red Angel’ question of who or what might be responsible for the people’s cosmic transplanting and other galactic occurrences mentioned in the opener. While being set up as  one of the big series-arc mysteries, one so impactful that it’s already sent the off-screen Spock to a psychiatric hospital, there’s a niggling feeling that whatever the eventual revelations they’ll leave some dissatisfied and so it’s literally the journey into mystery not the destination that could be the most fun here. Then again, Trek has had a fairly fluid relationship with the notions of faith and science, so it’ll be interesting if the specific quote about anything sufficiently scientifically advanced seemingly appearing like the divine will be played out or not in a series that takes place before many of Trek‘s most memorable other missions.

On board the Discovery, Tilly remains a fun mix of dizzy and genius, Mary Wiseman imbuing her with enough heart that the nervous motormouthing isn’t too annoying and the pragmatic technobabble solutions only a little too convenient.  The audience will likely be one step ahead of her when it comes to the ‘help’ offered by the previously unmentioned friend and colleague May Ahearn (Bahia Watson) and there’s an argument that such scenes come at the expense of screen-time fleshing out the colony’s inhabitants who get quite short shrift.

‘New Eden‘, directed by no less than Jonathan Frakes, technically pushes no new boundaries and retreads familiar ground – but it plays to Trek‘s established strengths. Given that one of the past complaints has been the amount of really. big. plot. developments ™, it’s actually fine to establish some of the more traditional, expected template beats this early in the run.

Much has been made of the friendly but passionate rivalry between Discovery and tongue-in-cheek homage The Orville. The truth is, the universe (Mirror or otherwise) is big enough for both and it’s a good time to be boldly going in general. 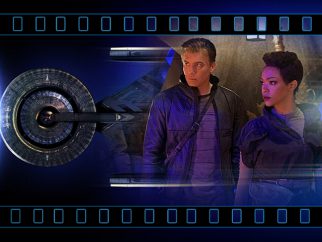