Netflix original film 'Close' boasts an excellent heroine but saddles her with a ho-hum story...

Sam Carlson (Noomi Rapace) is a bodyguard / protection officer who takes her role very seriously. Able to put any doubts or personal problems aside to get the job done, she’s ruthless, pragmatic and incredibly good at her job.  But when her next assignment summons her from the sandy threats of a desert to the English estate of a spoiled oil company heiress, it appears to be an ill-fit for everyone concerned.  Carlson doesn’t want to be a babysitter, the teenage Zoe (Sophie Nélisse) resents having one. However after a volatile business deal begins to waver, Zoe’s step-mother, Rima (Indira Varma), is determined to hold on to the reins of the company and needs Zoe to be kept out of trouble – even if that means confining her to a far-off Moroccan estate. The family’s all-male security detail make no effort to hide their distaste for Carlson, but after recent developments, security is imperative and Rima demands a  bodyguard that ‘Zoe can’t fuck’.

But before Sam can depart the Moroccan compound, there is a deadly attack and an attempt to kidnap Zoe. Sam and Zoe manage to escape into the twisting side-streets of Casablanca but find themselves cut-off from help and pursued by corrupt police-officers. Who is behind the attack and as their options decrease… who can they trust?

The first ten minutes of Netflix‘s original movie Close, including a haunting and enigmatic cover-version of Kate Bush’s ‘Running up the Hill’, presents the kind of opener that promises a lot.  Most ‘action’ movies go for spectacle over logic, but Noomi Rapace’s soldier (or, more accurately, Protection Officer) is not just a physically believable action heroine, but the pacing, cinematography and intelligent choreography work together to give us an introduction to a character who has true smarts – a desert ambush is thwarted as much by her brains and instinctive tactics as it is by her actual sharp-shooting.  It’s brutal and effective without ever looking like it’s a martial-arts promo reel.  Fine, Sam, we subsequently learn, might also conveniently encompass some of the checklist of cinematic hero traits and foibles (snark, troubled private life, estranged family and a lack of some social niceties) but she is a character we can root for, want to see more of and, pragmatically want on our side when the going gets tough.

The problem with Close is that it takes a 21st century role model and ‘realistic’ (if heightened) sensibility and quickly grafts on what feels like an 1980s template: essentially being more interested in seeing what happens to Sam when she’s initially taken out of her natural environment and needs to apply her particular set of skills in a different way. The ‘tough ̶g̶u̶y̶  gal has to baby-sit spoiled brat and both learn things from the experience’ template is one that’s been covered by Stallone, Schwarzenegger, van Damme and Seagal et al and though this isn’t played for laughs or light relief, it does feel like the central character is better than the story. One can complain that action movies are better when there’s some heart and mind alongside the fisticuffs, but the irony is that Close is at its best when relying on the ‘think on your feet’, close-quarter combat set-pieces and fares less well when saddled with telenovella-template  family snark. It’s as if someone saw The Raid and thought the one thing missing was ‘Dynasty’ and ‘Dallas style intrigue.

Swedish actor Noomi Rapace, who actually broke her nose filming a fight scene for the film, is one of those versatile kick-ass performers capable of both impressive physical and emotional range. She was the original ‘Girl with the Dragon Tattoo‘ and has since impressed in a range of productions that include Prometheus, The Monitor, Bright, What Happened to Monday? and Child 44. If you want a damaged, enigmatic character with a sharp edge, she’s your edgy go-to – especially if you’re Netflix. She commits herself to the roles she takes and with ‘Sam Carlson’ it shows, never feeling the need to play to the audience rather than the story. There’s an efficiency she brings to Sam that’s not uncaring, but simply precise and pragmatic, a weathered determination that does what’s necessary and stores up regrets for later. (Rapace will soon be playing the title role in Callas, a biography of Maria Callas, which could well be amazing).

Canadian actress Sophie Nélisse plays Zoe and does better than you’d expect with the limited scope of what’s she given, giving her spoilt heiress some eventual backbone if not an entirely satisfying story-arc. The other members of the cast are merely supporting players. Familiar and reliable face Indira Varma could play the opportunistic matriarch with her eyes closed and Eoin Macken (last seen in Night Flyers) is largely wasted. Both roles feel could have been better if given more room to breathe in the limited series that Close seems to yearn to be. And that’s the stumbling block – Close is a production that feels like it’s sandwiched somewhere between a low-budget movie and a big-budget pilot for a Bodyguard-meets-24 initiative tv show. On one hand, that early hand-to-hand intro delivers a sequence worthy of the best most tv shows – on the other the actual main story and pacing start to flounder in the second half, as if the production ran out of time and money and squeezed the ‘best’ bits into one ninety-minute outing with a curtailed finale.

Director Vicky Jewson is clearly a name to watch and it would be interesting to see what she and Rapace could make with a better script and budget. 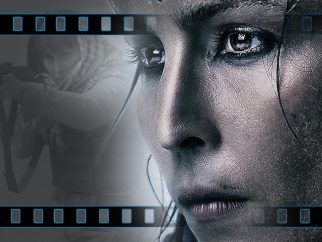