The final entry in the 'Short Treks' batch is played for laughs. Here's Mudd in your eye...

Harry Mudd (Rainn Wilson) is in trouble. To be fair that’s nothing new. But it appears that this time he’s going to have to use every dirty trick in his arsenal to convince his captor, a sceptical Tellarite (Harry Judge) not to hand him over to the Federation for a considerable bounty. Given that the Tellarite is already less than happy for Mudd apparently stealing a family heirloom and that Mudd’s stories of personal woes have more black holes in them than the entire quadrant, the chances of Mudd getting away are looking decidedly murky.

But he’s been in similar situations before – and likely will be again – so what is Harry’s real game? And what exactly did he do to that space whale?

Doug Aarniokoski recently told us about the ongoing appeal of Trek and the Short Treks have done exactly what they set out to do: bridge the gap between the seasons and highlight different aspects and potential of the franchise. Each entry has been quite different and yet fit under the Trek umbrella in notable ways.

The latest, The Escape Artist,  is largely played for unapologetic comedy and in an almost a perfectly named partnership, Rainn smoothly essays Mudd.  Rainn Wilson takes centre stage as both director and star and allows him to reprise the role of Harry Mudd he played in two episodes of Discovery last season. (Of course, Robert C. Carmel famously played the character in two memorable episodes of the Original Series – and an animated entry – which are technically set a decade later). The Escape Artist is essentially a non-stop romp and comedic patter that show a captor taking Mudd back to claim a large bounty on his head from the Federation and the prisoner trying repeated ways to dissuade him from that fate. With a few side-journeys, it’s mostly a two-hander with Wilson’s/Mudd’s  personality dominating. It’s also largely a situation where you get exactly what you expect – the fast-paced chewing of scenery and that’s perfectly fine as that’s all that’s needed to succeed here. The short, fast format suits the situation perfectly, zipping along with its segues and punchlines and has a solid success rate for both. There’s pretty much nothing that Mudd won’t try – bribery, exaggeration, deceit and even possible violence to escape his bonds and in doing so we’re treated to flashbacks to similar situations he appears to have been in before… with varying levels of lack of success.

Wilson gives us a deliciously deceitful character, another screen creation that the audience can love to hate and if there’s a danger the opportunistic Mudd will always be seen as light relief (as well as light-relief danger), well, that’s partly being established decades ago and so why mess with it? A weekly appearance would probably dilute the appeal, but Mudd’s use as a self-obsessed rogue element guaranteed to mix things up and send things off-course is a perfectly fine diversion and all we need are slight variations on that theme, especially if they are snippet such as these.

These shorts have worked well.The enigmatic Calypso may have been the most critically-acclaimed and emotionally satisfying of the ‘Shorts’ but each has independently brought a little something and made the gap between seasons feel a little shorter and The Escape Artist is not only fun, it’s a sneakily-designed and smarter-than-first-appearance outing with a good pay-off.

With just over a week to go before Discovery warps back onto screens, this final appetiser won’t fill you up, but will easily satisfy a sweet-tooth. 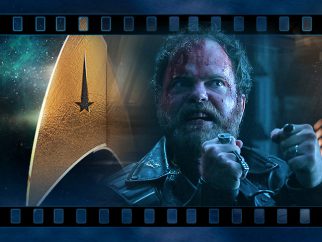