The most recent season of 'Doctor Who' has divided critics. But what of the New Year's Day special and 2019's only timely, relative-dimensional outing?

The Doctor (Jodie Whittaker) is giving her team a treat, a successive string of ‘New Year’ celebrations across the galaxy. But their celebrations are cut short when the Tardis alerts her to There was no unwrapping of an extraterrestrial signal that seems to be pulling different objects together from across the world.  Meanwhile, in the sewers below Sheffield archaeologists Mitch (Nikesh Patel) and Lin (Charlotte Ritchie) are collating some finds that could prove to highlight the truth behind a battle near the city in the 9th century.

However history has a way of being repeated and Mitch and Charlotte are quickly going to be in need of a Doctor as the once dormant force behind the signal attempts to recreate its powerbase and remit to send a signal to an invasion fleet that it believes are still out there.  After the Doctor investigates, she realises that the creature and its plans are more dangerous than she could have feared. As Ryan has a meeting with his estranged father, Aaron (Daniel Adegboyega) the Doctor also has a date with destiny…

Because the DNA the creature leaves behind has a unique signature. It comes from the planet Skaro and is often encased in a metal shell that the Time Lord has encountered so many times before: a Dalek…

There was no unwrapping of a sparkly new Doctor Who episode on Christmas Day, thus breaking a timeless tradition that, well, only goes back just over a decade but seems like far longer. There was much gnashing of teeth and tapping of keyboards when the news came that the Time Lord would miss the coveted holiday slot, but would instead make their way to New Year’s Day, thus ensuring that 2019 would – on a technical level at least – not be a barren year for Gallifrey.

The past season – Jodie Whittaker’s first – has somewhat divided fans. Those who fretted very specifically about a female-lead had nought to worry about – the fluid gender of the Gallifreyan traveller was one of the aspects that fitted almost seamlessly into the mythology and Whittaker is a compelling performer. However the show shifted in other ways. On a personal level, I’ve tried very hard to like the show as much as I genuinely wanted to, but even more than usual after a regeneration, it seemed like an entirely different beast on many a level. The Doctor, for whatever reason, was now written as being far from the smartest person in the room – scatterbrained, well-travelled, chummy and anecdote-friendly, but perpetually confused and lucky rather than immediately formidable. Anyone expecting Chris Chibnall to bring in a serialised and even slow-burn Broadchurch like structure was well off the mark. The recent run felt geared to a younger and perhaps less demanding audience. Creatively, format-wise, publicity-wise, personality-wise and story-telling-wise it just felt a disjointed three-point turn back into the 1980s style of adventuring. In doing so it shook off the sense of the ‘look at me!‘ smugness that had begun to permeate the latter part of the narrative in Steven Moffat’s run but also lost some of the more genuinely clever and sharper edges. It felt like someone had waved a finger at the production and said ‘More accessible, less indulgent!’ and the barometer had simply swung too far to accommodate. And the parts never quite aligned smoothly… early crystalline animation unveiling the new logo didn’t really match with the eventual inky screen-saver opening credits, the eventual revelation of the Tardis interior looked like a set that could have been built three decades ago and the publicity initiatives treated minor episodic details as state secrets while sometimes fumbling the reveal of genuine spoilers.

However, your light-year mileage may  – and should – vary: the ratings notably remained impressive and the one thing Doctor Who fans should be able to agree on is their ability to disagree and know that further change will always be along shortly.

So what of ‘Resolution‘, a title that – despite the lack of opening credits once more – might as well have had “…of the you-know-whats” tattooed on its script as early rumours of the ‘big bad’ had proven harder to avoid than seasonal Whamageddon challenges and revealed what the threat would be months before (and the BBC’s final trailer had confirmed in late December)?

The good news, this is by far the best episode of the recent batch. There’s better scope, better use of budget (the interior of the Tardis even works better with some holograms) and while the script still needs Whittaker to discuss her thought-patterns out loud and to brandish the sonic like a stage-craft sword, there’s the actual chance to see her being angry, frustrated and in a more action-mode than has been on show in past weeks. The regular cast work well together and there’s a genuine feeling that the crew on both sides of the camera are getting more comfortable.

Tosin Cole’s Ryan is more interesting and better written in a couple of scenes than he has been all season, rightly telling his estranged dad Aaron that merely showing up with a Chekov Gun-shaped microwave and claiming he wants to be a better parent isn’t really enough.  Bradley Walsh’s strongest scenes are also in the domestic setting where Graham also lays down some home truths. Yaz (Mandip Gill) gets to act like the police-woman that she’s forgotten she is for a few lines but is otherwise seems there largely for emotional support. I can’t be the only viewer who enjoyed the guest-star roles of Nikesh Patel as Mitch and  Charlotte Richie as Lin and wonder if they’d actually be more interesting to follow as future companions.

There’s a car-chase which is reasonably well shot and resulting in some nice comic dialogue, some genuine creepiness with the Dalek’s possession of Lin and a flashback to various historical sites that combine stock footage and good camera-placing to prove more realistic than one might expect. Mirroring the recreation of the modern sonic-screwdriver, there’s arguably still some frustration in the fact that the fugitive squid essentially enters a steelworks and one quick montage later has the basic familiar shell of a Dalek complete with blasting power, levitation ability and all the familiar space-Nazi attributes with just the smallest touch of slimline steampunk shortcomings. It might have been better and more believable if such components could have been more fully reconstituted from a larger, simply empty shell at a deniable UNIT black-site rather than just a handful of components miraculously welded together, but Chibnall has already closed that avenue with what feels like a timely swipe at modern politics and the news that the taskforce has been closed pending a financial review. (No more UNIT, say it isn’t so!)

It’s worth noting for all the chummy-paliness of Whittaker’s fam-friendly Doctor she’s proving wholly reckless with her companions and their safety. The first adventure saw Grace killed in her eagerness to help and here the efforts to finally get rid of the lone dalek seem to be no better planned that opening the doors and letting him be sucked out into space… the notion that such an act might obviously take the hostage’d Sinclair Snr. (Daniel Adegboyega making good use of his scenes) along with it seems like a forgotten inconvenience that should have been better written or not as easily forgiven thereafter.

The show still feels less tightly realised than the previous era, a romp designed for fun rather than a saga designed for memorability – edging to be more Russell T. Davies than edgy Steven Moffat though the early Eccleston episode ‘Dalek‘ episode was by far much darker in similar territory. Resolution‘s set-pieces are convenient rather than entirely logical, designed for action rather than emotion (the latter being more apparent in the domestic ‘B’ story)  but perhaps ‘Resolution‘ ties up the opening salvo of the new Doctor Who era in a way that will lead to building on some of the strengths and continuing to evolve.  A full season on, there have been improvements if not expected wholesale character-growth… but with a year to consider its options and where to go next (‘everywhere’ needs to be a tad more specific), we can  keep our fingers crossed… 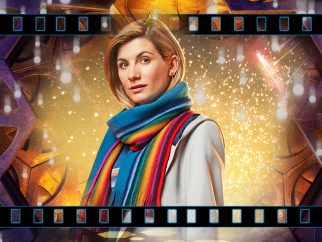