To Protest and Server… but does ‘Kerblam!’ deliver..?

It's not docket science for the Doctor's visit to a cosmic version of Amazon...

The Tardis receives an unexpected delivery, courtesy of the galaxy’s most expansive shipping company, ‘Kerblam!’ and while the Doctor is delighted by the contents, Yaz notices that it also include a secret plea for help – and that’s one thing the Doctor can never turn down.

Infiltrating the vast Kerblam! facilities – a sorting office that’s the size of a small moon – proves reasonably easy: just a flash of bravado and psychic paper, but once inside the real puzzle begins. Why are the humans, who form less than 10% of the otherwise automated workforce, disappearing and why isn’t their absence being noted?  Are the overtly-helpful but sinister robots the cause or could it be the muddling middle-management, Judy Maddox (Julie Hesmondhalgh) and Mr. Slade (Callum Dixon)?  Can the likes of workers that the Tardis crew are assigned to, Dan (Lee Mack), Charlie (Leo Flanagan) and Kira (Claudia Jessie), help?

As the disappearances continue, it becomes clear that the request may have come from an unlikely source…

On paper, or ordering docket at least, Kerblam! should work – it contains every element needed for a typical Doctor Who adventure. But ultimately, it’s another example of an outing that will depend very much on what you want out of a show that seems to be deliberately distancing itself from its recent seasons. The episode feels like proof positive that Chibnall (and the episode’s writer Pete McTighe) is aiming for an old-school Who era vibe – an easy-accessible template with a checklist of story-beats, disposable guest-stars and a nearly-for-all-the-family approach tinged with just a few moments of darkness. For those with longer memories there are obvious stylistic doffs of the sonic to Tom Baker’s Robots of Death and McCoy’s Happiness Patrol and for more recent converts, the Tennant era’s Agatha Christie (The Unicorn and the Wasp) gets name-checked along with the express return of Matt Smith’s fez. Indeed, for better or worse, it’s fairly easy to imagine several other Doctors being switched into the story with very little change to the plot or even the dialogue.

But the result is also a mixed bag. Whittaker – certainly able to be a dynamic and powerful actress when the opportunity demands –  continues to play a Doctor who often feels one step behind the action, consistently musing aloud about what she’s missing, scolding herself for missing it and then  playing catch-up to find a last minute ‘Hail Mary’ technobabble solution and flourishing her sonic in order to save the day.  Previous incarnations have had their share of deceptively scatterbrain distractions and conveniently reversing the polarity of the neutron flow at the very last moment, but this is the first Doctor in a while where I genuinely don’t feel they’re the cleverest person in the room, merely the most journeyed. (There’s an argument to be made that recent Doctors have been too arrogant and even god-like in their demeanour, but so far ’13’ feels to be overcompensating and more like a substitute Social Studies teacher than the Oncoming Storm).

The supporting cast are all given jobs to do (literally) in the Kerblam! stakes but there’s still the feeling that having three companions spreads their development too thinly. Indeed, the fact that later episodes in the run were apparently so easily re-ordered  (last week’s Punjab episode was possibly slated to be the ninth with next week’s The Witchfinders originally slotted for sixth) reveals the scarcity of any substantial  character-arcs and just how little they’ve been explored. The show suddenly remembers that Ryan (rapidly becoming the Mickey/tin dog of the current run)  suffers from cliff-note dyspraxia and that Yaz is/was a take-control AWOL police-officer and briefly references both,. But they are factors that have barely been mentioned since the opener and the lack thereof feels somewhere between lazy or just a regularly missed opportunity.  Bradley Walsh’s Graham actually gets the better dialogue and one wonders if he would have been even better had he been a third of the Team Tardis rather than a quarter. Lee Mack joins the growing list of comedians who make a guest-appearance and while he’s no Frank Skinner, he’s engaging enough.

After the period-drama of last week’s partition-themed episode, Kerblam! is there to reassure viewers that there’s an abstract space-based silliness to be embraced as much as social commentary. Equally, Kerblam! scores some points for subverting the expected outcome. All too often sf stories point to the danger of machines taking over the world (and it isn’t robophobic to point out the show has a rogue’s gallery of sinister cyborgs and dastardly droids) but here the plea turns out to be from the ghost in the machine itself and the real danger turns out to be human – and not even with the somewhat ineffective middle-management, but a disenfranchised shop-floor worker.  (If you want to think about it all as less of an all-out romp and more in topical cultural terms, it’s a simultaneous dig at the over-industrialised capitalist state while being equally critical of any anti-Antifa /extremist stance, noting that the answer is very rarely a bombing campaign!  However, it should be noted that the Doctor does seem to overlook the fact that sweet, little, ill-fated Kira is deliberately placed in harm’s way by said ‘benevolent’ computer system simply to make a point).

Television budgets, on the other hand, are not hugely benevolent when it comes to visual effects and Kerblam! manages to execute its vast, cavernous facility remit by dressing up rather bland hallways and offices for the most part and only cutting to the CGI’d conveyer-belt matrix for one chase scene and employing a army of static warehoused  ‘I, Postman Pat Robot-esque’ towards the end. Like any glimpse behind the gleaming storefront curtain facade, it simultaneously appears cheap and cheerful despite the promos. Equally, the idea of making bubble-wrap the delivery system of a cosmic pathogen is undeniably brilliant… because is there a life-form in the known universe that can resist popping it? (And imagine it as a ‘Twirly’ or Julie Hesmondhalgh action-figure accessory!).

Kerblam! is fine, disposable fun, playing lip-service to deeper issues but essentially it’s luck, stockroom and two smoking barrels of satire. But Doctor Who needs to take care that it doesn’t fall into the bubble-wrap trap: addictive enough to keep you popping in, but essentially simplistic space-filling and place-holding… rather than a show that should rightly be in its (Amazon) Prime. 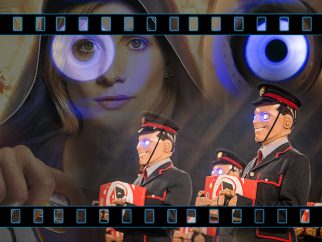