Latest ‘Who’ season to end in heat of ‘Battle’…

The latest Doctor Who run has seen few spoilers or even preview opportunities - but now we do know a little more about the final episode and have a new photo!

It seemed we had to wait an age for the return of Doctor Who and even since Jodie Whittaker plummeted into a Sheffield train carriage there’s been far less information about upcoming episodes than there has been in recent years. But we’re now in the latter half of the season and we’re getting some details of what we can expect in the season finale.

For example, we now know that the final episode of the current ten-story run is called The Battle of Ranskoor Av Kolos and the official description reads as follows:

‘On the planet of Ranskoor Av Kolos, lies the remains of a brutal battlefield. But as the Doctor, Graham, Yaz and Ryan answer nine separate distress calls, they discover the planet holds far more secrets. Who is the mysterious commander with no memory? What lies beyond the mists? Who or what are the Ux? The answers will lead the Doctor and her friends towards a deadly reckoning…‘

It’s unclear if, as rumoured, we may see the return of some of the supporting cast of previous episodes (nine distress beacons, nine episodes – could just be a coincidence!) or if there’s any truth to the rumours that Chris Chibnall’s carefully worded statements at SDCC might have obfuscated a late appearance from the Daleks in the dying moments of the run. So far, all the threats have been entirely new, but who knows what might happen between now and the end of the seasonal special (which is now confirmed for New Year’s Day rather than Christmas Day)?

We do know that a new teaser image was released at midnight and we can see Jodie’s Doctor carrying a large crystal-shaped object and that she and ‘Team Tardis’ (including guest-star Mark Addy as a character called ‘Paltraki’) all seem to be wearing some kind of cybernetic device on their heads. And, in a tribute to classic Who, that does look like a quarry! 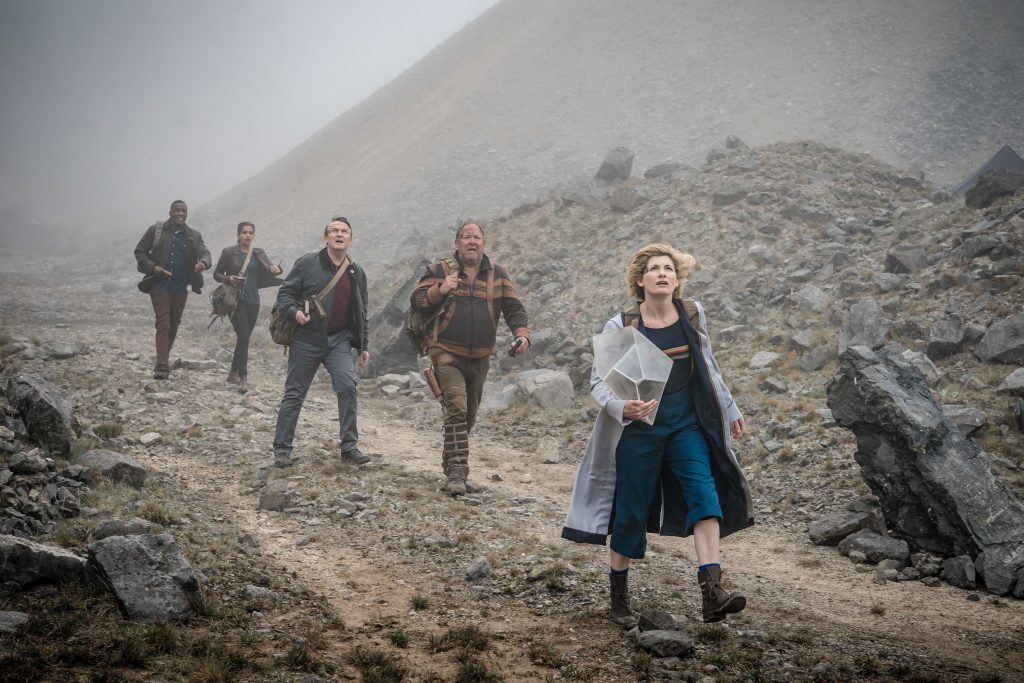