Halfway through the current season and it's clear the new run of 'Doctor Who' is echoing the classic series and its target audience...

While scavenging for parts on a junk asteroid, the Doctor and her team accidentally set off a sonic mine and end up in the Tsungara medical facility, needing time to recover. But time may be a luxury because separated from the Tardis means that there’s no way off the ship when it is targeted by a strange creature that certainly doesn’t have their welfare and hood health at heart. But with a dangerous life-form onboard, passengers in need of urgent care and a back-up computer system defence that could be just as dangerous as outside forces…the ship may need more than just another Doctor…

This  is the first episode of the most recent season in which I can imagine several of the other Doctor’s incarnations handling the situation in a similar manner – albeit with different levels of annoyance, prat-falls or frequencies of apology on the way to the climax. Every Doctor lives for a life-or-death struggle which hangs on solving a puzzle – or, indeed, a ‘Conundrum’ – and though Whittaker’s version takes a while to get there, it’s good to see the Doctor when they have to work a little harder than just being the right person in the right place at an inconvenient time.

However despite the literally pivotal role the anti-matter drive plays in proceedings, The Tsuranga Conundrum episode itself doesn’t really have a core element.  Instead several disparate ideas spin around in a loose orbit, desperately looking for a way to contribute to the whole and the result is very disconnected with any one of them being able to be jettisoned like an escape-pod if necessary. The Doctor is busy brain-storming, a decorated commander Eve Cicero (Suzanne Packer) contemplates her mortality and strained relationship with brother Durkas (Ben Bailey-Smith) and Graham (Bradley Walsh) and Ryan (Tosin Cole) are side-lined with being aides to a pregnant man (Jack Shalloo) – which just about emerges from its punchline pitch to give Ryan a chance to talk about his absent father.  Yaz is once again bafflingly under-used, though she and Ryan also share some heartfelt stories about family. Cicero’s ‘consort’ a humanoid android that makes Data look enthused hangs around and contributes virtually nothing to the plot. The episode lasts fifty minutes and simply doesn’t give enough time for any of those situations to breathe or arc in any organic way and so some of the intended emotional pay-offs don’t work as well as intended.

The CGi holds its own, making the diminutive Pting a careful cross between an almost cartoonish petulant toad and a genuinely pissed-off threat. (Named as if after a sound-effect, it brings back memories of ‘the Meep’, the first threat the comic-strip Doctor faced in his own magazine all those years ago). It’s instinctive imperative makes it Doctor Who‘s answer to a Tribble – essentially a creature that’s not out to harm anyone except by default. But once in a while it’s good to be reminded that size isn’t important and every threat doesn’t have to be of Cyberman proportions.

Development-wise, this is the first time we’ve seen Whittaker’s Doctor act selfishly, even if she does blame the sonic boom and her recuperation process for her momentarily putting her and the Tardis ahead of innocent passengers. Some parts of fandom have been wondering if having three companions all joining at the same time has meant that the stories and character-arcs are being diluted and though each still has potential, it’s an argument that’s perhaps gaining weight when you note that we’re halfway into the run and certain characters have had paper-thin development and just the occasional scene. It’s Walsh that’s so far delivering the most, ironic if he’s the one-season companion that certain rumours suggest.

Halfway in and it seems clear that the new era of Doctor Who has deliberately veered away from the over-intricacies of the Moffat era into broad-stroke, family-friendly romps that feel like certain moments of the Peter Davison era  but it’s not clear if – the Rosa episode excluded – the run will bring any weightier issues or not. Next week’s Punjab-based episode will hopefully give Yaz some much-needed developlent, at least… so there’s little chance of being almost fatally hurt and randomly picked up by a passing space-ship  for a third time. 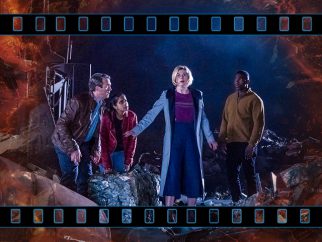