The Netflix film 'Hold the Dark' is beautifully shot and savagely rendered but perhaps too enigmatic for its own good....

Medora Slone (Riley Keogh) watches her son Bailey, playing in the snow outside their Alaskan cabin and notices a wolf at the edge of the property. When she returns from her cellar, there’s no sign of the infant and it appears that her son is the third child to be snatched by a pack of wolves that live in the hinterland of the mountains.

Russell Core (Jeffrey Wright) , a renown animal behaviorist and writer is contacted by Medora who asks him to come and hunt the wolf. She is aware her son is probably dead, but she needs some sort of closure and retribution before her husband Vernon (Alexander Skarsgård) arrives home from war.  Seeing the trip as an opportunity to also visit his estranged daughter in Anchorage afterwards, Core accepts Slone’s plea, but while staying at the Slone home becomes concerned for Medora’s well-being. As he seeks to track the nearby pack a disturbing and more sinister truth become apparent.

Vernon, no stranger to violence and the call of something wild and primal, is sent home after being injured on the battlefield and quickly sets off in a pursuit of his own type of bloody retribution – one that puts him on a collision course with Core, local law-enforcers and anyone who gets in his way…

With films such as Blue Ruin and Green Room, writer/director Jeremy Sauliner has been making an impression as one of the key young talents to watch out for – often bringing a sense of deep colour and uncomfortable, visceral danger to his stories.  So it should be no surprise that Hold the Dark, his adaptation of William Giraldi’s book of the same name, hits some of those beats and plays to his reliable strengths.  Like other recent films such as Wind River, it’s a film that marries a story of violence and mystery that is both human and environmental – but in this case with far more brutally and executed far less forgivingly.

Undeniably beautiful in its cinematography and sense of movement – both natural and structural – the film clearly shows Sauliner’s skills and those of his ensemble. There are moments during Hold the Dark where the film shoots for truly classic status on more than one level – a long, savagely rendered massacre-level shoot-out that coldly rivals greats such as HEAT for the sheer firepower and investment you have in the scene and which holds you far longer than most disposable Hollywood fare; the outlier factor nipping at civilised society is reminiscent of Near Dark and the cold Alaskan days and nights recall the Al Pacino/ Robin Williams thriller Insomnia.  On another basic  level, there’s a sustained brooding atmosphere that largely remains effective, an organic sense of real terror that comes from simply being on the fringes between civilisaiton and the wilderness. The wolf motif is important to both the imagery and words and the parallels between the human society and the canine hierarchy are the pivot of the piece.

The catch is that for all the promise the film seems to build towards…the interesting parts don’t quite come together at the end and it becomes like an intricate time-piece – one that is marvelous to watch as it ticks away with all the menace of a detonator but then which simply winds down to a disturbingly askew quiet that leaves you to marvel at the cogs, wheels, levers and teeth before you but at something which is now little more than a beautiful-looking paperweight unsuitable for purpose.  It’s one thing to be enigmatic and to leave some elements to the opinion of the viewer, but it’s another  to use that as a reason to lack a coherent ending. Those looking for something definitive may well be disappointed by a climax that is heavy on travelogue beauty but light on real resolution.

Jeffrey Wright has come a long way since his breakthrough as young artist Basquiat over twenty years ago and is now more familiar as Bernard in the acclaimed HBO reboot of Westworld and in roles often that ask him to play older than his 53 years. Here he’s even more bothered, bewildered and bewhiskered here as a writer and animal expert, an effective hunter by default than by desire, largely wrapped up in layers of clothing against an unforgiving environment. Alexander Skarsgård lets his actions speak louder than words, but he cuts an imposing, almost mythical figure as he carves his way across the domestic and foreign landscapes with purpose. Keogh makes the most of her few scenes, a haunted figure with a past and complicated relationship that is hinted at here less explicitly than it is in the book. The often under-appreciated  James Badge Dale is good as Donald Marium, the local sheriff, desperately aware of the tinderbox that has been lit and Julian Black Antelope cuts an imposing presence as Cheeon, one of Vernon’s only real allies.

Slow-paced, but self-assured, Hold the Dark will please and frustrate in equal numbers  – there’s great performances, excellent mood and ambitious execution in this tale of lupine longing, but undeniably it’s also two hours of mood and menace without the needed release. It will do much to solidify Sauliner’s reputation as a director and hints of true greatness to come if the right project comes his way. Until then he is pencilled in to direct the third season of True Detective, which is a match made in heaven – or hell, whichever has the best tracking shots… 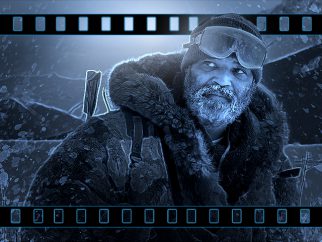