Rogues vs. Wade: ‘I am Vengeance’ comes to VOD…

John Gold (Stu Bennett) is an ex-soldier turned mercenary, the kind with a strong moral code but no problem with breaking the rules to get the job done. When returning from a rescue mission abroad, he learns that his old friend, Daniel Mason, has been murdered. It turns out Daniel’s mother and father have also been killed but Mason Snr.’s execution has been caught on audio-tape and so Gold heads to the rural town of Devotion to pay his respects and get some answers.

The Masons may have been popular residents, but the townspeople of Devotion seem less inclined to help John, especially when his presence draws the attention of a group of ex-military soldiers who have set up shop at a local warehouse. They  are led by a man called hatcher (Gary Daniels) and have cornered the local drugs market and Daniel’s murder seems linked to their shady enterprises.

But if Gold can’t find some reliable friends to help him take down the rogue unit, his mission of vengeance may be cut short…

Watching Vengeance (I am Vengeance in some territories to avoid confusion with a certain Nic Cage outing)  is like catching a classic testosterone-fuelled episode of The Sweeney or The Professionals – a familiar story of hard men exchanging hard punches, stripped down to basics with a well-worn formula, pounding soundtrack and dastardly rogue’s gallery… but one to which everyone involved commits themselves thoroughly. While the limited budget might have precluded a larger-scale cinematic run, there’s all the hallmarks of a competent and well-executed DVD or television movie experience for fans of the homemade action genre.

Stu Bennett, aka WWE fighter Wade Barrett, takes the central role of John Gold and gives the required  ‘man of few words’ character enough of an imposing frame and glare that the sparse script doesn’t matter too much. Veteran martial-artist Gary Daniels has less to do for the majority of the film, essentially a mercenary leader who barks orders and is held in reserve until the climax – when he unleashes some of the talent we’ve seen in films over the years as diverse as Fist of the NorthStar, Payday, Tekken and The Expendables. Harry Potter and Hollyoaks actor Anna Shaffer alternates the line between endearing and annoying as vapid vaper and local girl Sandra, not exactly the brightest junkie in the rural retreat. Keith Allen literally gets to phone in his performance as the late ‘Dougie Mason’, Gold’s previous employer who met an unfortunate end at the hands and guns of our bad guys but thoughtfully left some messages and Dictaphone recordings to guide John on his quest for vengeance.

One of the stumbling blocks in such movies is that everyone is often a bargain basement Bruce Lee with the moves to match. So, one of the strengths in Vengeance is that a majority of the fight sequences are of the more visceral, bare-knuckle variety. Yes, there’s some gunplay and most of the characters are the requisite special-forces veterans with battle training that are a fixture of such revenge yarns, but there’s only a few action ‘poses’ in the mix, more of a tendency to exchange choreographed but still solid body blows rather than wirework jumps and spins and that in itself is a refreshing change. This may not be the vehicle to ultimately launch Bennett to stardom, but it plays to his strengths.

Those looking for Hollywood levels of action and derring do may have to curb their expectations accordingly – this is Expendables on an EastEnders budget, a Who Dares Buys the Next Round, if you will- but director Ross Boyask (fast becoming a director and significant industry-name in grass-roots British film production) and his ensemble deliver exactly what they promise on the resources they have and there’s enough potential there that a sequel, with no less than Vinnie Jones joining the mix, is already before the cameras.

You can purchase and download the film via the following UK platforms: 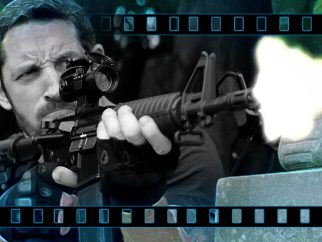