TV's latest brainstorming heroes know how to machine-code as well as machine-gun...

Jack Ryan (John Krasinski) once served on the frontline of the war on terror but the soldier-turned-CIA analyst knows that there’s as much value in tracing money transactions as there is in sending drones into combat – and he’s sure that the financial trail he’s been following indicates not just the rise of a major terrorist named ‘Sulieman’ who could rival Bin Laden but also the first mutterings of a large-scale atrocity being planned against the West. Eager but not always subtle or erudite, Ryan’s case may have merit but his bosses need more convincing, especially newly demoted James Greer (Wendell Pierce) who knows a miscalculation can have life and career-ending consequences.

When it appears that Jack’s theory is correct, the analyst finds himself whisked back to the front-line and part of a task-force that is still chasing shadows.  As Sulieman continues to build his powerbase, the anti-terrorism team will need every bit of Ryan’s intuition and the team’s globe-hopping firepower to stop  a further outrage…

While he doesn’t quite have the same amount of history, it’s entirely possible that Jack Ryan has as many personas as James Bond… and the latest version is on the small screen  – courtesy of Amazon Prime – rather than the previous multiplex stories, though it certainly feels widescreen.

The initial episode of the first eight-episode season (already renewed for a second run) is decent and does everything needed for a pilot to set out its stall: its remit, its story its characters and style are all there.  It’s entirely adequate. That’s not meant to sound like fairweather praise – it’s a difficult task that many a forgotten or lamented series has failed to accomplish or survive – it’s simply that while all the ingredients are there to enjoy, it’s all a little familiar. Glossy, expensive and slickly-managed though they are, we’ve seen a lot of this before – and not just because Jack Ryan himself has been seen in a multitude of big-screen forms – Baldwin, Ford, Affleck and Pine etc. 24, Homeland and most recently Condor have celebrated the importance of intelligence-gathering and data analysis and then married the more glamorous action alongside company intrigue and department politics (large and lowercase P as needed). In an era where mainstream real-life news and personalities often have a focus on glorifying short-term efforts and bravado, it’s a positive sign that on-screen adventures have noticeably pivoted from simple blow-things-up to more complex work-things out and that though the requisite gunfights and explosions are there a’plenty, the mind is being treated as a big an asset as the gun – in fiction at least. But just as with the more overt elements. it does lead to a formula that feels more like mix-and-match than truly original.

However, stick with it (we’re currently half way through) and the nuances begin to show themselves. There are some deft left-field touches in this particular mix. Wendell Pierce’s brusque, no-nonsense Greer (previously played by the likes of no less than James Earl Jones and Morgan Freeman) is a Muslim, though a non-practising and conflicted one who dislikes the extremes of both sides of any potential ‘holy war’. The leader of the French anti-terrorism squad Sandrine (Marie-Josée Croze) sagely notes the difference between Europe and America in the way they describe minorities and also in the way people date. The terrorist network uses online computer-gaming consoles to send messages  and the main terrorist threat Suleiman (Ali Suliman) is given a backstory that doesn’t excuse his subsequent actions but certainly explains the origins of his animosity and desire for retribution. Certainly, there’s some black and white aspects to the drama that provide the foundations and familiar punctuation, but there’s at least a decent and determined attempt to show the various shades of grey that exist for those genuinely trying to survive others’ agendas.

It’s easy to see where the budget went. Though Morocco stands in for several Middle Eastern locales, the production shot genuine on-location scenes in Washington, Paris and several parts of Canada with the choice of Amazon as a production platform allowing them to maximise the money and simultaneous shooting schedules. And it shows – in an age of savvy audiences, it takes ever better post-production special effects to deceive the viewer and it’s more satisfying when the backdrops are clearly in-situ.

John Krasinski’s credentials continue to climb and impress. To many American viewers he was the amiable Jim Halpert in the US version of The Office but in recent years he’s turned his hand to unexpectedly diverse projects. He directed (and starred alongside his wife Emily Blunt in) acclaimed genre film A Quiet Place and the choice for him to essay a new version of Jack Ryan is a savvy one – needing the mixture of an everyman in manner and capable action man in execution, one that he pulls off well even if he’s not the most interesting character in the mix. Pierce makes a good Greer, steering just within the lines of traditional ‘gruff-but-decent’ boss as even-senior Timothy Hutton makes the character’s life difficult. The female leads -Abbie Cornish as Cathy Mueller and Dina Shihabi as Hanin – continue to show it’s possible to have interesting characters beyond lazy love-interest credentials and they impress.

Jack Ryan‘s latest incarnation – created by Carlton Cuse (Lost, Bates Motel) and Graham Roland (Fringe, Almost Human) – may not push the boundaries of the modern spy-genre but it plays to its basic, established strengths. There’s certainly money and effort put in to the production and the result is certainly worth your time.

All episodes of ‘Tom Clancy’s Jack Ryan’ are now available on Amazon Prime. 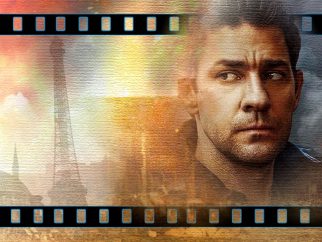