To ‘Infinity’ and Beyond. Marvel’s empire strikes back.

The canon roars: A decade of movies on and Marvel has built a true cinematic empire, capped off with Infinity War's opening salvo...

After watching his homeworld’s resources being incapable of supporting his civilisation the mad Titan, Thanos (James Brolin) came to the conclusion that only halving the universe’s population would ensure the survival of everyone left. Such reaping would not be swayed by money, power or position, he would see the deaths be completely random, but Thanos began to (literally) execute his plan without mercy.  His search for the six legendary Infinity Gems, created in the birthing fires of the universe and each with a control over specifics such as Time, Reality and Soul, brings him to Earth where many of the gems have taken the form of elements that previous Marvel Universe heroes have encountered.

But as the world’s mightiest heroes quickly realise, Thanos is unlike any ‘villain’ they’ve ever had to face – he is a creature driven by necessity and conviction, however insane his plan. As quickly as reunions happen, lives are torn apart as various battlefronts are created: from the streets of New York to the depths of space, from the fields of Wakanda to the cosmic forge of the gods, no single hero has the power to stop Thanos and his quest for omnipotence.  Even together, their combined forces look far inferior to a creature who can control time and space and not every hero will make it out alive…

There are some obvious brickbats and self-fulfilling cosmic prophecies that you can throw at Avengers: Infinity War before ever seeing a single frame: the fact that ‘boundary-pushing’ was always likely to refer to the stretching of the screen to accommodate almost every cinematic Marvel character  to date (rather than it being an industry game-change per se); that even a film that runs close to three hours can’t make room for every character without fielding certain favourites and that special effects were always likely to dominate proceedings with one set-piece after another.

And all of that is true of Marvel Studios‘ every-kind-of-flavour-and-icing birthday cake and the anniversary party it’s thrown for itself and the fans – with a tent big enough for all.

And yet it’s equally true to say that such criticisms and fair observations are somewhat moot. If you’re going to measure  the uber-est, mega-most pixel-popping action blockbuster against, say, Schindler’s List, the former will always falter in the face of the latter. But if you, more fairly, judge it against its action peers and keep your fingers crossed for something a smidgen more than just set-pieces, for some genuine moments of emotion, high stakes and adventure then one has to say that Infinity War embraces all such elements and very quickly shows that it could be one of the best pay-offs of empire-building that the action genre has produced. (Or, to be more accurate, the first half of such because anyone looking for a self-contained drama will have to wait until next year’s second half in a as-yet-in-named finale).

While DC‘s universe is fragmented and fractured by almost abstract nihilistic darkness and over-somber drama, Marvel‘s universe has felt like the shiny,well-oiled execution of Tetris-like plan with due care and attention to making even the most unlikely and disparate entries fit together relatively smoothly. Some of that is brilliant planning, some simply good luck, but somehow it doesn’t seem impossible that Spider-man, Guardians of the Galaxy and Doctor Strange could exist in the same universe, even if they own very different corners. Infinity War is proof positive of that often under-appreciated accomplishment, managing to bring the requisite sturm und drang and fist-fights and mix  it some interesting theology (Thanos is clearly mad on a cosmic genocidal level , but he’s undeniably put a great deal of time and consideration into his existential crisis. Unlike many a Big Bad, one could argue he cares too much.)

There’s so much going on in Infinity War’s galactic canvas that you do find yourself realising that you’ve barely been able to catch your breath – that you  left one climactic moment in the heart of battle to whiz across the universe to visit another battle-front with the danger of PTSD out-pacing your battle fatigue and nearly out-staying their welcome. (It’s a little like the superhero equivalent of those television advert that tells you to visit the doctor if the Viagra has swapped one problem for the opposite…) Though there’s a hokey danger in having the big bad villain being a purple galactic thug with a steroid-levelled cleft chin, Brolin, soon to be seen in another incoming Marvel-ish movie, Deadpool 2, brings Thanos to life, overcoming the performance-caption element and giving the alien a sense of misplaced nobility even when being a despot. Ironically, while previous entries such as Civil War put Downey Jnr.’s Iron Man / Tony Stark against Captain America, the two pillars of the Marvel Universe don’t share a single scene in Infinity War and it’s the case that for all this being a hero-fest, the troops are so spread-out, many others do not interact either.  But from the very first scene, the film puts its primary cast through the physical and emotional wringer with not everyone making it out the other side – and that could be the film’s inherent problem… that the sheer scale and potential breadth of the carnage and consequences  will mean that audiences will likely not be fully convinced that the sacrifices and tragedies will ultimately stick – though it’s fun to watch it all unfold as it happens. Indeed, it’s that very element that perhaps makes Marvel‘s cinematic universe such a successful recreation of its comic empire: necessary reboots and resets come with the territory.

Despite the ominous plans unfolding, there are truckloads of one-liners and pop-culture quips, most of which work even if there’s a sense of some snark-overload during certain scenes. That being said, even the moments of banter that do feel more ‘scripted’ and product-placed (such as the discussion about superhero flavours of ice-cream) are funny enough.  The directors, Joe and Anthony Russo, know the territory and keep things on a reasonably even, if kinetic keel, only pausing for an oil-change when absolutely necessary.

Will audiences put aside the insurmountable and unrealistic mountains of pure hype the film has received and kindly ignore the fact that the most powerful scene in the trailer  – with our collective heroes surging towards camera – might be great but isn’t in the film (and couldn’t have been be given the story structure)? Yes. This film will simply be judged on its fun factor alone. Infinity War is a great film for what it is – a somewhat scattershot and overstuffed universe-spanning romp destined to do as well on DVD this month as it did in cinemas over the summer. Far better than it could have been, but still largely a collection of set-pieces… like mashing together the best moments of six seasons of Game of Thrones into one episode and wondering why some of the scenes lack their original impact – mostly because the hours of other connective tissue is what earns those moments their power.  But while not perfect, one has to applaud Marvel Studios for its sheer sense of ambition and the execution of its blueprint  and for ensuring that, at least at the screening I originally attended, whole auditoriums are now willing to sit through the closing credits for a glimpse of the future – without a single person rising from their seat. And now it’s a home release, the seat is even comfier.

It’s a future, that Marvel is already hard at work on rebuilding… 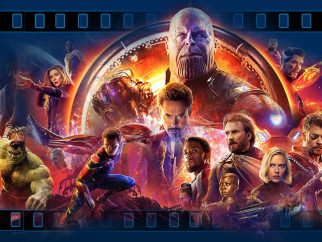