Apocalypse, Meh: ‘How it Ends’ is a road to nowhere…

Are we there yet? Out of gas 'How it Ends' presents a Post-Traumatic Travelogue that has nothing new to offer...

Seattle-based Will (Theo James) and his fiancée Samantha  (Kat Graham) have just found out she’s expecting their baby. When Will is on a business trip to Chicago, he decides to visit Sam’s parents and formally tell them the couple are planning to get married. Sam’s mother (Nicole Ari Parker) is welcoming , but her father, Tom (Forest Whitaker) is a bristling ex-military type who has never really been impressed with Tom, especially since an unfortunate accident on Tom’s boat several years before. Though Tom and Will make an initial effort, the dinner ends badly and Will heads back to the airport hotel ready for the next day’s early flight home.

He’s awoken by a video-call from Sam telling him something bad is happening and then the call drops out. Then all flights are cancelled and it becomes impossible to contact anyone on the West Coast. With little choice, Will heads back to Tom’s place and Sam’s father announces he’s going to take the car and drive to Seattle – and if Tom is a real man who cares about Sam he’ll come too.

The two men set off but once they’ve left the confines of the city and managed to talk their way through a military road-block, their troubles are only just beginning. As panic sets in around them, the question becomes not what has happened to Sam and everyone else… but whether the two men will make it to Seattle alive…

While one can honestly applaud the sheer number of original movies that Netflix is producing – essentially feeling like SyFy‘s movie-of-the-week slate but with far better budgets and superior quality control on a technical level – there’s little doubt that there’s something of a mixed success rate.

Without revealing too much, one of the biggest (and ironic) problems with How it Ends is exactly that, closely followed by how it gets there. For a production that thinks ‘it’s the journey not the destination‘ it aimlessly emulates and ticks off all the familiar obstacles that fill  seasons of more episodic apocalyptic competition and after two packed-out but somehow plodding hours on a road trip to utter inconsequence, it just stops – as if the film suddenly ran out of either money, script-pages or perhaps just the sheer will to live.

It’s a pretty enough journey on the cinematography side: sunsets, rolling hills and burning vehicles always pop out from depth-of-field, but one has very little to offer in the way of surprises, a shopping list rather than a plot and it  can’t even muster basic explanations for its whole central premise. It initially wants to be vague about the nature of the west coast ‘event’ that kickstarts proceedings in an effort to be enigmatic and mysterious, keeping the audience as much in the dark as the main characters, but at some point it just becomes annoyingly avoided. ‘Does it matter?‘ muses Will too late in the game and the audience frowns and insists that really, it actually does… especially if they’ve invested the time to find out.  The idea of whether this is an alien attack, a natural disaster or man-made catastrophe is sprinkled into snatches of radio reports and redneck chatter that Will and Tom encounter en route but the film resolutely refuses to offer anything else. Almost every possible explanation makes no real sense in the wake of other factors and in the end you may not care either, but neither do you then care about the people facing it.

It’s possible that all that lack of background could have been excusable if serious consideration and execution had been given to studying how fragile civilisation is when suddenly robbed of its wider communication (because, when my internet goes down, I fully admit I gets the panics after mere minutes). Rumours, desperation, kindness and pragmatism are all elements of the human condition that rear their head in an emergency and are ripe for good drama. But instead of mining such veins in any decent way, How it Ends  prefers to scatter a few weathered tropes into the drive – duplicitous hijackers, distrusting law-officers and psychopathic Mad Max wannabees who apparently turned feral after missing a handful of brunches.  Supposedly taking place over only five days, the script doesn’t evolve, it just pushes forward like a driverless car running on fumes and on a downhill slope. It  makes the characters of Will and  Tom act according to what’s needed in each act, including vague masculine bonding and bursts of bullets and testosterone,e but can’t even deliver a climax to punctuate its title. ‘Are we there yet?‘ is the eternal question we’re yelling from the back-seat only to be disappointed.  If ever there was a poster-child for the ‘We’re making this up as we go along and we just ran out of ideas, so let’s roll the credits!‘ then this is it.

Forest Whitaker is one of those actors whose inclusion largely improves anything he’s in and How it Ends is no exception. Strictly grading on a curve, he’s the best thing here, though he’s really only required to be a template over-protective father and something of a physical bully (he’s apparently an ex-military bad-ass in the same way that Bruce Willis is in every other DVD release. ie: he gets to be a dick to everyone). British actor Theo James (Bedlam, the Divergent films) has a reasonable American accent but the story can’t decide how to frame anything about him. A high-flying legal job is noted but never explained and the story can’t decide if he’s a budding action hero or just feckless and lucky. The supporting characters are little more than sketched-out additions who offer little depth or insight from the handful of lines they are offered. Even the ones who look to be major players fizzle out. It’s hard to be asked to invest in them… The Walking Dead has a tendency to ruthlessly cull its characters, but How it Ends merely loses them as they carelessly wander off camera never to be seen again…

How it begins is promising, but How it Ends ultimately proves flat, pointless and uninspired. 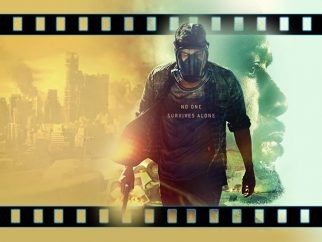 New Doctor Who tease: It’s about (half) time…