Fallen Kingdom: Talking about a Devolution…

Box-office be damned - Creatively, 'Jurassic World: Fallen Kingdom' could well be the extinction-level event for a once ground-breaking film franchise....

The island of Isla Nubar is about to be destroyed by volcanic activity and despite pressure to save the surviving dinosaurs, the world seems to have decided that nature is putting right what man got wrong and that the creatures will be allowed to perish.  That sits perfectly well with the likes of chaos theory specialist Ian Malcolm (Jeff Goldblum) but less so with the likes of Claire Dearing (Bryce Dallas Howard), who has somehow avoided legal culpability / scapegoating for the most recent disaster and joined with other environmentalists in an effort to keep the dinosaurs contained but alive.

However she and the dinosaurs are given an unofficial lifeline by the estate of Benjamin Lockwood (James Cromwell) who helped original entrepreneur John Hammond set up the Park. He has his own land where he insists he can secretly transplant some of the creatures.  They will need Dearing to travel with them and input her island all-access credentials to which she quickly agrees. One of the creatures most of interest is the raptor that Owen Grady (Chris Pratt) managed to train and despite the fact that Grady and Dearing are no longer ‘an item’ she enlists his reluctant help to accompany her and her team back to the island.

However it soon becomes clear that Lockwood’s representatives may not have been completely honest – Eli Mills (Rafe Spall) and mercenary Ken Wheatley (Ted Levine) clearly have a different agenda, one driven by the financial benefits of selling bio-engineered predators to the highest bidder.  The Lockwood team are determined to save as many dinosaurs as possible… but are less bothered about the humans…

There was a jaw-dropping awe to the ambition of the first Jurassic Park film, our first chance to glimpse prehistoric beasts that looked real, massive and actually dangerous. The story-beats might not have pushed boundaries but the presentation most definitely did, with the same sense of a leap-forward that Harry Harryhausen’s stop-motion talents had decades before. Spielberg populated his tale with not only the expected human characters (whiskery old-man, smart kids and world-weary scientists, etc) but a genuine, knowing wide-eyed  wonder, realising he had to achieve a balance that would leave audiences remembering both the impact of both a T-Rex on a rampage and a simple glass of water vibrating. He gave the skyscraping brontosaurus, the hungry T-Rex and introduced us to Velociraptors, an adversary of crocodile cunning and bird-like agility. It was a masterclass in mainstream movie-making. But evolution and technology can be a fickle things and over twenty years later, inferior dinosaur movies now litter the bargain bins, cable channels and iPhone apps and have all the *yawn* allure of a sand-covered fractured mandible… with Hollywood’s presumption that what’s needed in a survival of the fittest and better box-office is simply making the dinosaurs bigger *snore* and giving them quirky names and personalities *sigh*.

The modern blockbuster is often built around a central and very basic ‘wouldn’t it be cool?‘ concept that requires a certain suspension of disbelief. That can work to varying degrees of success. Say what you want about the number (and quality) of superhero movies out there in recent times, but Marvel spent a decade carefully building their brand and ultimately paying off their plot-points….The latest film  in the Jurassic Park, now known as Jurassic World: Fallen Kingdom, could have married its dinosaur legacy with an interesting take on ecology and man’s decisions and responsibilities to police and protect its creations versus the opportunity to use them as weapons of war. It’s the talking point that sets everything up and proceeds to be discussed for a few minutes before being dropped like a lava-temperature hot potato in favour of pantomime plotting. Infinity War is almost biblical when compared to Fallen Kingdom, essentially the equivalent of a hurried doodle on a napkin during a ten minute merchandising meeting, one where ‘running’, ‘shouting’ and ‘cloning’ sounded all kinds of cool buzz words to fridge-magnet into a script, but dotting Is and crossing Ts in the plain logic department sounded far too technical for everyone involved. It’s sheer good luck that no-one insisted on a Burger King tie-in opportunity that belched: “Bigger… Longer… Hungrier….and came with ‘heroic’  Happy meal ‘Blue the friendly raptor’ action figure…’

Man, there’s never a good asteroid around when you need it.

Instead of having a heart-racing journey of survival through menacing jungles, Fallen Kingdom, the latest chaptergives us a prehysterical Scooby Doo-styled entry that doesn’t even pretend to try. One doesn’t expect scientific accuracy or Academy Award monologues from such a summer tent-pole, but it would be nice to feel someone had seen it as more than a cash cowasarus. Half of the movie retreads all the better beats of previous entries on the island itself (before blowing it all up) and then in an unfathomable screech of brakes, pivots into a stately home setting in a string of set-pieces with more cartoon-level logic. Different, yes. Advisable, no. Director J A Bayona gives a few inventive moments with some interesting uses of perspective and movement (mainly in the opening moments) but he’s struggling with material that’s geared to stage-direction rather than plot. Such CGI-heavy projects require spectacle and can sometimes rely on such to paper over the cracks – but it’s telling that familiar running and shouting aside, there’s little to excite and amaze here any more. Two of the most promising scenes from the trailer (a submerged monster about to emerge through the waves to snack on some surfers and a T-Rex having a roar-off with a lion) turn out to be literally seconds-long parts of an epilogue montage that has almost nothing to do with the main plot – the ultimate case of bite and switch.

This is a film where the film’s writers Colin Trevorrow (the previous chapter’s director) and Derek Connolly make characters and creatures do whatever services the individual scene rather than the story: where the bad guys don’t even notice the good guys careering onto their ship in full view, where lava fails to burn you even when it’s inches away and where secret passages lead to underground caverns and storage facilities under country estates that would make Bruce Wayne weep… and a 100 tonne dinosaur sneaks around the corridors of an old house before chasing its quarry across sloping rooftops and skylights. No. Seriously.

Fallen Kingdom‘s cast universally tread water and sheepishly cash the cheque. Chris Pratt has a certain screen presence and does a fine line in self-deprecating humour but this is distinctly ‘Star Lord’ light: a few zingers, a smirk and racing around firing at CGI threats are supposed to make the ladies swoon, but instead point to the ‘it’s a good job you’re pretty‘ limitations of the characters he’s consistently being asked to play.  Equally, Bryce Dallas Howard had a compelling career as  a serious actress in the making, but recent entries have hardly done her any favours and the only wise choice in returning to the role of ex-Park co-ordinator Claire Dearing is that this time she’s not trying to outrun danger in high-heels.  Veteran James Cromwell replaces the late Sir Richard Attenborough as a previously unmentioned collaborator in the early stages of bringing the dinos back, but in a role that promises far more than it delivers. Ted Levine (Monk, The Alienist) plays  big game hunter Ken Wheatley with such snarling lack of subtlety that it makes one miss the more nuanced Bob Peck and Pete Postlethwaite even more, though it’s a triumph compared to Toby Jones’ evil auctioneer Gunnar Eversol, who’d have got away with it if it wasn’t for those meddling kids.  Jeff Goldblum pointlessly cameos to book-end the story but seems to have forgotten he’s supposed to be reprising chaos-theory specialist Ian Malcolm rather than himself.

All that being said, Fallen Kingdom is just about acceptable as a turn-your-brain-off romp. It has enjoyed impressive box-office returns since its global debut around 6th June (a roll-out that will only increase when it finally makes land-fall in the US on 22nd June – weeks behind everyone else, even South Korea) and which may persuade the powers-that-be that despite everything else, the franchise is still on the right track.  But it’s hard to think that the film hasn’t reached some sort of natural dead end, a cul-de-sac of creativity now merely set on a raptor-like rinse and repeat cycle. Perhaps there’s an R-rated monster flick in the series’ future – one that could genuinely restore the menace and tension beyond the set-pieces, but that’s really the only evolution that the tired Jurassic Park franchise has left to play because at this point, dinosaurs seem truly dated. 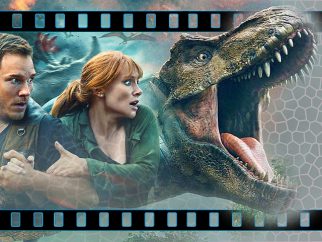