Steven Soderbergh's latest mines that dramatic minefield of paranoia: are 'they' out to get you or not?

Sawyer Valentini (Claire Foy) has recently moved to the big city and though she’s good at her day job as a financial analyst. But she seems to be a numbers person not a people person and despite her best efforts, her personal life is a brittle disaster. We learn that she’s attempting to rectify a past trauma, through self-medication, unwise Tinder dates and actual therapy with Sawyer explaining that her move was the result of having a particularly unpleasant and persistent stalker called David Strine (Josh Leonard) after being a professional-carer for his ill father.

She’s asked during one session about how badly the stalking has affected her and Sawyer admits there were times when it had got bad that she’d contemplated suicide rather than just a move.  To her surprise, when she attempts to sign out of the psychiatric clinic she’s visiting, she discovers that those admissions of potential self-harm have led to a twenty-four hour observation order and that she’s not allowed to leave.  At first it seems like a bureaucratic snafu but the next twenty-four hours prove to be a nightmare of red-tape and bad choices, with Sawyer questioning herself and others.

And then when it comes time to take her pills, she looks at the clinic’s orderly and sees David Strine…

The problem with Unsane is not with its central idea. It’s an effective movie that is based on a tried-and-tested conceit (of a person locked up and making claims that they shouldn’t be – without people apparently believing them) and has strong performances throughout, especially from Claire Foy on whose shoulders the movie largely rises and falls. Indeed it truly appears to be Foy’s year with noticeable and diverse roles coming up as she essays a new version of Elizazeth Salander in The Girl who kicked over the Hornets  Nest and appears as Neil Armstrong’s wife in The First Man,  both due out later this year. It’s simply that, being a Steven Soderbergh production, Unsane  – from its very title onwards – seems to be setting up its stall, determined not to follow any set pattern or traditional cookie cutter formula in the way it tells that tale . The director/writer is known for producing material that feels improvised, realistic and even mundane but with something askew and those are credentials that should work in Unsane‘s favour.

But the pacing proves inconsistent – almost as if it’s trying TOO hard not to be conventional and then needing to make several sharp course corrections less it lose us.  The ‘Is she imagining everything?‘ aspect works well before that is largely answered earlier than expected, the film dealing with the consequences to Sawyer and those around her. Subsequently the film wobbles between psychological thriller and social commentary with an added idictment of an opportunistic healthcare/insurance monopoly in which cracks and mental health can be exploited for profit as well as dramatic effect.

At the start of the film, there’s an avalanche of elements that contribute to the central dilemma. Sawyer is abrasive and clearly troubled, showing one face to her work colleagues, another to the efforts she’s making to have a personal life. The clinic she visits doesn’t have the checks and balances it really should and Sawyer doesn’t read the paperwork well enough (a warning about small-print, if ever there was one) and violent encounters within the system during her stay could be symptoms or side-effects of her situation, ultimately leading to a deeper hole to climb out of. For that first-half  it taps in to that common paranoia of the system either failing you or being actively out to get you – the idea that everything you’re watching is horrifyingly plausible. But as the story progresses, there are some leaps of logic and convenience that work less well – story elements that only work to extend the plot rather than strengthen it and there’s every chance you’ll find yourself asking why people aren’t asking the questions you are. Foy plays Sawyer as her own worst enemy, a character you wouldn’t really want to be friends with and as a character who normally  doesn’t care about that. Every so often she’ll see the problems of living a solitary lifestyle, but she’s consistently walking that tightrope between arrogance and genuine PTSD. She has the kind of smarts that can work as a advantage and disadvantage.

Josh Leonard, whose acting career debut The Blair Witch Project was a memorable calling-card. plays orderly David Strine as someone who appears to be creepy from the outset, though it’s initially unclear if we’re seeing it through Swayer’s perceptions rather than reality. Saturday Night Live‘s Jay Pharoah is also impressive as fellow inmate who may or may not be Sawyer’ only friend in the ward and the normal narcotic-nymphette-like Juno Temple gives the audience her usual otherworldly lilt, but with a more nasty and grungy turn this time around.  Amy Irving, in a relatively rare big screen appearance, essays Sawyer’s mother, mostly on the outside looking in.

Impressively Soderbergh shot a majority of the film on iPhones in less than two weeks and though there’s certainly a touch of cinema verite to proceedings it’s remarkable how good the film looks for a majority of the time, the format feeding into the up-close-and-personal aspect of the story rather than being the distraction it could have been.

Unsane has a lot of potential, some of which it lives up to: looking at the way Big Pharma works, how the mentally ill are cared for and how women are sometimes spoken ‘at’ rather than ‘to’ – but after a while the central story drags the viewer along rather than pulling them in, not quite sure where it wants to eventually land. Shortened and reined in just a little, it might have made an interesting Black Mirror entry in that anthology series, but the feature film route shows its strengths and weaknesses. It’s a notable achievement on a production-level, slightly less so on a creative one. 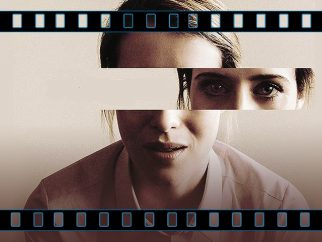