All 'brand', nothing new... the latest Lara Croft outing clings to ledges and nostalgia but can't dig up any surprises...

Lara Croft grew up on a vast estate with all the benefits that could offer – except a father who was consistently off on business-trips in the four corners of the world.  Seven years ago, Richard Croft (Samuel West) vanished on such an expedition and the young woman Lara has become (Alicia Vikander) is determined to find her own way in life rather than taking over the reins of the company and accepting his financial legacy – an act she believes would formally and emotionally accept he is gone forever.  But finally preparing to accept the mantle, she unearths a clue that suggests her father’s apparent demise may not have been all it seemed… and a video’d warning from Croft Snr. to destroy his research.

Ignoring his instructions and giving up her job as a street courier in London, she raises enough of her own money to head East to follow in his footsteps, but her journey is about to hit stormy waters, literally. As she and Lu Ren (Daniel Wu) the son of Richard Croft’s boat captain find themselves trapped on an ancient island, the true nature of a long-last treasure and the very real threat it may prove to humanity are revealed. Now Lara must face a series of challenges that will test her physically and emotionally… with the fate of the world at stake and a series of people wanting to control her every move…

Whatever you think of the finished film, the famous game itself or the actual decision for it to be made into a film at all, one cannot deny that the coupling of rising star Angelina Jolie and Tomb Raider, back in the heady, carefree days of 2001, was a partnership made in new millennium marketing heaven: a striking actress, capably fit and willing to throw herself into a pneumatic tongue-in-cheek romp based on a hugely successful brand was just what the doctor, joystick and adolescent boys ordered – with just the right amount of self-aware grrrrrrl-power to level it out. That it wasn’t wholly a critical success may be moot. The film and its inevitable sequel made enough money for everyone to be happy, even if not to continue the franchise beyond that. It also helped solidify Jolie as a force to be reckoned with.

In theory the 2018 ‘reinvention’ of Lara Croft has everything going for it.  The gaming empire is an ever-growing billions-dollar industry that continues to go from strength to strength (though Croft herself might be in danger of becoming an elder statesman, the Tomb Raider brand eclipsed by other pixelated ingenues) and Hollywood’s console/computer game-adaptations are still a viable if not hugely respected brand.  Sprinkle some pragmatic casting (Oscar nominee Alicia Vikander as Lara, Dominic West as her father, Walton Goggins as a boo-hiss villain, respected Asian actor Daniel Wu as a reluctant sidekick and cameo support from the likes of Derek Jacobi, Kristin Scott Thomas and even Nick Frost) and – on paper at least – you have the makings of a decent enterprise.

It’s a shame then, if not wholly unexpected, that this Tomb Raider  has absolutely nothing new to offer and races around merely pillaging the game and past glories and giving the merest lip-service to story. From an early mismanaged promotional campaign (with photoshop work so bad it made Vikander’s neck look like a brontosaurus) to a largely undersold push on its cinema release, the film lacked the confidence it so desperately needed. Directed by Roar Uthang (The Wave), the movie resolutely fails to live up to the director’s name, producing a few meows, a handful of snarls and a hairball of a so-called plot.

Lara is her own worst enemy  – the character and the script placing artificial obstacles in her path for no discernable reason other than needing set-pieces. Yes, we know, it’s a game-adaptation so we expect a certain kind of template and ‘levelling up’ of each ‘Act’ and that would be fine and dandy if the internal logic of the piece supported them, but frequently it doesn’t even manage that and simply lifts the viewer out of the experience. For example, at one point Lara refuses to sign on to take over her father’s sprawling company as it would be a taciturn acceptance of his death rather than absence. That might work on an emotional level, but when – mere minutes later – she reluctantly pawns off the treasured necklace her father gave her to raise for funds for her expedition, my wife and I were simultaneously shouting at the screen. (“You won’t accept access to a multi-million dollar bank-account because of daddy issues, but you’ll sell a prized possession he gave you for a few thousand?“). On another occasion she destroys a bridge she needs to cross (and to stop her enemy crossing) without crossing it herself first. There’s a metaphor for this whole experience in there somewhere and you don’t have to spend long excavating the debris to find it.

Sweden-born Vikander has already proven her screen presence in far more effective and meatier roles in the likes of the unsettling Ex Machina and The Danish Girl as well as mainstream fare such as The Man from UNCLE and Jason Bourne. But Tomb Raider is her first major ‘above the title’ lead and is clearly a move her agent recommended for the exposure rather than the script. She is fine in a part that does little more than require her to jump, sweat and frown and (to her credit) work out in the gym for six months. If Jolie’s version projected unapologetic sexiness, Vikander is more subtle in a film that requires every other element to be turned up to 11 and that means she is propelled along rather than creating the momentum herself.  American actor Wu has made a huge impact in Asian cinema and has been making a name for himself in highly-kinetic international productions such as Into the Badlands but Tomb Raider bizarrely does almost nothing with his talents, essentially giving him a rifle and telling him to point it off camera a few times. Goggins, a lovely guy in real-life , has made a screen career out of despicable low-life villains but he’s merely required to threaten and sneer as a middle-management mercenary looking for ancient glories – more Dick Dastardly than nasty nazi. A bedraggled West, so much better in almost everything he’s ever done, unapologetically cashes the check and delivers a one-note sorry/not sorry absentee father role and everyone else gets a few zingers to hurl around like arrows without much impact.

Vikander zips around pleasingly, avoiding the bullets, slings and arrows of outrageous misfortune and the CGI is fine because it has to be: passably executed with wide jungle vistas, crumbling backdrops and suitably bottomless caverns but, again, offering nothing really new to the eye. The cinematography starts off promisingly with a speedy bike race through London’s streets and alleys and then a chase across the boats and platforms of Hong Kong harbour, but eventually ends up a slave to the green-screen and wire-work that define most of the film’s second half.

Tomb Raider 2018 clearly has aspirations to not just be the Tomb Raider for a new generation, but also to emulate Raiders of the Lost Ark (count the ‘homages’ / grave robbing) but it ends up as something far more simplistic and by-the-pixels. Those who bemoan the rise of the superhero film will likely have to admit they are Shakespearian compared to the lack of ambition of this entry, scuppered by the familiar dilemma that the innate appeal of the computer-game is in controlling fates and here you have to sit back and watch someone else play – badly. It will pass nearly two hours of your time without offending but like the game format that inspired it, your home system’s ‘pause’ button is useful to punctuate proceedings…

Tomb Raider is released onto DVD on 12th June in the US and on 16th July in the UK. 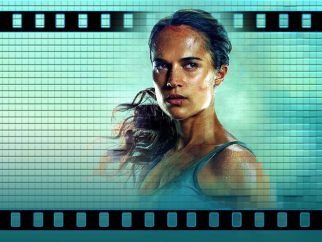