Forced to take the throne after the assassination of his father (during Captain America: Civil War), T’Challa (Chadwick Boseman) has the hard task of balancing the outward world’s view of Wakanda, with the secret that his country is far more advanced than anyone realises. The country’s rich source of vibranium has allowed it to surge forward in all sorts of technology but tradition has meant that it has always avoided direct involvement in the wars and agendas of the outside world.

But that may have to change when the immoral mercenary Ulysses Klaue (Andy Serkis) manages to obtain some of the secret vibranium and readies to sell it to the highest bidder in the outside world.  That factor alone might make times tough enough for new king  T’Challa but at the same time a darker family secret rears its head throwing the country’s monarchy into chaos.

There are those who want Wakanda to finally take a lead in world events, avenging years of the continent’s pillaging by the rest of the world. But the rise or fall of Wakanda may come at at a heavy cost…

There’s been a groundswell of interest and support in Marvel‘s Black Panther as its release date drew ever nearer and now at the box-office it’s easy to see why. The film, somewhat against the odds, manages to balance a plethora of elements that often sink less finely-tuned enterprises.  While it’s not a genuine game-changer per se, it is something that looks at the rule-book and decides that there’s plenty of ingredients still to be effectively mixed within those boundaries.

There’s a fine needle to thread when it comes to ‘black’ culture in the movies. Firstly, that in itself is a sweeping description of sometimes vastly diverse outlooks with differing ideas about how much history plays an influence on the future. Too broad – geographically and metaphorically – and there’s a resulting generalisation that can be lazy and offensive; too specific and it can cater for a small sub-section without having the ability to appeal beyond that. Black Panther‘s predominantly black cast – the notable exceptions being Andy Serkis as Klaue and Martin Freeman’s CIA Agent Ross – means the skin pigmentation is as important or unimportant as you choose to perceive it.

But undeniably, Black Panther is one of the first Marvel films in quite some time to push at the edges of the established cultural template and have its own unique identity. One would have to look to Marvel‘s initial salvo, Iron Man for such a ‘franchise-framed’ film standing on its own merits. Yes, there are references and touchstones that link it to the wider universe of superheroics, but for the most part it’s a self-contained story – or at least a story about self-containment and the pros and cons of such a policy. Wakanda may be a fictional creation, a isolationist country with an outwardly simple appearance hiding a deep and secret history,  but the film never makes the mistake of making it feel like just any other metropolis. Too many films inflict mix-and match collateral damage on their backdrops, but at no point could the busting streets or wide-open plains be mistaken for New York, Los Angeles, London or even the Mid-West plains. Indeed, not since The Lion King has a mainstream Hollywood blockbuster story managed to balance wide audience enjoyment with a production that so proudly displays its African heritage, even if the detail is admittedly an embroidered artifice for storytelling.

Race might be a talking point, but women feature incredibly strongly here, part of the film’s very genetic make-up and perhaps the strongest female roll-call in recent memory – even taking Wonder Woman into account. The title may be the masculine leader of the country, but it’s made clear throughout that his largely female ensemble are empowered on all fronts. T’Challa’s team includes  Danai Gurira (The Walking Dead‘s Michonne), Oscar-winning Lupita Nyong’o, Letitia Wright (Black Mirror and the upcoming Ready Player One) and veteran Angela Bassett. Each of their characters are individually strong and resilient and not the throwaway love-intrests and cannon-fodder found in far too many releases.

There’s a mixture of big set-pieces and big questions. There are plenty of special-effects and fisticuffs for the average superhero fan, but one doesn’t have to scratch far beneath the surface for messages on national and international responsibility. Amid the plentiful explosions and acrobatics, there are decent points made on both sides of the isolationist agenda – the moral and the pragmatic results of opening up borders to share, trade and reciprocation. At one point T’Challa notes that it’s often far too easy to build barriers than bridges, the most thinly-veiled metaphor for some real-life foreign policies.

Black Panther‘s opening box-office – which came in significantly above even the best predictions – showed that an ever-savvy Marvel can actively play to its established strengths while at least giving the appearance of tilting towards new windmills… and validating their decision to devote a sizeable chunk of Infinity War to Wakanda. One could argue there’s a sleight of hand and in some real respects the film is still your average redemption story – yes, narratively there are few surprises and many of the beats remain predictable – but it’s laid out with attention to detail and a sense of  skillful, deliberate world-building that must have the far inferior and scattershot DC/Warner universe-makers  breaking out in a cold sweat. 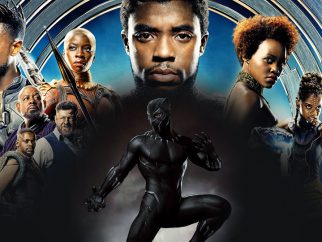 Seann William Scott will be new ‘Weapon’ of choice…