There's no doubt the dialogue is as sharp as the cards, but Aaron Sorkin's directorial debut molly-coddles its 'heroine'...

In the middle of the night Molly Bloom (Jessica Chastain) gets a phone-call that will change her life. It’s the FBI, they are outside her door, armed and they have a warrant for her arrest. Molly, once a ski-champion with realistic Olympic dreams, found her life going off on a different tangent and  has been involved in running illicit poker games, often attended by the famous, rich and powerful.

Now the FBI want her to serve time and name names. Molly refuses and after a string of lawyers refuse to take her case, she finds herself in the office of Charlie Jaffey (Idris Elba) who initially seems just as reluctant. As lawyer and potential client explore the events that led up to the current court case, it’s clear that Molly’s uphill and downhill exploits have been a mixture of smart, stupid, good luck, bad luck and conflicting agendas.

Molly had the smarts to get into this game – does she have enough to survive it?

Writer/director Aaron Sorkin has long since proven himself the master of walk-and-talk, giving audiences a perfect blend of pace and pentameter as his ensemble casts spar with each other like well-read, ballistic teleprompters. Arnold, Bruce, Sly and Jean Damme have rocket-launchers and tanks but Sorkin’s heroes have a far better arsenal: words, snark and quotable citations.

Despite the undeniable gift of the (written) gab that have rightly made him the go-to guy for intelligent drama, not everyone loves Sorkin’s scripts and one of the  double-edged criticisms/plaudits comes from his ability to take people we should rightly hate  (or at least distrust) and plead their case, making us like them – sometimes despite ourselves. In real life, politicians are usually pictured – not without reason – as hypocrites and opportunists, yet the much-missed The West Wing gave us idealistic people who essentially used their powers for good, making their causes seem noble if not always without shade or flaw. In both Studio 60 on the Sunset Strip and The Newsroom, he made well-paid television hosts and news executives the valiant under-dogs, raging against the more corporate machines that employed them. The obvious question is usually whether Sorkin is honestly trying to convince us to reconsider our outlook or merely dazzle and distract us with dialogue.

Perhaps it shouldn’t be a total surprise, then, that for his big screen debut as a director, Sorkin picks another unlikely character to champion. The heroine of Molly’s Game is not so much a downtrodden damsel in distress but a high-flying organisier of poker games catering for drug-taking, whoring movers and shakers… and who now faces substantial jail-time for lack of cooperation when arrested. Despite already having written about some of her exploits in a book (with a few thinly-veiled aliases for her clients) she refuses to turn state’s evidence or provide further damning evidence because of a red-line on her ‘integrity’. Who then will save her?

Based on the exploits of real-life ex-Olympian skier Molly Bloom (her chances of a medal felled –  and her life re-directed by – an errant pine twig during a qualifying competition)  Sorkin sets about humanising the title character, showing the literal and metaphorical obstacles she overcame in life and celebrating her indomitable spirit in almost beating those men at their own (literal) game. He’s essentially pleading her case like a lawyer who says his client was just a bystander at best, well-meaning enabler at worst. It’s a tricky sell for anyone, but especially if you’re trying to build a movie around amazing business acumen and life-naivety simultaneously  Sorkin’s finger may wag and his brow may furrow at Molly’s lapses in judgement, but his disdain is reserved for her punters and his hopes of providing a heroine for the #metoo  generation is somewhat ill-framed.

Despite some revelations long being public-knowledge, it’s telling that the film shares Molly’s stance in refusing to explicitly identify many of the names involved in her high-stakes games… though even a passing knowledge of tabloid and Vanity Fair articles would certainly illuminate them. It’s probably a wise move giving the litigious nature of Hollywood, but for a film that purports to take you inside the seedier side of the machine, it’s another example of convenient faux-coyness when it suits and, frankly, not having the will to go all in when it counts.

Despite being too long at over two and a half hours, Molly’s Game is a fun watch, particularly if you’re a fan of the Sorkin template. Chastain has a career to envy, rarely putting a foot wrong and plays Molly with both sympathy and strut precision. Elba is equally smooth with what he has to work with, essentially playing skeptical verbal volleyball throughout.  Various familiar faces essay bigger Hollywood counterparts and Kevin Costner makes an arrogant, distant father/manager to whom Sorkin points to as the origin of Molly’s attitude.

It’s all a competent and assured debut from Sorkin, one that’s predictably entertaining and smart. But one suspects that the real molly Blume isn’t remotely as ingenue as she’s painted here. Poker is all about high stakes and in this case it’s hard to care about winning the pot, if the kettle of half-truths you’re selling is just as suspect a hue…

Molly’s Game is released on DVD this week… 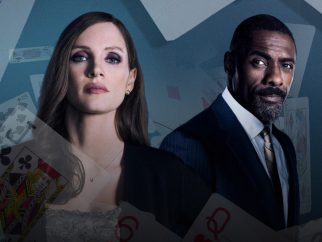