‘Wind River’: a strong thriller – with some reservations…

Unevenly paced but with a satisfying conclusion, the story of a murder on Native American tribal grounds works well...

During a hunt for  mountain lion that may be causing problems on a Native American reservation in mountainous Wyoming, expert tracker and hunter Corey Lambert (Jeremy Renner) comes across the body of a young woman in the snow. He instantly recognises her as Natalie the daughter of one of the reservation’s elder statesmen and the relevant law enforcement is contacted. But it wasn’t merely the cold that claimed her life, there’s evidence of a crime because – at the very least – something must have made the girl run hard and fast and barefoot for six miles against impossible temperatures and conditions.

Vegas-based agent Jane Banner (Elizabeth Olsen) is the nearest agent available to sign-off on the report, but with the coroner unable to say what the victim was running from, Banner needs to stay and find out the truth to avoid the case being shuffled off into a growing pile of less-important paperwork. It appears that Natalie had a boyfriend who worked on security for the local oil-drilling platform, but he’s missing as well. Lambert and Banner may well have to rely on each others’ areas of expertise to find out the truth and bring justice for the fallen girl…

Taylor Sheridan made a real impact with the screenplay for Sicario, the powerful, character-driven story of drug enforcement on the US/Mexican border. There was much to recommend that – so much so it received Oscar nominations – but it wrongfooted the audience in the way the plot would develop.

Wind River, Sheridan’s directorial debut, has the same obstacle to overcome – Sheridan often concentrating on certain aspects at the expense of others. For much of the first hour everything moves at the same pace you’d expect for snowy conditions: each step something of a longer, harder effort than your traditional thriller and with little real progress except laying the groundwork. The last act is something of an unexpected left-turn, such a sudden reveal that it’s tempting to think someone reversed the running-order of scenes and missed a ‘reel’ in the process. After the reveal of the who/whydunnit aspects of the story it’s a matter of dealing with and surviving the consequences.

Indeed, like Sicario, this thriller (though a little more traditionally straight-forward in story) really isn’t the really the whodunnit you might have expected going in, more a look at how the environment around the ensemble is the ultimate unforgiving leveller. It also has something to say about the way that crimes on Native American reservations are treated and (not) prioritised, to the extent that the film finishes noting a written testimony of such discrepancies.

Since his breakthrough in The Hurt Locker and then The Avengers, Renner has made a successful career of playing stoic, slightly weathered heroes forced to face the elements of their life-choices, so it’s easy to see why he was high on the casting list to play Corey Lambert, a divorcee more at home in the wilderness than in suburbia, despite wishing it was otherwise.  There’s a valid point in wondering why the character isn’t a Native American himself – which could have fit the story’s remit better – and despite  the film’s otherwise socially-aware undercurrent, the casting does somewhat run the risk of a ‘white saviour’ aspect.  Elizabeth Olsen’s Jane Banner is an FBI agent in the mould of Clarice Starling but without a criminal mastermind to offer her fava beans or frame her journey. Her character is well-played if under-written, a capable and intuitive agent but presetned as a fish out of water within those limitations. There’s able support from the likes of Graham Green, Gil Birmingham, Hugh Dillon and Kelsey Asbille makes the most of her brief appearance as the victim in flashback.

Perhaps there is nothing new or boundary-pushing about Wind River, but it’s proficient in execution, sometimes beautiful to look at and does almost everything right to the extent that whatever your initial doubts, you’re still compelled to follow it as it flows through its story, the ninety-minute journey  proving a concise and interesting one. Sheridan clearly has a gift for screenplays, but while still a  newcomer to the director’s chair, this proves he may be a talent to keep an eye on.

Wind River is now on general release from STX International… 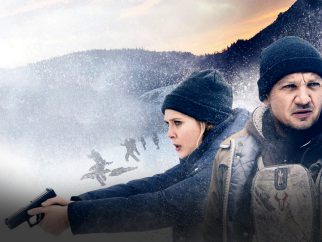