‘It Comes at Night’ arrives with dark chills…

Though its pre-publicity led many to believe this was a supernatural outing, this is more of a human-led horror... 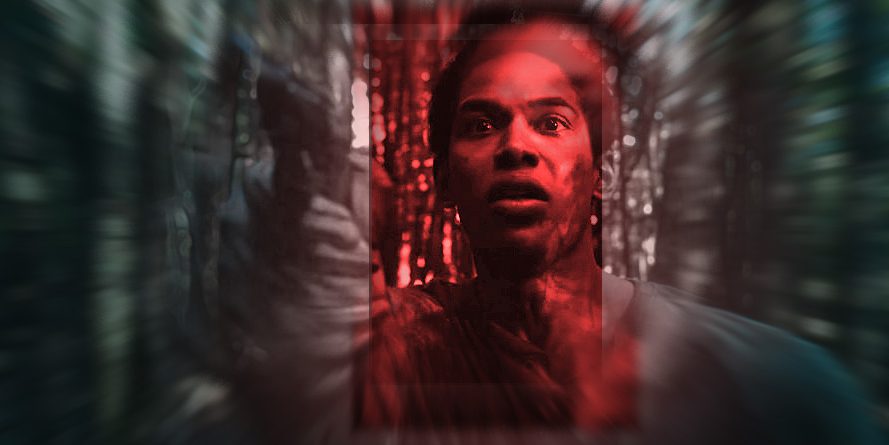 In the middle of a deep forest, the home of Paul, Sarah and Travis remains largely boarded up, with only one secure way into the property, through a heavily-fortified red door.  The family are hunkered down against the elements and a virus that appears to have devastated much of humanity.  They’ve just had to bury their grandfather, his body burned so the disease doesn’t spread.

One night an intruder, Will, tries to break into the house but when he’s captured by the family, he swears he’s alone – simply foraging for supplies to help his wife and child whom he has left some distance away. Paul’s first reaction to kill Will – keeping any potential physical or health threat in check, but is persuaded to check out Will’s story.

Despite a subsequent attack from men that Will says he does not know, Paul agrees to take the family in, as long as they abide by his strict security protocols. But the regimented calm of the house is unsettled by these new arrivals and the question quickly becomes a question of what each person will do to survive this corner of a hard new world… 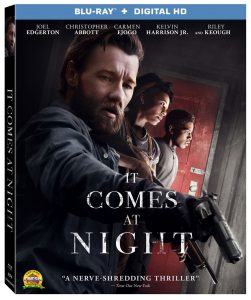 With its opening salvo seeing an elderly but alive man being wheeled out into the forest to die, it might be tempting to recall the Monty Python scene with the plea of a similar candidate assuring onlookers that he was actually feeling a lot better now, thank you. But the one thing you won’t get from the subsequent story that unravels through It Comes at Night is a lot of laughs. From start to finish this is a grim story about the cost of survival.

A brief glance at the trailer, a short description online and even the film’s ambiguous title might point you in the direction of believing that the film is the latest in a long line of horror movies priming a group against some exterior threat to their well-being. Instead, the main threat in this claustrophobic and taut thriller is arguably fear itself as the story explores if strangers forced together under extreme circumstances can or even should trust one another.

Those expecting more flashy post-apocalyptic action a la The Walking Dead or overt supernatural shenanigans like countless recent releases (of varying qualities) may be disappointed that the film resolutely ploughs an independent and quite realistic furrow. The levels of tension it creates  are all in the anticipation of what might happen and why. Exploring somewhat adjacent territory to the likes of 10 Cloverfield Lane, the plot is a character study of  power-plays between people of conflicting agendas noting that you don’t have to be a cannibalistic alien zombie vampire to be a monster nowadays. It knows its genre and territory well enough to offer olive branches and red herrings to its audience, knowing what clues and tells they’ll be looking out for and yet determined to keep its story away from the easy beats that usually drive such outings.

Australian-born Joe Edgerton (most recently seen in the critically-acclaimed and very different Loving) presents us a weathered patriach and survivalist. It would have been easy to portray the character of Paul as unhinged, but instead Edgerton gives him a weary pragmatism that may be extreme but is entirely logical and understandable given the dangers that may exist outside his fortified homestead. He may be a joyless father, devoid of beside-manner, but it’s equally true that all his rules and regulations are there for a reason.

Christopher Abbot (currently getting good praise for his role as Jessica Biel’s bewildered husband in The Sinner) walks a line between familial concern and suspicious stranger to the extent that the audience begins to share the paranoia and distrust of Will. Do the ‘cracks’ and inconsistencies in his story mark him as a genuine threat or not? Carme Ejogo is Paul’s loyal wife Sarah and Riley Keough is Kim,  Will’s partner and mother to the infant Andrew. The women are less well drawn than their male counterparts, but both imbue their characters with motherly instincts to protect their own. But it’s Travis (Kelvin Harrison Jnr.) through whose eyes we see a lot of the events unfolding. He’s the one without a partner, a potential ‘fifth wheel’ and also the character whose motivations kickstart the climax of the film though he remains the most innocent in other ways.

The fact that Paul, Sarah and Travis are a mixed-race family is never touched upon and it’s refreshing that this is an element that doesn’t play into any of the film’s important plot points, except perhaps to underline that paranoia is more than skin-deep, it’s a state of mind. 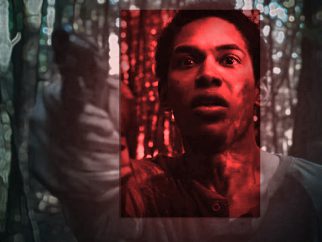