Holy Moses, the latest 'Apes' outing points the way to a cinematic promised land of possibilities...

Caesar (Andy Serkis) wants nothing more than to live in peace, away from the humans that seem determined to make he and his fellow apes their enemy. But Caesar is more than willing to answer any attack with brute and savage force. He’s not without mercy but his patience is growing thin.

When a series of devastating attacks on the encampment create not just carnage but personal tragedy, Caesar  sends his fellow refugees away towards a new land they may yet call home and sets out with his closest allies to confront the man behind the attacks – a figure who calls himself ‘The Colonel’ (Woody Harrelson). But is Caesar following the same dark road of revenge and distrust that led to the death of his friend-turned-enemy Koba (Toby Kebbell) and who still haunts his waking moments?

When the apes come across the Colonel’s compound, they realise that much more is at stake and how much they should fear a figure who believes just as strongly he’s fighting for the fate of his species…

There’s no doubt that War for the Planet of the Apes is as much a genuine war movie in tone as its title suggests and from the very first scene onwards there are clear overt nods to the likes of Apocalypse Now and Full Metal Jacket. When we see engagement it’s brutal, deadly and often merciless.

But in an era of pixels and perforated eardrums, ‘War…’ is also much quieter than you might imagine. Yes there are those set-pieces full of the requisite bullets and explosions, but the war is as much one of sheer  intent rather than just hand-to-hand combat scenarios. Director Matt Reeves tells a story that is timeless… it may be set in a near future /alternative present but it takes in obvious aspects of Vietnam, the early American West, World War II and even Biblical journeys as its touchstones along the way. It’s about that age-old problem of two ideologies heading for an almighty collision and knowing that triumph or defeat will genuinely turn the course of history.

Woody Harrelson’s Colonel (only ever referred to by his rank) may be led by his heart of darkness, but we learn later that his extreme stance is driven by pragmatism: trying to wipe out a genuine threat to humanity as well as a perceived one. The ‘wall’ he’s building at his dam-base might be as symbolic and useless as anything you’re seeing in the contemporary news, but in his own mind he’s an honourable soldier, doing the unthinkable only because the alternative is worse. 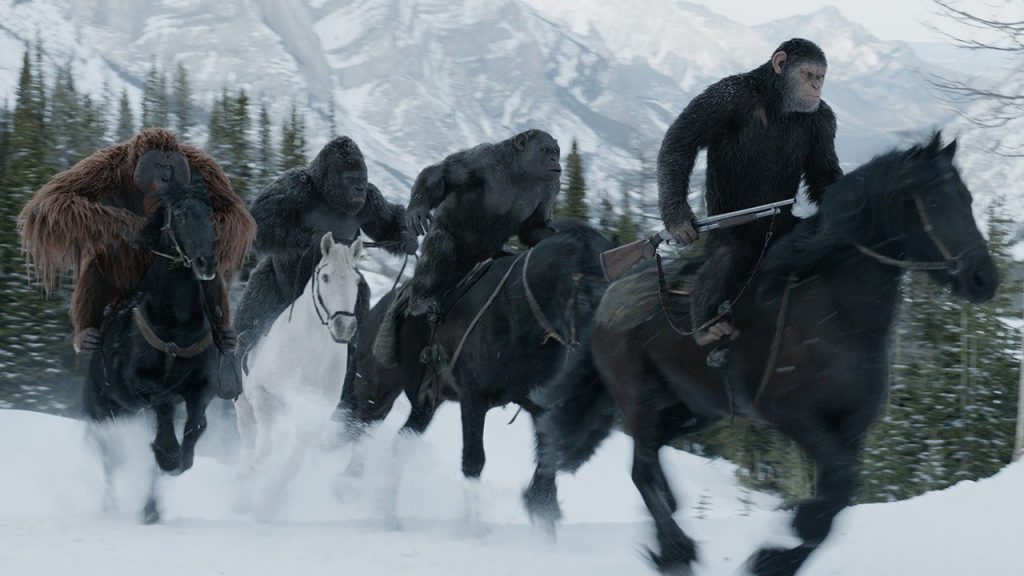 It could be argued that it’s taken three entire films to lay the groundwork for the new status quo and, no spoilers, but that ecological realignment of the species has only traversed a little further down the road from the last film by the time the credits roll here: there’s only a handful of apes encountered who can fully talk (most use sophisticated sign-language) and the wider planet is still up for grabs… this, in reality, was a significant battle rather than the definitive war or endgame and covers similar ground as the previous ‘Dawn…‘. In that regard it’s a slower and more patient film than many a summer blockbuster outing, but not one that drags.

We’ve now become blasé about the ability of Hollywood to destroy worlds in devastating new ways on a monthly basis. Weather, bombs, aliens, natural disasters… they have all the national landmarks ready to annihilate on speed-dial. But now here’s the real challenge: to put equal time and effort in stories of rebuilding them, to construct rather than deconstruct and if ‘War…’ is an indication of the battle-plan, then the march onward is an impressive one…

Serkis gives a performance as Caesar for which many are saying he should receive an Academy Award nomination and we’re certainly at the point now where performance artists of his calibre should be getting major recognition. Serkis brings a ‘humanity’ to the character and story, a performance  that’s every much the equal of anyone else who’ll get a nod for more traditional portrayals come next February and its largely that performance around which the movie pivots. Other  motion-capture performances worthy of mention are Karin Konoval as Maurice and Steve Zahn as ‘Bad Ape’ the latter staying just on the right side of comic-relief.  Amian Miller as the mute Nova  – a character created as a deliberate nod or more to the adult version in the original Charlton Heston entry – also impresses.

At the end of the day, it is films like War for the Planet of the Apes that more likely point to the new frontier being faced within the movie- machine. It’s light-years ahead of the now rather primitive  – but then still impressive and revolutionary special-effects and make-up of the original Planet of the Apes film’s era… but it still has the same heart. We’ve now become blasé about the ability of Hollywood to destroy worlds in devastating new ways on a monthly basis. Weather, bombs, aliens, natural disasters… they have all the national landmarks ready to annihilate on speed-dial. But now here’s the real challenge: to put equal time and effort in stories of rebuilding them, to construct rather than deconstruct and if ‘War…’ is an indication of the battle-plan, then the march onward is an impressive one… 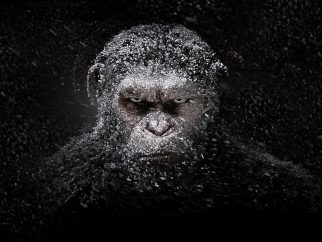 SDCC – ‘The Shape of Water’ trailer…