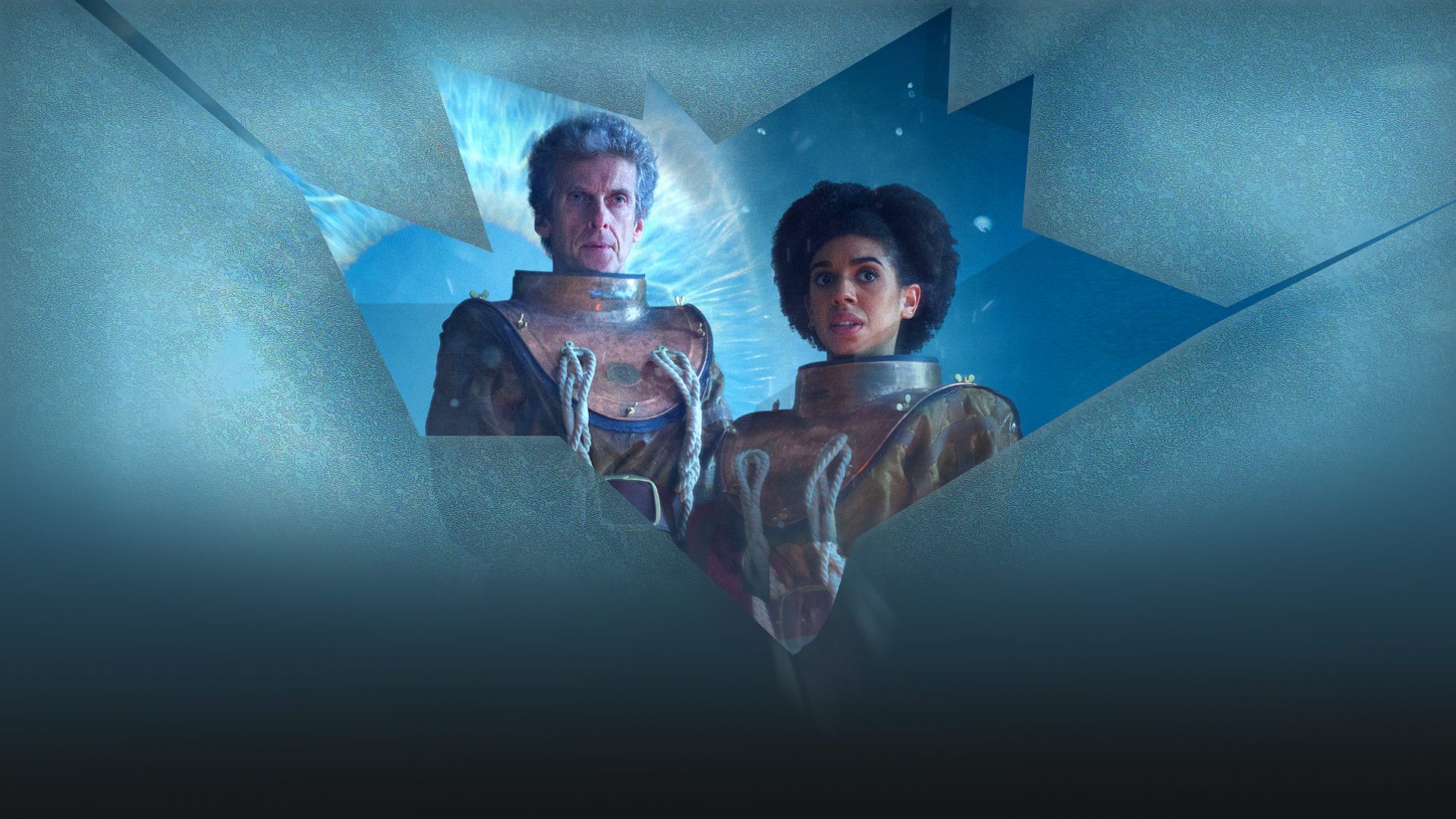 There's a beast below in the Thames of the 1800s... but are the monsters actually on the surface?
by John Mosby 29th April 2017

“Regency England’s a bit more black than they show in the movies.”

“So was Jesus. History’s a whitewash.”

Rather than heading home in time and space, the Tardis has insisted on bringing its occupants to the banks of the Thames in 1814, the last year of the famous Frost Fair – an event that would take place on the frozen wastes of London’s river in the far more colder winters of that century.  At first Bill is nervous that being a person of colour she won’t be welcome and – given slavery still exists – might actually be in danger, but she sees that reality is a lot more colourful than the history books sometimes make-out.

But soon concerns about skin and the rules of time-travel take a back-seat to a more pressing concern. There are lights that are appearing beneath the ice, often foreshadowing the cold end of unlucky Londoners who venture out too far. Just what IS the beast below and what human interests might actually be keeping it there?

The third episode of the new run gives an obligatory voyage into the past and the result – while having some very familiar plot points to previous stories – works out as a well-balanced morality tale for all the family.

Thematically there’s a lot of similar ground (or ice) covered to the 11th Doctor stories The Beast Below and Kill the Moon (the idea of a beastie being chained to the whims of humanity and the fate of a creature ultimately dictated not by the Doctor himself but on the shoulders and moral values of his companion) and even a smidgen of Eccleston-era The Empty Child with its bunch of ragamuffins surviving on the streets. Those similarities ring strong and perhaps too obviously for those with a longer knowledge of the series who will spot the joins, but one must also weigh the fact that Capaldi and Mackie bring arguably different nuances to the performance and as moral dilemmas go, there are bound to be ones that time-travellers and explorers come up against time and time again.

Again, it’s the interactions between The Doctor and Bill that anchor the episode. Mackie’s Bill is far more of a refreshing change to pace and proceedings than we might have expected – an antidote to the often over-confident Clara Oswald’s saga and whose own story had weaved too tightly into modern continuity. Bill is not the Doctor’s ‘equal’ or ‘the most important girl in the galaxy ™‘ but she is exactly the right person to be travelling with him now – amazed and in awe of the opportunities she’s being given, but asking the questions we as the audience want to ask and holding her ‘mentor’ to account in a way that is never SO awe-struck that she can’t try to pin him down when he’s deliberately avoiding the answers. The conversation moves from ‘butterfly effects’ through to basic safety issues. When a (relatively) innocent bystander dies, she starts to see the limits to his abilities and outlook: that the Doctor may be a ‘hero’ with a soft spot for humanity, but he’s not a perfect superhero and often has to make quite un-super decisions based on pragmatism and alien detachment. ‘How many people have you seen die?” asks Bill and then ‘How many have YOU killed?‘  These are key questions to ask someone you’ve just met and who has essentially assumed the role as your designated driver.

Writer Sarah Dollard (who gave us Clara’s exit in Face the Raven last season) now gives us a story that makes welcome and pointed observations about changing attitudes to race – both in the fact that historical dramas often paint down  the number of races around in period settings – without it ever feeling that’s the whole purpose of proceedings. Bill is our guide as she experiences the pros and cons firsthand and the subject is not sidelined the way it was in, say, The Shakespeare Code. There are pointed, genuine lessons here – not at at least in a nicely-cadenced monologue from the Doctor about individual values and ‘worth’ (and at which Capaldi is becoming deftly reliable). It’s not an epic ‘war’ speech a la The Zygon Inversion (which might have their gravitas diluted by repetition) but strong enough to make us know how passionately the Doctor feels about inhumanity and its consequences. And though it’s a little un-Doctorish, it’s quite fun to see the Time Lord leap to Bill’s defence from an upper-class oik in such a physical way (even if it’s literally a punchline to a set-up joke).

As the third-part in a basic introduction to the show, its been a decent if relatively safe, run so far: full of character quirks and banter that feel fun rather than forced. The special-effects are largely good for a tv budget  and Dollard makes the most of the location, even if the ending is, again, a little rushed. We might ache for some genuine gravity to come, but we can’t forget the ‘family show’ remit either. Hopefully we can now expect some depth to the series-arc to start making itself apparent (just who has been behind that vault door for just over fifty years?)  and when will we get to see some familiar faces as promised?

So, time to speculate… is there a Masterplan under the university or are we Tottering on the edge of a different revelation?