Somewhere over the rainbow, there's a storm brewing in NBC's stylistic reworking of the 'Wizard of Oz'...

Dorothy Gale works hard at the local community hospital, taking shifts and providing a welcome distraction for some of the patients who adore her. Perhaps they don’t notice or even choose to overlook her purloining some of their medication to take home to her Auntie Em and Uncle Henry. The couple have raised her since she appeared on their doorstep in the middle of a storm over two decades before and if they express concern that she wants to know more about her birth mother, Karen, they hide it as well as they can. But when Dorothy arranges to finally meet with her, the nurse arrives at the start of a massive storm sweeping the area. Dorothy finds Karen mortally wounded and warning of great danger but her attempts to help her are complicated by the arrival of a police-officer who mistakes her for the attacker.

At that moment the twister hits, swallowing up the patrolman and seeing Dorothy diving for cover in  his police-car, its only other passenger a police-dog,  before they too are whisked into the air. She awakens in a snowy wilderness,  just as the car plows into a bizarrely-dressed woman, seemingly killing the stranger instantly. The local inhabitants have mixed feelings: they have no love for the deceased witch, but they are equally convinced that the stranger must be a witch herself.

Spared but banished, she is advised that the only way home is to seek the help of the great and all-powerful ‘Wizard of Oz’ in the Emerald. But Dorothy has no idea of the perils she will face on her journey, the very few friends she will be able to count on… and the trials and tribulations that her arrival will cause to those who will do anything to hold on to power….

Emerald City so desperately wants to be Game of Thrones that you can feel it clicking its ruby-heeled slippers together so fast they almost catch fire.  After some basic set-up establishing that our new Dorothy is the kind of beautiful but troubled young woman that networks love, the show simply can’t wait to get away from Kansas and throw us headlong into a world of magic and metaphors it can play with more freely. And yet the limitations of being on a network at primetime drag on those ambitions a little, diluting the hardest and most interesting, surreal edges of the production.

That’s not to say that that NBC shouldn’t be applauded for their obvious investment in a very expensive series where every single penny is there on screen. There are absolutely stunning visual choices and set-pieces around which the familiar story pivots, pushing firmly against that same familiarity – but you’d expect nothing less from Tarsem Singh the director responsible for the likes of The Cell, The Fall, Mirror-Mirror and Self/Less. He’s in his element: cloaks blowing majestically in the wind with a life of their own, haunted eyes gazing out from blood-splattered faces, bejeweled elegance dripping from every costume and gothic drug dens staying just on the right side of FCC-approved decadence and depravity – all making appearances as they circle the titular city with looks of wonder and disdain. It’s that dazzling, inventive, textured imagery that twists and tugs on the traditional tale and which helps raise the series above what could have been a very pedestrian walk down the Yellow Brick Road if we judging on dialogue alone.

The ensemble cast are a mixture of relative newcomers and veteran performers. Puerto Rican actress Adria Arjona has been making a name for herself in recent years (with the likes of True Detective and the forthcoming Pacific Rim sequel) but this role in the center of the maelstrom is likely to be the project that garners her the most attention. She’s a capable, dynamic cross-cultural Dorothy Gale who will never be caught singing about bluebirds and rainbows but has enough screen presence to hold the attention. Her first companion is an almost-crucified amnesiac whom she names Lucas (Oliver Jackson-Cohen) but who looks as rough and ready as… well, a scarecrow. Jackson-Cohen gives us a character who needs his brain rewired, not through stupidity but through the ravages of PTSD – the need to remember who he was, though his war-torn past may be far from perfect. By the end of the two-chapter/hour debut, the duo (the threesome if you count ‘Toto’ the police-hound) are the closest thing this strange land has given to ‘friends’.

Vincent D’Onofrio is the ‘Wizard of Oz’, and though many references are made to the character’s literal power, it’s telling that much of the deference paid to him seems to come because of his past reputation and current almost-political machinations against the forces of magic. Last seen playing Wilson Fisk in Netflix‘s Daredevil, the actor specializes in roles that give him subtext and though ‘Oz’ is far more bombastic than the crimelord of Hell’s Kitchen, there’s a nice through-line on how people earn, steal and keep influence and power by perception alone.

Elsewhere Joely Richardson’s icy Glinda is played as an aloof and distant cousin of Middle-earth’s Galadriel and Romanian actress Ana Ularu gives us the equally witchy ‘West’ as a dark and dangerous addict/ingenue with her own agenda. Respected screen and Shakespearian actress Fiona Shaw steps straight out of a ‘Tempest’ and makes an appearance as a captor with her own agenda. There’s also a blink and you’ll miss it role s for Gina Bellman (late of Leverage) as Gale’s birth mother in the early Kansas setting for the series and whose predicament as the storm hits must be a plot-point that will seek resolution later in the run.

On one hand you can justifiably argue that it’s all a bit of a mess – a clash of styles and intents that really shouldn’t work – like a children’s party catered for by George R R Martin or a pantomime designed by David Lynch. On the other hand, Oz is a world designed to be OTT and reflective of themes and metaphors so the scattershot elements offer a delicious bag of opportunities – differing flavours and counterbalances that sometimes work surprisingly well together. There’s a subversive element and darkness on show that can be found more evidently in Baum’s later books about Oz  and the gender-swapping and reinterpretation of key races and individuals hits more targets than it misses. There are moments when you’ll roll your eyes and others where you’ll smile at the ingenuity of it. It’s entirely possible to pick apart specifics in the needlework that Emerald City has used for the counterpane on which it lays its foundations, but while wondering how much more interesting it would have been better played out to wider extremes on cable, it would be equally unfair not to applaud some of the chances taken with a show that feels different from just about anything else on network television at the moment (especially those that are re-inventing old properties with far less imagination).

Oz gives an interesting and wide canvas on which visionaries and story-tellers can tell their versions of stories we’ve come to know. In that respect Emerald City (executive-produced by David Schulner, Shaun Cassidy, Josh Friedman and Matthew Arnold) is a strong entry, at least with its looks. If ever a Wiz there was, the original 1939 outing is the one because, because…. but one cannot ignore the latest entry, simply on the face value of all the wonderful things it does too. Where the Yellow Bricks lead us will likely be less musical but an interesting series of notes – all there, just not necessarily in the right order.

Emerald City is broadcast on NBC every Friday at 9:00pm EST. 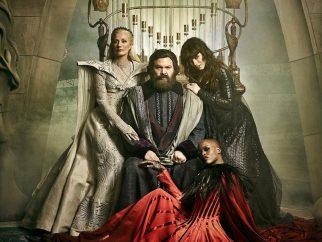