Artificial but intelligent, HBO's latest starts slowly but begins to ask some interesting questions about life, the universe and everything

The near future. Leaps in technology and the lifelong work of Doctor Robert Ford (Sir Anthony Hopkins) have allowed advancements in cyber-technology. So much so that the very richest and most influential people can buy time at an isolated park where they can live out a range of storylines and scenarios, populated by the most lifelike robots and artificial constructs every created. Want to be a western gunslinger? We can make that happen. Want to indulge in your wildest sexual fantasy? This is the place? Want to kill without consequence? You can do so day after day and we’ll repair the damage as good as new.

There are plenty of safeguards. Nothing can ever go wrong.

An almost hermit-like Ford buries himself in his work, creating new nuances and flourishes to his work, making man and machine ever less distinguishable. But when several units respond to the latest update with breakdowns or unusual behaviour, Bernard Lowe (Jeffrey Wright), the Head of Park programming is instructed by Sidse Babett Knudsen’s Theresa Cullen, the Operations Leader, to find an immediate, if drastic solution. To keep the integrity of the parks, they will need to withdraw every updated unit and reprogram them. The only narrative way to do so is one that will cause massive, if wholly artificial carnage to storylines across the themed areas.  That being said, tomorrow is another day, even if it’s the same one for the artificial life-forms.

But will the efforts be enough or is there something within both man and machine that will seek to survive that purge of personality and information?

The much-anticipated Westworld reboot arrives and in many ways it’s been worth the considerable wait. After all who doesn’t like sexy robots and deep, profound insights into the nature of life? Just ask Tricia Helfer’s Number Six in the Battlestar Galactica reboot of a decade ago.

The comparisons and parallels with BSG can’t really be ignored. Both of their most recent incarnations essentially take an adventure format from the 1970s and decide to go much deeper into the concept, exploring the ethical and existential as well as the action element. Battlestar decided the nature of man vs machine could be played out on a cosmic landscape while Westworld’s seeks out the earthy (if synthetic) sands of the Old West, but the age-old ponderings of life are similar.

Westworld’s pilot is largely series set-up, offering a taster for the format and a platter of questions without many answers, playing its cybernetic, synthesbian hand close to chest.  Interestingly  and perhaps tellingly, there are no real heroes as yet, merely an ensemble of charactersand a scenario that highlights conflicting agendas and evolving technologies.

Though clothed in artificial skin and punctuated by daily ‘resets’, this is very much an exploration of basic human instincts – of both the good and bad varieties. Even around a story that explores the nature of supposedly  ‘harmless’ and ‘consequence-free’ actions, it’s easy to initially hate, for example, the Man in Black – played with a cold confidence by Ed Harris – his acts of brutality and violence seem to mark him immediately as the enemy to be shot down like the villains of those old wagon train epics. Easy too to despise some of the paying guests who revel safely in artificial bloodshed like big game hunter wannabees displaying their ‘prowess’. But the counter-argument is that everyday, gamers rip the spines out of pixelated-monsters, drive cars recklessly through vector-graphic streets and commit war crimes from the safety of their desktops without caring much for the mechanics. The creators of the Westworld park offer that ‘killing’ a robot is no different – the only complication being merely the suspension of disbelief created by the tech. Even one of the mechanics Lee Sizemore (Simon Quarterman), muses that if customers are paying for that degree of separation of reality and fiction, there’s a case for not making the robots any more real than they seem to be already. 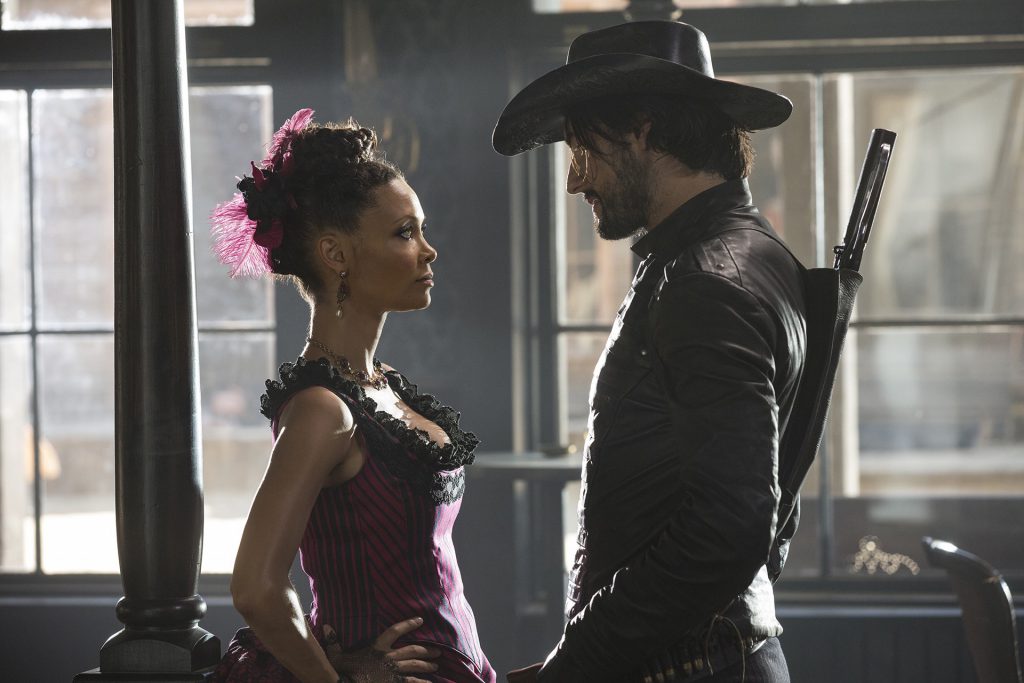 Hopkins is the biggest name here and he gets to play the kind of cantankerous veteran at which he long ago found his niche – always playing characters that internalise their actions. Half of his performance is solely in his eyes and furrowed brow, the rest in the inflection with which his voice offers more questions than answers. It’s a well-cast role, essentially a troubled Gepetto with a thousand Pinocchios, a though one wonders how the character will be fleshed out as the mini-series goes forward and what lies may affect his creations. Harris bristles as the gunslinger with a mission and Evan Rachel Wood’s  Dolores brings a quieter determination but holds the screen throughout. Supporting players such as Thandie Newton, Rodrigo Santoro also hint at moving to the forefront as the stories continue. Of particular note, one must also mention the performance of Louis Herthum as Dolores’ ‘father’ Peter Abernathy and the first unit to show signs of an awareness of self… something he demonstrates in a heartbreaking and bittersweet scene later in the pilot. if that’s the benchmark for the individual performances to come, it’s a good one.

There are many questions about motivations with several characters looking to have something to hide and acting beyond their surface agendas. A nice curveball wrong-foots the audience early on and it’s also interesting to speculate on what we’re not told or shown? How does the selection process for guests actually work? What do the other park areas look like? What is the world oustide like… and just what are the differing levels of interest in the park’s potential for activities other than sheer entertainment?

HBO’s platform allows for a sprinkling of nudity and ‘bad’ language. Though there’s a moment of  pseudo-lesbian lip-locking in the pilot, the first episode suggests the attitude to both is more casual than titillating – though a means to an end. Naked robots stand around but for the moment certain scenes feel more like The Matrix’s idea of a nudist beach than anything more salacious. There’s indications that will change (the production ran into union problems during production with the contract specifics of such clothing-free background players).

Westworld’s pilot sets out its stall pretty well following a similar principle to its Jurassic cousin (with touches of Groundhog Day, The Truman Show and the aforementioned BSG and some clever if anachronistic music) with the idea that there will always be consequences and that evolution will find a way forward whatever the safeguards. The burn will be slower and have less sharp and pointy teeth, but there’s every chance that if the show can gather momentum as it explores the potential and plans of its various dramatic players, it will be well worth watching that evolution happen. Whether it can sustain that narrative past one season (five seasons is the apparent gameplan) and continue to push the frontiers back is another matter, but for now this is how the West was won.

Westworld is on HBO’s schedules at 9:00pm Sundays and you can see the first episode for free at HBO.com 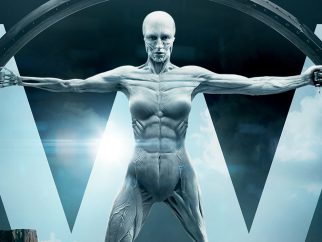