Netflix's new world-building animation, from the League of Legends gaming universe, is nothing less than stunning....

On a battlefield bridge, two young girls – Vi and Powder –  find they are now orphans and Vander, a man with previous blood on his hands, finds a new reason to go forward. As the years pass, the divide between the shiny city of Piltover and its neon-hued patchwork undercity district of Zaun seems to grow deeper, tolerance for each other breaking down and fraying at the edges and its policing more a game of pragmatic cat and mouse.

‘Upstairs’, youthful inventors Jayce and Viktor race to combine an age of machines with an age of magic and their evolving ‘Hextech’ and powerplayers quietly invest in their successes and failures… ‘Downstairs’, the likes of Vi, Powder, Vander and their friends make the best living they can, often skirting the edges of the law and vainly avoiding the dangers and trouble that seems to follow in their wake.

But a fateful and perhaps ill-advised journey into Piltover is about to set off a series of events no-one could have envisaged. A new power is about to be harnessed and everyone will want it – the question will be what they are willing to give up to possess it.  It will be a sea-change years in the making, but will bring loss and heartache. In a battle fought on the streets and back-alleys and the halls of power and across the days, months and years to come… loyalties will be tested, family-ties will be severed and blood will be spilled…

While there is clear evidence of its game-play origins in its kinetic energy, there’s something still, quiet, tall and proud… and quite stunningly beautiful and innovative… about Netflix‘s newest animation Arcane – the combination of its painted hues, distinct light-sources and exaggerated (but not askew) face and body physiques and the world of steam, stone, neon and steel in which they traverse. It’s that marriage of design and movement, the choreography of conflict – sometimes as beautiful as a ballet, sometimes as bone-crushing as the most savage fight – that is quite simply mesmerising.  If that sounds overtly gushing, it’s simply that I’ve  not seen ANY television show quite like this before. And it gets better in every consecutive entry.

The steam-punk, alt-history and only-just fantasy setting demonstrates some impressive world-building that wants to make viewers gaze as longingly in to the background as much as take part in the foreground action. If budget was truly no object, one  could imagine such a tale portrayed in live-action, but even that would lose some of the moodiness that the animation avenue provides, story-telling through a canvas rather than through a camera, but with the stylistic framing choices of a top-notch, slow-burn Oscar-worthy blockbuster. It’s not that you haven’t seen some of these elements before – steampunkish fantasy settings are hardly unique in any modern medium – it’s that it’s clear from the outset that each of those elements has had hearts and minds applied to work in tandem.  It’s closest cousin would be the recent Carnival Row (ambitious in its own right and returning soon after COVID delays), but somehow Arcane‘s world is even richer. Produced by Riot Games and Fortiche Production (the Paris-based animation studio), it’s an international venture. Once the edgy Enemy (from Imagine Dragons) starts to play in the opener, it’s also a statement of intent on a multitude of levels.  It’s a lot of talented voices working in tandem behind the scenes, but, notably, there’s barely a single word spoken during the initial flashback introduction, though it introduces us to a tone full of emotion and angst, a building-block for the world we’ll be exploring as time ebbs and flows.

This is not a show aimed at kids, though the more discerning may fall in love with its look as quickly as adults. The quirkiness of the opener quickly becomes far darker as the episodes speed by and serious time-shifts occur as deadly, sometimes unexpected consequences play out… and it would not be surprising to find that the real power behind its rapid ratings-success is largely down to older audiences and their investment in its dark tapestries. Though set as a prequel to the League of Legends  MOBA (multiplayer-online battle arena) experience from Riot Games, the show actually benefits from you not having to know a single thing about pre-existing stories or platform in advance – indeed some of the necessary liberties taken in having to turn characters often represented in knee-jerk game-play or connective ‘scenes’ to more fully-rounded parts of the drama, pays off well. Each of the nine forty-four minute chapters (broken into three sets of three episodes) work as well as any live-action series and  though live-action game-adaptations such as The Last of Us and CGI variants of Star Wars/Trek are getting a lot of interest, it’s tempting to think that Arcane’s mixed-media approach could legitimately lead the way on an evolutionary level, setting a very high benchmark for more alternative avenues of limitless pre-established IPs and familiar brands.

There are moments that invoke Game of Thrones betrayals and intrigue rather then the more generic Saturday morning cartoons of old and that’s no accident. In lesser hands, Arcane could easily have become a forgettable template experience, a generic quick money-making spin-off built to fill a traditional slot, but Riot Games (who, an LA Times report cites, had 180 million people  playing within the League-brand of games in October alone and with existing spin-offs already including music videos and comics) decided to take a riskier route, assessing a long-game (no pun intended) strategy that builds the brand slowly and critically rather opportunistically. It was a bumpy road, with stops and starts en route, but not a short cut as Riot flexed against the existing journeys to screen and learned what they could and couldn’t do, sometimes defying expectations.  But it was worth it.

Arcane‘s ensemble is expansive – slowly populating its considered, expansive world-building with an assortment of diverse characters who take their time to interact. There’s a range of talent providing the voices. Hailee Steinfeld, (Kate Bishop in Disney+/Marvel series Hawkeye launching this week) is the voice for Vi with Ella Purnell (Army of the Dead) as Jinx. Kevin Alejandro – late of Lucifer – takes the role of Jayce Talis. Harry Lloyd (Doctor Who, Counterpart, Game of Thrones) appears as Viktor. Jason Spisak essays Silco, the sinister force drawing many others together. The visual design of the characters balances the vocal performances and is collectively outstanding.  Our ‘heroine’ Vi has the look of plenty flame-haired heroines from a multitude of mediums, though for some reason she reminds me most of Joss Whedon’s spin-off comic-creation, the future Vampire Slayer known as Fray.  Jinx, her opposite number in heartbreaking ways, might be a little too reminiscent of one Harley Quinn in askew design and movement, but there’s an innate adolescent energy to her look and an attitude that works. The villains are particularly creepy, Spisak’s Silco is a scared, almost skeletal figure but the combination of look and action makes him all the more scary in the quieter moments. Vander is strong and tough, but not infallible. Other characters indulge in various political powerplays and are as fascinating as each other, rich in look, sound and motivation.

In a modern disposable world full of quick-cut fixes and often far-too-derivative material, Arcane remains that elusive holy grail – a rich adventure that entertains you in the moment, feeds you like a banquet and yet still leaves you wanting more. With the news that the astonishing ratings and ongoing positive critical response have ensured a second season for Arcane, one hopes that this level of quality  endures. If it does, we may be true to proclaim we are witnessing a true sea-change in what’s possible and expected, not just in animation, but on television as a whole. 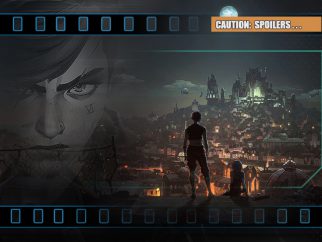