It’s 1967 and the Tardis, hijacked and thrown off-course by a Weeping Angel, lands in the sleepy Devon village of Medderton where the inhabitants are searching for a missing child. But even before the Doctor can establish the ongoing nature of the immediate threat, Dan and Yaz are thrown even further back in time.

Desperate to uncover the source of unusual readings in this ‘cursed’ town, the Doctor finds herself at the home and laboratory of Professor Eustacius Jericho whose test-subject has a familiar face. But the Doctor may  – literally – have no time to get to the answers she needs. An army of Weeping Angels have descended on the village and they have an unusual agenda. They are after one specific person and will stop at nothing to get her.

The Doctor may be prepared to make a deal, but at what cost to those here, now, then and a galaxy away?

No-one quite does ‘quaint village under attack by aliens’ with quite the gusto of Doctor Who. Scattered through nearly five decades of adventures in space and time, the  idea of comfortable enclaves and country hamlets turned into sudden suburban battlegrounds by would-be invaders such as Zygons, Cybermen and Daemons (then ultimately saved by an equally quirky guy in a flying phone-box) is one revisited time and time again. So perhaps it shouldn’t be a surprise that the best episode of the modern Chibnall era in quite some time – though that’s still grading on something of an event-horizon-curve – finally finds its comfort-zone in such a place and formula.  The season’s all-encompassing arc, one regarding a budget-busting time and space storm called the Flux ripping through reality, has noticeably become more like background noise for several episodes and Village of the Angels also feels decidedly like an entry that might have existed in part before the pandemic caused a season-retooling as a mini-series with rather abstract connective-tissue.

The Weeping Angels are often considered to be one of Steven Moffat’s signature creations – their success perhaps governed by their unique, almost ethereal, unobvious power as well as the innate terror that graveyard statues and a sense of darkness bring. They’ve also worked because of their brevity of use. They’ve reappeared a number of times but at their best when their signature threat is delivered without flourish. This latest story is a little like Aliens to the original Alien – a stop-motion entry where the threat is increased by numbers but the basic element remains. However Chibnall/Alderton’s story requires some handbook additions to make it work. The tale has to find a way to make at least one ‘Angel’ unique in its methodology, to let it speak in some way and for an army to be flash-cutting their way through their pursuit… and the most part the sleight of stony hand works.

This latest feels like a story that would have made a solid start to a standard two-parter in a normal run. The set up is a village under-siege and several inhabitants either helping or hindering our heroes. Some, as you expect, become cannon (canon?) but there’s also some interesting guest characters who mostly survive the experience. After his youthful, shiny-suited appearance in the 1980s’ episode The Twin Dilemma, veteran actor Kevin McNally returns to the show, now playing the delightfully named Professor Eustacius Jericho. McNally, along with the script (penned by Chibnall and Maxine Alderton) gives Jericho a tweedy eccentricity that gives way to bravery and determination and a understated sense of noblesse oblige. Often there’s an element of stunt-casting but McNally seems to be genuinely enjoying the role and inhabits it well and he becomes something of a saviour to the trapped travellers.

We also have the return of Annabel Scholey’s Claire (introduced, briefly, in the season opener) and there’s some clarity to her situation… up until now it seemed confusing to track the events from her perspective. She clearly seemed to know the Doctor and Yaz before their first scenes of them together, but we now find out that this was largely down to her having handy ‘visions’ that gave her something of a handwavery info-dump prior to that meeting . No, it doesn’t quite work on closer inspection and feels like a bit of a cheat to not explain it better, but at least we know her continuity a bit more (tracking her from her post-vision meeting in the modern era and then transported and trapped in the 1960s. It’s hard to know her exact fate at the end of the episode, but Scholey has a real presence and one hopes that she’ll continue to play a part.

As in some previous recent episodes, the Doctor becomes more driven more by discovering personal elements to her fractured past than the immediate threat. (As is often the case, the Doctor’s companions are quickly separated from her and  shuffled off to deal with their own peril – here Yaz and Dan finds themselves transported back from the 1960s to the early 1900s. Though little is actually achieved, it’s good to see them uncovering important pieces of the story, even if it takes until the end to start fitting everything together…) The ‘Division’ backstory re-enters the frame, though it’s mostly set-up for what is likely to be an important issue on the matter next week. The mythological mix that’s been created by Chibnall still remains a sore-point that feels at odds with the nature of the show itself, but he feels determined to commit to it fully and one can only hope that imminent revelations make some sort of sense rather than the higher-budgeted fan-fiction they’ve seemed so far.

The ending is, undeniably, a genuine doozy – there’s no argument that the Doctor ( with Jodie Whittaker given more darkness and tension than in the whole of her run thus far) being transformed into an Angel statue, ready for transport back to ‘Division’ works as a visual and cliffhanger.  Equally the playing of the very first Doctor Who theme music over the credits and those self-same lists interrupted by more story concerning – Bel and Vinder – works to accentuate the feeling of time becoming disjointed.

Definitely the best episode of the current run, but very much dependent on what comes next, this feels like an echo of the tone that could and should have been evident much earlier, even before this latest run.

Too much, too little, too late? Only time – ironically – will tell. 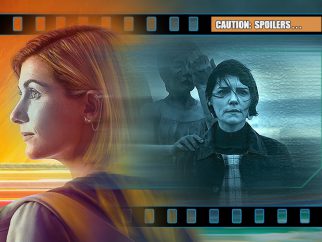