Fun but all too familiar. A three star romp that's glossy and glam but just not great...

Nolan Booth (Ryan Reynolds) is a fast-mouthed, snarky art-thief who takes on jobs for the thrill rather than the pay-off. He’s very good at what he does and has a home full of stolen artefacts to prove it. When Interpol Inspector Urvashi Das (Ritu Arya) and an advisor named John Hartley (Dwayne Johnson)  finally corner him, they want to use his ‘talents’ to capture his rival, a thief by the name of The Bishop (Gal Gadot) who is on a mission of her own to ‘reunite’ the three mythical golden eggs once owned by Cleopatra and achieve a record-breaking payday…

But it appears that even the best-laid plans can go spectacularly wrong and the result is Interpol being hacked and Hartley’s history scrubbed, painting him as not a crime-fighter but actually a number-one suspect who just ‘happened’ to be there when the mission failed… and also leaves the Bishop clear to continue her sticky-fingered quest. It looks like ‘The Bishop’ has taken her pursuers out of the game in one move.

Now Hartley and Booth will have to work outside the law to complete the egg-set before Bishop. But can they do so when Interpol is always close behind and the Bishop always appears to be one step ahead?

In an average year, this would be a safe-bet, if disposable blockbuster – the kind that critics are ultimately divided on, depending on their tastes, but which the public – looking for two hours of escapism – helps bring in enough money to have talks of a sequel. Of course, these are ‘interesting times’ and thus the film had landed not at the multiplex cash-registers but at Netflix where the gauge of its success will be different. However it is already proving a hit for the streamer.

Frankly it’s hard to go wrong when you have three of the biggest stars on the planet in your film and a tried-and-tested formula to show off their  talents. In the case of Red Notice, it just about gets away with asking its stars to simply play to type and providing them with a suitably ludicrous but well-budgeted, fun romp to do just that. There is absolutely nothing here that you haven’t seen before and, arguably, all of its stars have been behind the wheel of better vehicles, but Red Notice duly puts its pedal to the metal and keeps it there for its entire running time.

Essentially My Hitman’s Bodyguard’s Archaeologist Raided a Lost Ark and all I got was this National Treasure T-shirt in premise and execution, with Reynolds’ treasure hunter throwing out the kind of barbs and asides that have made his career and made Deadpool so popular (this time done so without breaking the fourth-wall) and Dwayne Johnson being Rock-solid as the long-suffering ‘straight man’ to the jokes, dragged along and forced to work alongside the thief to accomplish his goals… bashing heads together – metaphorically and physically. Gal Gadot entered the audience-consciousness with both the Fast and Furious franchise and, of course, Wonder Woman. WW1984 may have been an unanticipated critical bomb, but Gadot has long since proven adept at handling action, drama and comedy beats with slinky, effortless grace. That’s exactly what (and all) that’s needed here – a cross between Jessica Rabbit and Catwoman.

Ponder the plot for more than a few seconds and you’ll unpick just about every element in the mix but these sort of films aren’t meant to to be ‘solved’, simply experienced and director Rawson Marshall Thurber  (who worked with Dwayne Johnson and Kevin Hart on the far more satisfying and emotionally-grounded Central Intelligence) knows it. The action-scenes need you to suspend disbelief as they defy gravity , but the stunt-team and fight-choreography department earn every penny with multiple sequences that keep the pace pounding ( and the editors do a similar job of blending the capable actors with the more out-there requirements – swinging from multiple buildings, car-chases etc).

There are some twists and turns along the way as loyalties change, but nothing that will surprise you too much as we get distracted, flitting across the globe – Italy! Argentina! Egypt!  It’s so busy catching itself in the mirror and laughing that it  often feels like the film  can’t decide whether to be a send-up of the entire genre or to embrace all those OTT factors… and so finds a comfortable middle-ground that delivers but without excelling at either tone. Amid countless homages and winks to staples of the genre , the banter sparkles with just the right tint and there are some nice jokes, in particular a nice Richard / David Attenborough running-gag through one scene.

Definitely guilty-pleasure fun, but uninspired and it’s a shame such a tri-star vehicle doesn’t deliver  more bang than the expected basics given the talent involved… but what’s there is ultra-glossy, silly and action-packed in a does-what-it-says-on-the-tin kind of way and there are certainly worse ways to deliver results. 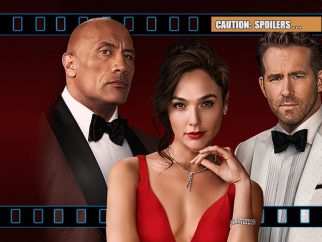 The Country Un-Discovered: Trek series now not in UK until 2022…