Once, Upon Time? Those hoping for answers will have been disappointed as 'Flux' gets more messy...

In a desperate attempt to save Yaz and Vinder, the Doctor steps in to channel the space storm/vortex through herself rather than her companions, but all it seems to do is splinter time further. The Doctor finds herself fronting an attack on the Atropos Temple but when is she? Dan and Yaz relive moments from their own time-streams, aware that there’s something wrong and Vinder gets to see a fateful decision that sidetracked his career. All the while, the Doctor tries to restitch them together and find a way to subvert the immediate danger that Swarm and Azure present.

And far away, a young girl called Bel travels the galaxy  – trying to avoid the worst monsters in the universe – all to find the man she loves…

To quote Rocky Horror, Doctor Who: Flux‘s latest chapter is still “Lost in time… and lost in space… and meaning…”

So far, every episode has ended on a cliffhanger which is entirely ignored or instantly resolved in handwavery fashion by the opening moments of the following episode and then followed by a story which goes off on a tangent. From the first episode to the second, the ultimate cosmic force that had ripped apart planets appeared to enter the Tardis and then… our ‘Fam’ simply woke up in the Crimean War with no real explanation for survival. From the second to the third,  Swarm was about to destroy Yaz and Vinder by channeling the vortex energy through them and then… we open with the Doctor jumping in and removing everyone from immediate danger and somehow creating an episode that darts around space and time and does whatever the scriptwriter wants with no apparent reason.

Once, Upon Time is really an excuse for, once again, delaying momentum – a filler episode of sorts, representing a series of flashbacks to Swarm and Azure’s first eons-ago confrontation with the Doctor (or a previous incarnation) and to side-shuffle her companions off into playing sequences that highlight random parts of their lives, or may not as they participate in reliving memories that are askew. The Swarm flashbacks at least fill in some detail but the companions’ scenes seem like a hastily written way to pad out the episode.  Equally, the mini-series began with some decent special-effects to garner interest and praise, but here a lot of the ‘time-storm’ sequences looks like it could almost have been designed and broadcast back in Doctor Who‘s original era. Through the episode Whittaker frequently ‘floats’ in and out of the Vortex, a cosmic lay-by between other scenes, but if the ‘suspended by wires‘ aspect was any more obvious in execution it would give the climax of the original Highlander a run for its money. The blue-flying insect-like particles were equally retrograde.

There’s far too much going on to add new characters into the mix, but that’s exactly what Chibnall does here.  Thaddea Graham (last seen in the grows-on-you-but-gets-cancelled Irregulars) plays Bel who is a potentially interesting character – an Ace-like creation who is seen surviving Daleks and Cybermen in her debut)  but one whose connection to other characters is oblique until the dying minutes. Then we get to see she’s Vinder’s wife/partner and carrying their child. As pregnancies in time-travel stories always set off red-lights we should probably wonder who the child will grow up to be.  It’s also interesting to see the ‘Ruth’/ Fugitive Doctor again, though it’s really little more than a reflection and cameo and however good Jo Martin is in the role – and she is –  it will either exasperate or please viewers depending on how much last season’s finale traumatised the party-faithful.   Another veteran face is Barbara Flynn who appears in one of the Doctor’s time-skipping visions and seems to have foreknowledge of the Doctor’s life to date and – in vague fashion – revealing that the Flux is linked to the Doctor herself and is an inevitable end to one universe and the start of another. Is ‘Awsok’ – as the character appears in the credits – another new character or perhaps a future Doctor or even the White Guardian from the distant past. Who knows – or rather, she doesn’t.

The Weeping Angels should bring terror to the viewer – one of the most effective modern creations of the show. Add in Cybermen and Daleks and you’d think this would be an anniversary-level epic. However here, they are all but window-dressing to a somewhat inferior outing that doesn’t deserve them. Swarm and Azure continue to be pantomime villains – acted with delicious scenery-chewing aplomb but largely there to sneer so far. That’s underlined by the way they reappear at the end of the episode, not where they were at the start, but having to walk back into proceedings as if they have just been given their cue stage-left after an obligatory music number, only for them to twirl moustaches, cackle, swish their coats and head off stage-right. There’s potential in their characters, but rather than being ‘Ravagers’ they are proving to be more more ‘Posturers’.

For an episode that seems designed by the forces of chaos and deliberately asking more new questions than it answers old ones, one quite horrible aspect of it all is the amount of unapologetic exposition to keep the viewer up to speed (or, at least being dragged along behind it). Though the Doctor has always  had a habit of voicing  their thoughts, Whittaker’s incarnation is a record-breaking veritable verbal dictionary at times and never has there been a more blatant example of this than Once, Upon Time. From start to finish, the Doctor is essentially reading the script and stage directions to the audience (almost literally) and making huge assumptions to justify the next move  – something that’s become the epitome of Chibnall’s ongoing disdain for the ‘show, don’t tell’ maxim. A little technobabble is essential in sf, but it shouldn’t be used as a regular escape-hatch or to untidily seam sequences together to explain what a character is doing. Steven Moffat sometimes came a cropper with this, but at least the weaving was more intricate. (Chibnall’s homaging of past series highlights continues –  the Silence of the Library / Forest of the Dead classic – which introduced River Song seems similar with the ‘how did I get here?‘ moments of lucidity for Dan  and the Passenger / Diane assimilation echo Donna Noble’s assimilated experiences in that story  and the Doctor floating around in her own timestream seem pillaged from the pre-anniversary story, The Name of the Doctor.

Hand on hearts, I’ve tried desperately to remain open-minded and not pass judgement on Flux before its finished and to hope that Chibnall would be able to provide something that sends off the current era of Doctor Who in a way that, if not spectacular in achievement, could be one that a viewer could take-or-leave but at least survive in some fashion. It could still happen. But on the basis of half the mini-series’ run so far, I’ve yet to see anything other than wildly scattered concepts, rather appallingly-scripted dialogue and iffy execution of such stitched together in a way that I’m not convinced it isn’t already unravelling if it ever held at all. At a time when fans seem more divided than ever before, there’s absolutely no chance that the new show will garner a bigger, casual audience who will likely already be lost-in-lore even before this latest scatological entry.

There are three episodes left in this mini-series. The clock, more than ever, is ticking… 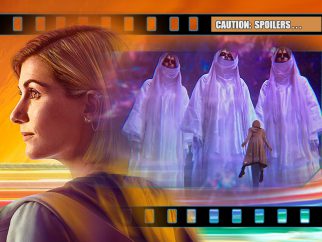