Doctor Who: The end-run begins in a cosmic, but scattershot Flux…

Can a packed final full season of Whittaker and Chibnall 's era win back the naysayers?

The Doctor is pursuing Karvanista across the universe – but why? It turns out the alien has information she desperately needs, but he’s already heading to Earth, ahead of a massive space-fleet and with dramatic plans for at least one member of the human race – a man named Dan Lewis… who has no idea how his life is about to change. There’s another man looking out from his solitary perch across the galaxy, a woman out of time and running from a Weeping Angel, an arctic outpost about to get an unwelcome visitor and a tunnel in old Liverpool that houses a dangerous secret and a terrible universe-eating force known as The Flux.

All these people and events are being pulled together, though they aren’t aware of their connection as yet.

And somewhere, far across the universe an ancient evil is breaking free and has sworn revenge.  The Doctor doesn’t know him but he knows the Doctor and after millennia of careful planning he’s about to unleash his revenge…

There’s something eternally resonant about Doctor Who. Only this weekend I heard a familiar melody wafting through the house and immediately knew it was the final seconds of Tom Baker’s incarnation in a cable reshowing of Logopolis. A few hours later, I’m watching the new run of Leverage: Redemption and I lose track of the references to the classic BBC show made in the modern script.

But it’s also true to say that the current era of Doctor Who has been getting as many brickbats as bouquets and that, as we head into the final full season with Whittaker in the title role and Chris Chibnall as show-runner (or, at least six weekly episodes… if that can be constituted as a series for a show that not so long ago comfortably ran to twice that length) we have no idea where we’re going next.   The previous season (now over a year ago thanks to COVID) essentially threw a sonic spanner into the show’s fifty-years mythology and created a non stable status-quo with contradictions and questions and leaving a sizeable chunk of the party-faithful caught between puzzled intrigue and furious frustration.

There’s so much in this much-anticipated opening episode (entitled ‘The Halloween Apocalypse‘ ) that it’s impossible to know whether Chibnall is performing the third act of a deceptively epic blueprinted saga, a cosmic course-correction of sorts based on the reception of his work so far, or simply cranking up the Tardis and going full-steam down the mythological rabbit-hole and flipping one final finger to the event horizon.  We’re constantly darting around time and space and there’s almost no connective tissue as yet, no firm ground on which to get our bearings or form a considered opinion. So many threads are being pulled on but as yet there’s no tapestry to see, so many plates being spun that we can’t pinpoint the food being served. That , in some ways, sums up the Chibnall run to date – scattershot. He keeps speeding along, sprinkling in some banter and presenting various tales that often recall previous entries. It often lacks the huge-scale stakes of Russell T. Davies showmanship and the smart (sometimes too smart) conundrums of the Moffat era, but sometimes feels like it’s trying to emulate them with plot devices.

Chibnall’s first season steered away from pre-existing threats, but count the adversaries here: Weeping Angels, Sontarans, mentions of the ancient Gallifreyan ‘Division’ that got name-checked in last season’s finale, then there’s ‘The Swarm’ (who seems to know the Doctor of old – very old) and Karvanista, a member of the dog-like Lupari race, a character whose dodgy prosthetics  inevitably brings up less than favourable comparisons with Spaceballs’ Barf (John Candy). We’re introduced to an isolated Arctic observation  base named ‘Rose’ (a little on-the-nose if it’s just an easter-egg tribute). It’s hard to get the Weeping Angels wrong – their impact and methods are innately frightening and one of the show’s key creations. The Sontarans, once an intimidating, if not always brightest race ,have largely being the comedic relief in recent years – Dan Starkey’s Straxx was fun but not fierce. Here Chibnall (and Starkey voicing another of the Sontaran race) largely thread the needle, making their dialogue genuinely aggressive though intentionally awkward, though we’ll have to see how they fare under greater exposure in next week’s episode.

The much-heralded introduction of Dan (John Bishop) is well-handled, showing him as a kindly everyman – humble and downtrodden but doing good for others and muddling through and there’s some fun when Karvanista’s ‘weapons’ don’t seem to work on him. It might all fit the Scouser stereotype, but he does it with a smile and could be a real asset to the show depending on how he’s used. (And it has to be noted, a slimmed-down Tardis crew works so much better). There’s brief introductions to solitary observer Vinder (Jacob Anderson) and Dan’s potential girlfriend Diane (Nadia Albina) alongside some unexplained tunneling and characters inexplicably fretting in old Liverpool. For me, the most interesting supporting character is ‘Claire’ (Britannia‘s Annabel Scholey) who recognises and approaches the Doctor and Yaz on a darkened Liverpudlian street, but realises that the time-traveller has yet to meet her – it’s one of those wibbly-wobbly, timey-whimey chronological paradoxes so beloved by Steven Moffat (most famously used in Blink and to a long-game extent with River Song ) and seems full of promise. Claire could be hugely important or just – as we glimpse later – another victim of the Weeping Angels (heck, she could even be the Fourteenth Doctor taking ‘the long way home’) but it looks like we’ll have to wait to see her first/next meeting with the Tardis crew.

The Tardis itself seems to have seen better days, with several elements breaking down and almost literally ‘bleeding’ inside. Ironically, the rearrangement of its doors and structure makes the interior more interesting than it’s been for a while – more recently it’s looked like the winning entry in a Blue Peter competition made real but on a budget.

Dog-prosthetics aside, the VFX were of a generally high standard. The opening salvo with the Doctor and Yaz trapped, hanging upside down above an acid-sea is largely played for laughs rather than physics, but speeds along so fast you only just see the obvious seams. Liverpool of the 1820s is realised in brief but wide-scope detail. New villain The Swarm is played first by Sam Spruell and then Matthew Needham who sound a lot like Paul Bettany (and who thought this might actually be The Master?)and has interesting, evolving prosthetics but it’s his method of killing that really leaves a strong, visual impression. We barely get to meet Swarm’s guards, but in the brief dialogue we do get there’s a well-pitched pathos to the fact that someone who’s given their lives to the service of their job literally then gives their life having failed at the final hurdle.  The Flux itself is an impressive wave of swirling matter – a collision of two universes or merely a meta-rewriting of the old one? –  feels cosmically large and dangerous as it consumes entire planets in a way that would make Galactus envious, but we’ll see if that presence continues over the coming weeks. It’s not the high-end VFX we’ve come to demand from large-scale US productions and movies, but not awful compared to earlier eras of the show. VFX, though, often hide cracks in the plotting.

One major complaint is the sound, particularly with dialogue. and seemed to run through significant parts of the running time. There’s an array of Northern British accents (Yorkshire, Liverpool etc) which work fine to my ears – even in the ill-fitting case of Karnavista – but which might have slightly troubled those further afield. But it was more the uneven acoustics and the words being muffled and lost in the mayhem that produced the greater challenge. If you’re watching without subtitles then there might have been places you got lost or had to rewind BBC iPlayer to catch important references.

There’s still five more episodes and three specials from the current team and with a year to go, this Season 13 opener this feels like throwing everything at the screen without a clear indication of what’s to come, so it’s  impossible to truly evaluate in isolation. If you’ve fallen out of love with the show then there’s plenty of handwavery plot points of which to be critical (and plenty of places to voice that opinion, though some seem to be reveling in their pain) and if you love it then there’s still elements to entice and reasons to cross your fingers, though some seem too forgiving. Nowadays, chances are… you’re somewhere in between, edging one way then the other on a regular basis.

As with Doctor Who through the decades, a quantum of time and space will let you judge accordingly… 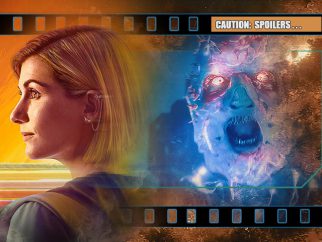