The new Halloween movie is an uneven story of monsters without and within, but ultimately lacks conviction...

Laurie Strode (Jamie Lee Curtis), her daughter Karen (Judy Greer) and grand-daughter Allyson (Andi Matichak)  have finally defeated Michael Myers, combining their hearts, minds and sheer determination to escape the legacy of the murderer who has haunted Haddonfield for generations. Michael was trapped under the Strodes home, doomed to die in their burning basement after being lured there to meet his final fate.

The tenacious local fire department arrive too quickly. Even as the Strodes head to the local hospital to deal with Laurie’s life-threatening injuries, the firemen inadvertently provide an escape route for the killer and he steps out of the fire before killing his ‘rescuers’. On the far side of town, a survivor of the original onslaught all those years ago takes the stage at a bar, recalling the events and warns his audience to always remember and fear Halloween. When the bar’s television notes a new devastation for Haddonfield,  it seems that the terror is back and now everyone is looking over their shoulder, grabbing a weapon and trying to prepare for what’s to come.

But as tensions build and Myers’ killing-spree continues, can the townspeople rise to the challenge or will they become their own kind of monster?

It was never going to be Shakespeare, but somewhere close to the surface of Halloween Kills is a subversive and clever mix of sinew, slash and timely social commentary that engages more than expected through its running-time, only to be sabotaged by a third act that decides it’s having far too much fun to ever bring the iconic horror franchise close to a burial and returns to lack-of-nuance slice and dice with no real rhyme or reason.

A chunk of the film deals with the mob-mentality of Haddonfield residents. What starts as a valiant refusal to be cowed by fear, quickly spirals into abstract violent and panic and a rallying cry of ‘Evil dies tonight‘ led by Anthony Michael Hall (playing  a grown-up Tommy, one of the few original survivors) that proves far more indiscriminate as time goes by. Given wider real-world context, this feels somewhat edgy, even when scenery is chewed. For a long while it feels as if director David Gordon Green is making a statement about how easily good people can find themselves going bad under the thrall of a vague mission-statement, leading to them excusing monstrous behaviour of their own. He’s doing exactly that, but interspersing the more expected elements of the traditional horror film throughout and finally the grand gnashing of moral teeth is drowned out by the sheer grand guignol waving of knives.  That could be forgivable given the weight of the franchise legacy, but the last act becomes so nonsensical – merely a conveyer belt of casual (and often silly, avoidable) deaths of characters that it feels like a waste. Laurie notes that Michael was once just a boy inside the body of a man with the instincts of an animal but has grown to be something more/less, empowered by primal fear and while that’s certainly a powerful description, the film shrugs off that ‘triumphing over fear’ motif and decides to make Michael a literally unstoppable figure – and makes him not an evil shadow but a un/dead weight that breeds contempt through familiarity.

Though always suspect by default – no-one’s ever going to call time on a franchise still making money – the marketing must be held a little to account here. Whatever the trailer inferred or the official synopsis spoke to, don’t  go in expecting that this is the this-time-we-mean-it  final showdown between Michael Myers and Laurie Strode. In fact, not only isn’t this a final showdown, there isn’t any showdown at all. Revealingly, Jamie Lee Curtis shares not a single new scene with the masked monster and is confined to a stretcher or hospital bed for almost the entire movie… and though the film gears up for some anticipated final assault, it never happens. Curtis is little more than a detached narrator, never within a square mile of her tormentor and reduced to talking about the nature of evil to anyone who’ll listen and whose many enemy this time is dodgy abdominal stitching.  In fact, by the time the credits roll, it’s quite deliberately the film is opposite of any kind of ending: a shrug that says ‘Nothing can stop this guy, so why should we stop?”

There are moments in the film that initially feel like potentially interesting misdirection. In several scenes Michael arranges the dead bodies in almost a theatrical way, hardly the kind of post-mortem flourish you’d expect from this lumbering killer. For a while, I was convinced that Green had employed a sleight of hand and that the other escaped mental patient / prisoner (because in such films the difference doesn’t exist) was actually dressing up as Michael to commit some of the crimes, even while Michael himself roamed around creating more primal devastation. This would have made sense and spoken once again to mobs not checking their facts before wholesale retribution ( as well as leaving a slither of an exit for future films) and to the way fear and evil deeds can ripple outwards. Instead, said inmate spends most of the film cowering from his pursuers and then takes a nose-dive off the hospital while being pursued by the mob – making a satisfying splat but a less satisfying story-arc.

One of the film’s strengths is its initial connection to the original. It uses slices of existing material or recreating scenes from John Carpenter’s 1978 outing which slide into some unexpected (perhaps unneeded?) revelations about events on the night and remembering legacy characters (though in most cases just delaying their fates).  Part of that connective tissue is the apparent return of  Donald Pleasence in a new ‘flashback’. Though one might suppose it’s impressive CGI face-mapping, the role is actually played by Tom Jones Jnr who already bears an amazing similarity to the actor who died in 1995 (It’s his first acing role though he’s worked as a construction co-ordinator on films such as  The Abyss and The Conjuring). It works pretty well as a slice of nostalgia. On the flipside, the film is all for equal-opportunism in the victim department, severing the ties (jugulars, eyeballs etc) of  legacy characters, new characters, a inter-racial husband and wife and a gay couple (Big John and Little John) as we move forward…

While the 2018 Halloween felt like a worthy underlining of the original and had some genuine impetus, empowerment and star power as three generations of the Strodes overcame their fear and legacy and beat Michael through force of will and smarts, there’s far less to recommend here – in fact, it undoes some of Green’s previous triumphs. Good actors are wasted and, worst of all, it’s just not scary enough – there’s almost no genuine tension, just ‘anticipation’ of yet more kills and those come in ways that might be more explicitly visceral than the 1970s but are more likely to invoke a stifled ‘ewww’ and laughter than terror from the audience. Ultimately, Halloween Kills is a two-headed monster in which both personas are battling for supremacy… and the lesser one wins as the other gives up the ghost. Never mind the quality, pass the blunted cleaver.

Green’s ‘final’ chapter in his ‘trilogy’, Halloween Ends, is due in 2022. And if you believe that title, I have a set of solid gold steak knives to sell you… 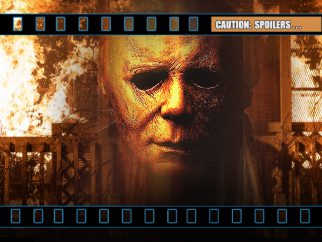 Fandome Event unleashes a ‘Better Tomorrow’ for its heroes..?