There's craven images and cravings involved when the spirit is willing but the flesh is... tasty?

With David’s ordination mere days away, his friends and family from within and without the Church gather to celebrate his last ‘free’ days. David is full of doubts about the impending changes in his career and life and struggles to deal with the difficult choice he must now make.

In the meantime, medical student Mitch Otterbean who is worried that he suddenly has an attraction and compulsion to eating human flesh. He’s understandably concerned and has not given in to temptation but it’s becoming almost impossible to resist the visceral need for it. He’s seeking help from the Church and Ben, David and Kristen have theories about the origin of the craving. However their help and assistance meets with various obstacles including something unpleasant in the abandoned medical halls and also from the deliberate interference of the newly ‘exorcised’ Leland, whom the Church thinks can be of help (far from it).

As certain truths about the ‘sigil map’ are revealed, it appears that heavenly callings and earthly needs are about to collide…

The finale for the second season of Evil – penned by genre legend Rockne O’Bannon – is both fun and frustrating, reveling in its streaming home’s lack of restrictions (compared to network no-nos) but perhaps reveling just a little too hard this season at the expense of a firm enough grasp on its meandering rudder.

The titular, but rather side-story about the cannibalistic med student is more a device for revelations about the sigils that have been appearing on the show for sometime and were on the map stolen from Leland’s apartment. We find out by episode’s end that the sigils represent the 60 infernal houses that are doing their best to spread chaos and darkness in the world and that each generation’s leaders of those houses pass on their duties when the incoming leader has to eat their flesh (ewww). Sheryl seems very much to be at the heart of it all, which makes one wonder if the whole Bouchard family already share a causal link to proceedings.

There’s a fun pre-ordination party for David that’s more of an excuse to get all of the main characters in one place to celebrate. It’s a little ‘staged’ (the inclusion of Kristen’s kids doesn’t feel that organic with all the beer flowing, though the script – as ever – makes them feel very real and interesting siblings) but there are several important side conversations… between David and Kristen and Psychiatrist Kurt and Sister Andrea that show how rich the characters can all be when written well. Several other scenes – including the gentle ribbing Ben gives David on his decisions, a better look at the Pop-Up Book of Terrifying Things  and the moment when Kristen and Leland confront each other are also skillfully amusing in execution.

Everything pointed to David not going through with the ordination – not because of his lack of faith in God, quite the opposite – but more of his lack of faith in the Church, its sometimes political priorities, its lack of perception over the danger represented by Leland and David’s own all-too-human feelings.  (This is a show that seems to have a handle on the nature of faith but is all too aware of the foibles of the Church and never afraid to cast shade where its due). Throughout the episode, we saw little snippets of David’s troubled psyche, particularly aspects of the flesh which were presented in brief but definitely not-network style. He was also pursued by what looked like a very real demon. The ever-wise Sister Andrea pressed him to fight within the Church’s mantra and ceremonial restrictions, though it was clear he resented the blinkers of the institution at the same time as he began to glimpse the real horrors beyond it. However he does complete his ordination, only to be confronted by a distraught Kristen who was on the verge of repeating her Mommie Dearest actions and killing Leland to protect her kids. What happens next is an interesting take on the Church’s confessional duties. David is able to provide the spiritual release Kristen needs, learning of her earlier violence (though not, it has to be noted, any mention from Kristen about her recent extra-marital behaviour) and being able to act as a way for her to deal with some of the guilt. It’s almost literally a ‘Come to Jesus moment’

And yet… on the very day David gives up earthly delights, that outpouring of emotion between him and Kristen almost inevitably leads to complications. The episode closes out with David and Kristen finally kissing. It’s not salacious not titillating, nor seedy like Kristen’s pre-exorcism encounter with a sleazebag from a few weeks back – this is more an expression of extreme emotion that feels honest in the moment. It’s a valid element in the discussion of temptation and sin, but there’s a danger that however well acted and written, it  still feels a little soapy with everything else of import that’s been going on. Equally the fact that Leland has been talking with the Bouchard kids (hence the ominous ‘Daffodil’ note) and the kids weren’t smart enough to mention it until it could be a dramatic finale plot-point, seems a bit hokey too)

However on more solid ground, there’s a reminder of the show’s genuine horror aspects with the cannibal scenes and also when Sister Andrea encounters a demon herself and it looks for a second that we might lose the show’s most interesting addition (thankfully you should never underestimate a wimple!)

Again, this intelligent, funny, subversive and compelling show’s problem is the sheer ‘mass’ of the plots, rather than denominational kind of mass to which it eludes.  We have moment on the sigils and the David/Kristen chemistry, but… a few weeks ago the series suddenly remembered the fertility storyline and pursued it for two episodes with vigor only for it to casually drop out of sight again. Forgotten with the same speed are Lexis’ tale of a tail seems non-existent and Ben’s problems with a possible twin dilemma. Frankly this could still be the series fatal flaw. We’ve previously noted tall those story-strands and said that it was highly unlikely all of them would be resolved before season’s end. As it turns out, almost none of them get any real resolution as C is for Cannibal nudges a few elements forward with some satisfying movements but still with very little clarity towards the endgame or how they might dovetail into that. Though a third season is guaranteed, it continues to be a dangerous game for a show that excels at nuance and perceptions but all-too-often seem to be preferring to ask more and more questions than to give any real answers. Faith without proof is one thing, indefatigable mysteries without answers are far less satisfying. 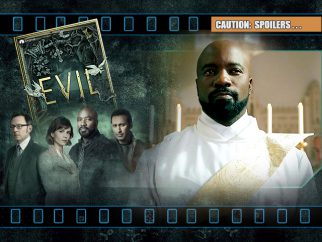