In the second and final season of TWD spin-off 'World Beyond', the young characters are still divided...

Hope (Alexa Mansour) has been taken by the CRM and her one hope is that in going with her ‘captors’ she’ll protect her sister and hopefully establish what has happened to their father.

But CRM commander Elizabeth Kublek isn’t going to make that easy – there’s a challenge she wants Hope to complete to prove her worth and her loyalty, though it might also cost the young girl her life.

Meanwhile Iris and Felix have to decide their next move. Reunited with Will, but still in danger from CRM troops, they have to balance their desire to get to Hope with the dangers they could bring on their new sanctuary… and with the truth starting to emerge to all the survivors about what happened to their campus and who was responsible, all bets are off…

When The Walking Dead: World Beyond was gearing up, there were a lot of skeptics. The early word made the concept seem like it would be TWD but with feelz… essentially a branch of the wider Walking Dead tree aimed specifically at a young and hip audience. The description was of a ‘group of teenagers who’d grown up during the apocalypse, characters with only the vaguest memory of what had come before’. Some wrote it off as a feint to another demographic that wouldn’t play out as anything major within the larger framework.

Though the earliest marketing probably added fuel to that fire, skeptics may have been pleasantly surprised when the show actually hit screens. Yes, the cast were indeed much younger than the main two shows and there was a Breakfast Club of stereotypes that could easily have been mishandled… but  the actual drama and tone was largely pitched to the existing audience and as things progressed, the world might be ‘beyond’ but it was familiar. This was clearly happening in the same universe we’d come to know and watch. This wasn’t TWD-lite so much as TWD from a different zip-code.

The first season finale of The Walking Dead: World Beyond only aired in November 2020, but given all the pandemic news and shuffling of schedules, it somehow feels a lot longer. It’s a bit of a shame, then, that the opener for Season Two really  gives us a brief recap of what  we need to remember about who is where and doing what. (Nor does it feature the whole cast: Ted Sutherland’s Percy is AWOL. Nicolas Cantu’s Elton and Hal Cumpston’s Silas are name-checked but not seen beyond that). Instead we’re dividing ourselves between two locations. There’s Hope’s arrival in the CRM facilities alongside Annet Mahendru’s duplicitous  ‘Huck’. Huck was exposed as a double-agent for the CRM last season and is no less than the daughter of their stern-faced commander Elizabeth Kublek (Julia Ormond). Hope has been promised she can see her missing father if she co-operates, but instead Kublek says she needs to test her loyalties first – basically letting Hope go, but placing her in an infested area that she’s unlikely to survive without help. Kubleck says she wants Hope to see why the world needs saving and how far it’s fallen, but there’s no guarantee Hope will survive.

While there’s some dramatic tension in the situation and a in/convenient bump to the head gives her a concussion that makes her survival even more difficult and allows lens-distorted hallucinations to punctuate the story, it’s hard to believe or fathom exactly why Kublek would take such a risk. The CRM may be all a’bluster over abject pragmatism, but it seems unlikely that Hope dying would serve their greater strategies in any real way. Had it been revealed that fail-safes to ensure Hope’s survival, even if she didn’t see them, that would have been more rational. That being said, Ormond’s character is rapidly becoming the bad guy that you hope gets some sort of comeuppance before season’s end.

Our other location is with Aliyah Royale’s Iris Bennett and Nico Tortorella’s Felix Carlucci as they reconnect with Felix’s missing-presumed-dead boyfriend Will (Jelani Alladin) who’s been taken in by a local community. The trio now have to walk a delicate line between not endangering their sanctuary and putting its people at risk and yet still finding a strategy to get to Hope. Much of the episode is coming to that realisation – and with Iris’ waking dreams being a counterpoint to Hope’s flashbacks.

World Beyond is a lot better than some believed it would be and there’s potential for it to work well – but there’s also a danger it will simply be used as filler and background noise – and this final run will establish which way it goes. That two-and-out schedule actually serves a good purpose – one could see World Beyond being stretched out and artificially extended if it was too open-ended. Instead we’re likely to see a corner of the larger TWD jigsaw completed in a more succinct way that should play an active part in what’s to come. That could also mean a higher body-count. Given the reappearance of Pollyanna McIntosh’s  Jadis in the ‘This Season on…‘ sneak-peek, last seen boarding a helicopter with the severely-injured Rick Grimes, there’s obvious a through-line to Rick  and though he’s unlikely to appear any time soon, it feels like this show will have something to say in that regard (or provide hints about) before we’re done. 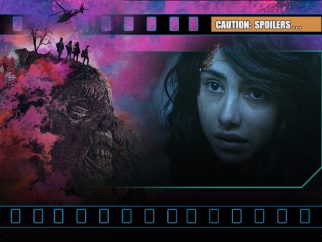