Decisions, decisions. It seems no good deed goes unpunished as plans are made to defend and attack...

Negan Maggie and Elijah hatch a dangerous but familiar strategy to get them closer to their lost supplies and through the Reapers’ boundaries, Daryl and Leah discover a survivor in the woods and Eugene makes a split-second decision that proves that no good deed goes unpunished.

There’s definitely a feeling of ‘another calm before another storm’ in this week’s The Walking Dead – the plot inching along as our various groups of characters make plans and start to execute them but with no major milestones quite yet. It’s essentially all post-apocalyptic prep-work – though its strengths come with some interesting character-moments along the way.

Daryl and Leah are out hunting again and come across a desperate man trying to find aid for his family. Though told by Pope to kill him, they decide to check out his story. They find his wife and daughter, though it’s clear that his wife is dying. Leah agrees to let the man and his daughter go, on the promise they never return or expose her act of mercy. However when it comes to killing the mother – who has long accepted her fate and is almost glad that her husband and daughter will now have no reason to stay and risk themselves – Leah can’t pull the trigger. That seems a little off for a tough woman who has held her own in a group of mercenaries, but it’s Daryl who sees it as a sign Leah still has her humanity… and it’s Daryl that ultimately ends the wife’s life, quickly and painlessly with a well-placed arrow. He almost confides his loyalties to her, but a call back to base intervenes.

That call reflects that there’s an apparent zombie horde heading their way, which has actually been orchestrated by Negan, Maggie and Elijah. Taking a page out of the Whisperers’ play-book, they’ve disguised themselves as zombies, skin-faces and all and see the horde as a way to get closer to Pope’s base and retrieve their needed supplies. It’s a brave plan, one not without its psychological obstacles and Maggie is very uncomfortable at first, partially because of the skin-issue but also because she knows Negan is more experienced with this tactic. It leads to a very resentful rapprochement between the two and a promise that Maggie withdraws her intention to kill Negan, which she agrees to but doesn’t know whether she’ll be able to abide by for long. Jeffrey Dean Morgan once again owns most of his scenes and Negan’s strengths as a character remain in his brutal honesty. When Maggie asks if he actually has any regrets about killing her husband Glenn (and Abraham) in that classic baseball-bat moment that forever changed the comic and show, Negan admits that he does have regrets. If he could go back and change that moment, he would… he’d kill them ALL. Maggie’s naturally horrified, but Negan reminds her that Rick and his team had just pre-emptively attacked his camp and also killed his men, some of whom had families and that he’s a pragmatist… like them he would have struck fast and hard and pre-emptively to save his own, he’d have just done it more efficiently. It’s quite the powerful moment.

Gabriel, the turbulent priest is off on a scouting mission and comes across the Reapers’ priest. It would be an easy kill for him, but given that he hears that priest talking aloud to God, he hesitates, ultimately remaining hidden. It’s an interesting character moment – Gabriel, despite continuing to wear that clerical collar, has felt untethered from his faith in recent times and perhaps feels it’s not his place to kill another ‘man of God’ even if that man is on the other side. After all, Gabriel’s actions recently have been far more Old Testament than New.

There’s one bit of very interesting groundwork. The appearance of Pamela Milton’s son may seem like a minor plot-point for those viewers not familiar with the dying days of the source-material comic. SPOILERS (obviously)/  Sebastian Milton (Teo Rapp-Olsson) seems to be just some spoilt little rich kid, almost a caricature stereotype of the over-privileged, condescending upper class. But to those who read the comic, they know that Sebastian’s seething resentments and lack of moral character eventually lead him to petulantly kill Rick Grimes, murdering him in cold-blood – so while Rick is long gone from the show (if not the franchise), there’s every reason to feel uneasy that Sebastian could prove to be that wild-card that topples the entire deck. Certainly Eugene, who had just saved Sebastian’s life (ungrateful though the toff was) was quite right to then punch him out given the circumstances – be honest, few people would be able to resist – but it’s dramatically interesting how the scale tips in that one impulsive action… Eugene could have got anything he wanted for saving Milton’s son and now he’s effectively lost it all because we know Sebastian’s not going to let it lie). 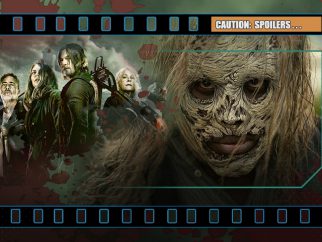