Hill House / Bly Manor's Mike Flanagan brings another type of 'horror', a dazzling and dark treaty on the power of faith...

After serving four years in prison for a drunk-driving accident that killed a young woman, Riley Flynn returns to the island community of his childhood. He’s a man adrift, shamed by his actions and not sure what to make of his life. His return is less one of desire, but more a condition of his release and he immediately feels the weight of expectation from his loving mother and distant father – as well as his now grown young brother. However Riley does renew his friendship with possible soul-mate Erin, a newly expectant mother who’s fled a bad marriage to return home as well.

On the same ferry is a man who introduces himself to the islanders as Father Paul, replacing the island’s aging Monsignor Pruitt who has been apparently unwell since his return from the Holy Land. An enigmatic but compassionate man, Father Paul knows how to deliver a sermon and wants to restore religious faith in the often traditional but distant islanders… and to make sure his pews are fuller every Sunday and not just on major religious holidays.

But soon strange things began to happen on the island. A girl miraculously walks again, a woman with dementia begins to see things more clearly and people begin to feel generally more healthy and revived. However others feel the touch of tragedy and despair and an unease at the unexplained events.

Some see hope and light, others, danger and darkness.

They may both be right…

When The Haunting of Hill House debuted a couple of years ago, it instantly (and rightly) became a modern classic – a haunted house story that was  beautifully, intricately, heartbreakingly and expertly blueprinted over the course of ten episodes, each building on the last.

Now creator Mike Flanagan  gives us another haunting tale, albeit one that is quite different in subject and played out on a slightly larger scale, an isolated fishing community rather than one singular abode.

Like its predecessors, it makes the most of its location and raft of characters… it feeds you information through character-moments, sometimes reinforcing its ideas and sometimes subverting them as tensions and consequences start to build and a bigger picture starts to form – the whys and hows to the initial whats and whos.  It’s entirely possible that by the end of the second episode, you’ve figured out the larger conceit at work and which particular branch of the horror genre we’ll be following – but unless you’ve been more fully spoiled about the events that follow, that probably won’t prepare you for some of the narrative twists still to come.

It’s best to watch without spoilers, but some are inevitable in a review – so if you haven’t watched the full mini-series yet, my advice is to do so before continuing. You’ve been warned.

Though Bly sometimes felt like it was Hill House‘s acting troupe given a new production with similar material (though still a strong mix), Midnight Mass stands a little separately. Yes, there are some familiar faces back in the mix, indicating its lineage, but this is the first of Flanagan’s productions not to be based on pre-existing material (The Haunting of Hill House was inspired by  Shirley Jackson’s novel of the same name and The Haunting of Bly Manor was inspired by The Turn of the Screw by Henry James) and he provides the old and new cast with material that feels less confined in structure. This feels like a superior Stephen King story, the mesh of characters, their motives, the mundane aspects of daily life and the profane, all expertly balanced.  Yes, given revelations that quickly  come – and though the word ‘vampire’ is never formally uttered – it has echoes of King’s seminal Salem’s Lot but, impressively, doesn’t remotely suffer in that comparison. One of the few commendable things in the otherwise forgettable Dracula 2000 feature was the linking of Dracula to Judas (hates the cross, allergic to silver… it all makes sense etc). Here that theological analogy takes on an even more profound link… given room to breath and flex with the idea that in a desperate, confused state, the darkness of the demonic can be mistaken for the light of the angelic. Monsignor Pruitt  stumbles into ancient ruins and emerges rejuvenated by the beast within. A holy man made immortal by a winged creature perceives it as a calling from a divine being to spread its ‘word’.

There are so many moments throughout the seven episodes that keep you glued to the screen. Early on, the style in which Flanagan shoots his scenes and the material – the way the camera movies or the angles chosen – invokes some of the interesting moments of Hill House and it would be tempting to think that this is Flanagan sticking to enjoyable but safe stylistic ground. It’s not… and his style evolves throughout the run, making good use of the more open scenery. There’s some obligatory jump-scares along the way, but the strength comes from the character-moments, scenes that give impetus to supporting players. If some of their recollections and monologues occasionally seem too ready-made for an epic-tale and perhaps just a tad like stage-craft, only a handful of times threatening to creak under such psychological check-list of emotional baggage,  then they are still delivered with conviction and with the little nuances from the performers and script that make it all work.  It’s very clear that the subject-matter here – we have scenes involving self-esteem, culture-clashes, tales of abuse, regret and disappointment and somehow the mini-series also manages to encompass 9/11, religious and sexist bigotry and general culture-clash – is deeply personal and meaningful to Flanagan and his ideas of faith and tolerance (yet giving equal weight to other views) and it shows in every word.

We expect Zach Gilford’s Riley Flynn to be our rudder through the story, but it turns out to be very much an ensemble piece, with Flynn’s actions before and during the island drama acting as a rudder and lightning rod for what comes later. Gilford portrays the shame and regret of Flynn, prone from his years in prison into looking down rather than up, a broken man returning home not so much for redemption but to see what is left of him as a man. You feel his weight in every scene, but it’s a later scene, voiced by his mother that sums up his strengths rather than his weaknesses. Kate Siegel as Erin Greene plays a very different type of character than Hill House‘s complex Theodora, but has a quiet determination that grows through the story. She regular collaborates with Flanagan – her real-life husband – but each time brings something new to proceedings.

Hamish Linklater is just stunningly good as ‘Father Paul’, the priest who brings the darkness to the island under cover of light – and Linklater imbues him with an inner conflict writ large and one that means you often find yourself hating his deceits but not hating the man’s motives… rather pitying him for the way his faith has blinded him to the otherwise obvious profane powers that work around and through him. Even at his most compromised, he is as much a victim as many of the others who cross his path.  Samantha Sloyan also gets her teeth into the role of compromised and fanatical Beverley Keane, the kind of character that finds justification for all sorts of fanaticism and self-absorbed behaviour under cover of religion and will have you hating the character but loving the performance. There are other strong roles for the likes of Annabeth Gish and Robert Longstreet (returning from Hill House), Rahul Abburi (who played Owen in Bly Manor) and Henry Thomas who was in both.

Gripes? Perhaps there are just a few too many extra characters who hover around the fringes (Gish’s same-sex partner has one scene then vanishes and isn’t even referred to again and Gish’s Sarah seems to not give her a passing thought amongst the chaos that follows) and maybe it could have been just a little tighter at six, rather than seven episodes, but these are minor gripes when the central core is so interesting.

There are good directors, good writers and good producers – all essential to the  finished result. But it’s truly rare that you get a person who excels at all three to such a degree that their work stays with you not just on viewing, not just around the water-cooler, but long, long after. On the strength of his  Hill House and Bly Manor outings and now this tour-de-force,  Mike Flanagan – whose perfectly decent big-screen features have included  Absentia (2011), Oculus (2013), Hush, Before I Wake and Ouija: Origin of Evil (2016), Gerald’s Game (2017), and The Shining sequel Doctor Sleep (2019) – has now scored a trifecta of even bigger television/streaming success on multiple levels. He’s a man either  at the top of his game or merely the start of a stellar, continuing career if he continues to play to his tapestry-weaving methods.

Midnight Mass might be less tight in its focus, but it’s searing in its scope and quite obviously his most personal work to date, surgically dissecting attitudes to life and death as much as faith and fortune.  One thing is certain, in a year of quality and ambitious television, this stands high and I can’t wait to see what Flanagan brings us next. 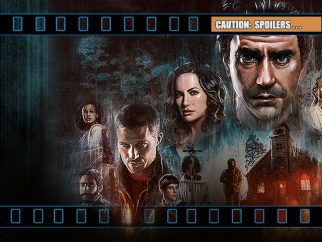 La Brea’king Bad. Template show is another land of the LOST…