Divided from each other, the various groups face different challenges in their pursuit of resources and survival...

Divided from each other, the various groups face different challenges in their pursuit of resources and survival. The situation for Alexandria is getting more desperate and so Aaron, Carol, Lydia and Jerry head to Hill-Top to see if anything can be scrounged from the now desolate enclave… but they don’t find food there, merely unwanted memories of the past. Eugene, Eziekiel and Yumiko enjoy their first full day as part of the commonwealth but find it’s harder to stay out of trouble when they pursue their own agenda to get word home.

After several weeks of more individual character-studies, The Walking Dead‘s latest episode divides its attention across several locations and characters. We’ve left Daryl inside the Reapers’ camp, but turn our gaze between Alexandria, Hill-Top, The Commonwealth and more conversations between Maggie and Negan.  To that extent, all stories inch forward rather than have massive momentum.

Alexandria is in a fairly bad way with fences and walls failing and revealing threats from without and within. Various walkers get through but are dealt with, even though it’s a close-call. But we also get to see how there’s divisions amongst the younger members of the community. We’ve usually seen Judith (Cailey Fleming) as a wise-beyond-her-years character, but there’s a reminder here that however skilled and intimidating she is and however good an influence she might be, she’s at that age where people her physical age (particularly adolescent boys) are likely going to test her. This episode she seems far more the child rather than the adult and though she triumphs, it all feels more playground drama than the more deadly threats outside. Given that Carl survived in the comics and became the centre of the book-ending part of the comics series and that he is long gone from the television show and one does wonder if Judith may end up in a parallel role as we head towards the end.

As noted in coverage of recent episodes, there’s an increasing nihilistic approach to several main characters and this week it’s the turn of Aaron (Ross Marquand) to indulge in what is pretty hard-core torture as he tries to get one of the surviving Whisperers to ‘break’ and reveal if there are any more of Alpha’s old band in the vicinity. This goes beyond intimidation to actually letting a walker bite the prisoner and ultimately getting no more information. Even Carol recognises the line between interrogation and sheer torture, though Aaron doesn’t see it that way. It’s one thing for our ‘heroes’ to take desperate and sometimes very controversial methods to stay alive -and Alexandria is in dire need of food supplies to survive – but there’s almost a casual approach to the show’s violence at the moment and currently, at least in my opinion, it’s on the wrong side of that line if we’re going to remain invested in our characters. Violence should be shocking, especially human-on-human, but now it’s purely punctuation and far too common-place to be as effective as it wants to be.

Eugene, Eziekiel and Yumiko have been accepted into the Commonwealth community but though there are some family reunions and shops selling pretty cupcakes (a clear disparate reality between this and the ‘outside’ world that the episode consistently underlines), the trio know that their actual mission is to find information and help that might assist the community back at Alexandria. Stephanie (the other reason that Eugene travelled so far) says she’ll help them but they are found using the communication relay without permission and taken into custody. There are certainly vibes that the Commonwealth is overly rule-driven (and depending on how the show parallels the comic, we’re going to see more of that), but it’s hardly unfair of them to take action against newcomers who seem to be subverting their restrictions and  – in the community’s eyes – might be planning something far more dangerous. I also can’t be the only viewer thinking that Stephanie (Margot Bingham unrecognisable from her sultry role in Boardwalk Empire) might just be a little too eye-fluttering to be all she seems.

Maggie and Negan are essentially trapped with each and arguing how long they’re going to wait to see if anyone else survived the Reapers’ attack.  There’s only a few scenes, but they underline what we already know… that these two characters don’t like each other but may need each other to survive and that Maggie continues to be somewhat of a hypocrite when it comes to making survival choices. She says she’s a pragmatist, but we now she’ll discard those she doesn’t think deserving if it affects the chances of the group’s survival, but will stand resolute if it’s someone she cares about. She wants to wait for any other survivors, Negan wants to leave and, truth be told, his argument eventually makes more sense when they’ve already waited a long while and Maggie might be on the cusp of agreeing until it’s all rendered moot when Gabriel and Elijah make it back alive. With Alden still hiding in the church with severe injuries, what’s the group’s next move?

Next week looks like another mix-n-match of characters, so we’ll see if they start to converge again… 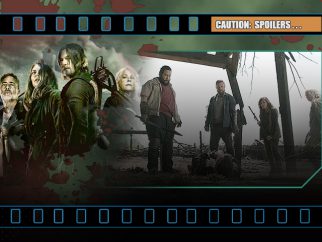