Walking Dead: Daryl’s day is a Trial by Fire, dogged by doubt…

In his fight for survival, Daryl encounters a familiar face behind one of the Reapers masks...

In the aftermath of the Reapers ambush the survivors are scattered, but in this week’s epiosde we follow Daryl as he and Dog travel through the woods trying to assess their situation. However, one of the Reapers finds Daryl and it looks like the man and his dog could be ‘goners’ until the animal responds to the newcomer in an unpredictable way…

Under the Reaper’s mask is a familiar face, but though events offer a temporary reprieve for Daryl, it does very little to ensure his over-all chance of survival. The Reapers, it is revealed, are a long-standing ‘family’ of mercenaries, still under the command of their unit’s leader: Pope.  And Pope takes two things very seriously: loyalty and God.

With such a large cast it’s inevitable that The Walking Dead has to spread out its narrative, often dividing its main cast and leaving one situation on a cliffhanger while it goes out to deal with some other story and to keep all the apocalyptic plates spinning. So after the opening couple of episodes in this run that darted around reminding us of who the main cast are and how we left them, we’ve quickly returned to that divide-and-conquer format that allows the show to present a series of character-studies rather than an ensemble.

When the character of Leah (Lynn Collins) was introduced in the standalone ‘extra’ episodes of the extended Season Ten, it all felt a little ‘off’ – the introduction of a ‘new’ character that arguably had a pivotal role in Daryl’s recent life but whom we’d never heard of before and hadn’t been mentioned in the main run since. We were suddenly told that Daryl found a woman in the woods, overcome the initial antagonism, essentially settled down with her but when she gave him an ultimatum about his ties to the past, he didn’t commit enough to her or in time and she vanished… leaving Daryl to return to our regular cast of survivors and never speak of her again. The acting and chemistry between Collins and Reedus was fine, but it felt adrift, especially as we already know that a Carol and Daryl series is in the works, dooming any relationship with Leah that could have been teased.

This episode Leah is back and, unlikely as it seems, it turns out that she’s heavily in with the Reapers that have been causing so much trouble for Maggie and Meridian. Yes, Leah is actually part of, even a sub-commander of – a group of ruthless masked mercenaries and though she doesn’t wish Daryl any harm directly, his perceived lack of commitment to her hasn’t left her any more warm and fuzzy in the long term. So while the Reapers don’t kill Daryl immediately as they have with so many others, she seems happy to stand by and watch him waterboarded to get information on his fellow travellers. A little like Eugene, Daryl is quite adept at selling a ‘lie’ and towing a party-line (he never told Leah the full truth about his life-to-date) even in the face of disbelief and intimidation from a captor and none of the camp quite know how to figure the truth.  Reedus does what he often does best: look dirty, confused, pissed-off and determined in equal measure – a cornered wolf constantly assessing his escape plan and exit strategy.

Ritchie Coster plays Pope, the leader of the Reapers and is quickly set-up as the main antagonist for at least the first half of this season.  The problem is we’ve had this kind of figure before: a bonkers leader prone to homicidal outbursts and who demands utter loyalty from his underlings under every circumstance… and with no disrespect to Coster, the likes of The Governor, Alpha or Negan (in his prime) had far from charisma and battle-wits than this paramilitary-hued ‘warrior’. It seems that the gang of Reapers, or at least their core number, were all battle-trained long-before the apocalypse, being a military-unit involved in some government-deniable operations in the Middle East. The name-checking of Afghanistan as a failed theatre of war is probably coincidental in a week of real-life turmoil in that area, but it does ring a timely bell… though it does also raise some questions over the specifics of the Walking Dead timeline.  Forgetting the original comics source material, the show itself has been on for nearly eleven years with a balance of long-stretched stories and yet several multi-year time-jumps, so it’s unclear what year we’re currently supposed to be in post-apocalypse and how (and when) prior service in Afghanistan might have been altered by a global zombie outbreak. It could mean that the Reapers would have to have been a fighting force overseas nearly two decades ago, so they’ve devolved quite a bit.

It looks as if we may shift venue yet again for next week’s episode, so it might be a while before we find out if Daryl’s managed to build on Pope’s cautious trust and dodge any bullets coming his way. 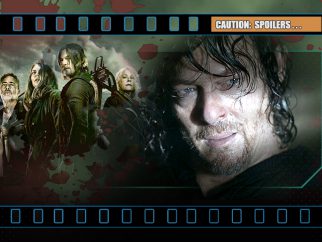 Marvel’s ‘Hawkeye’ trailer: A Christmas present with a bow…